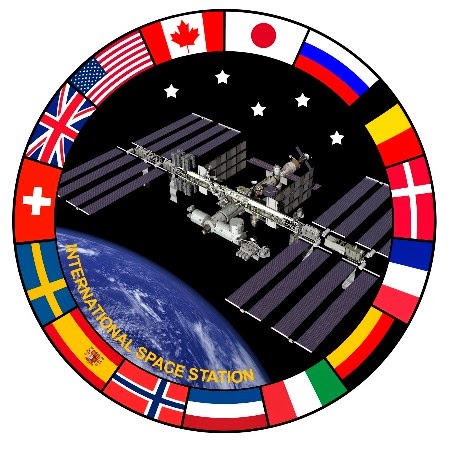 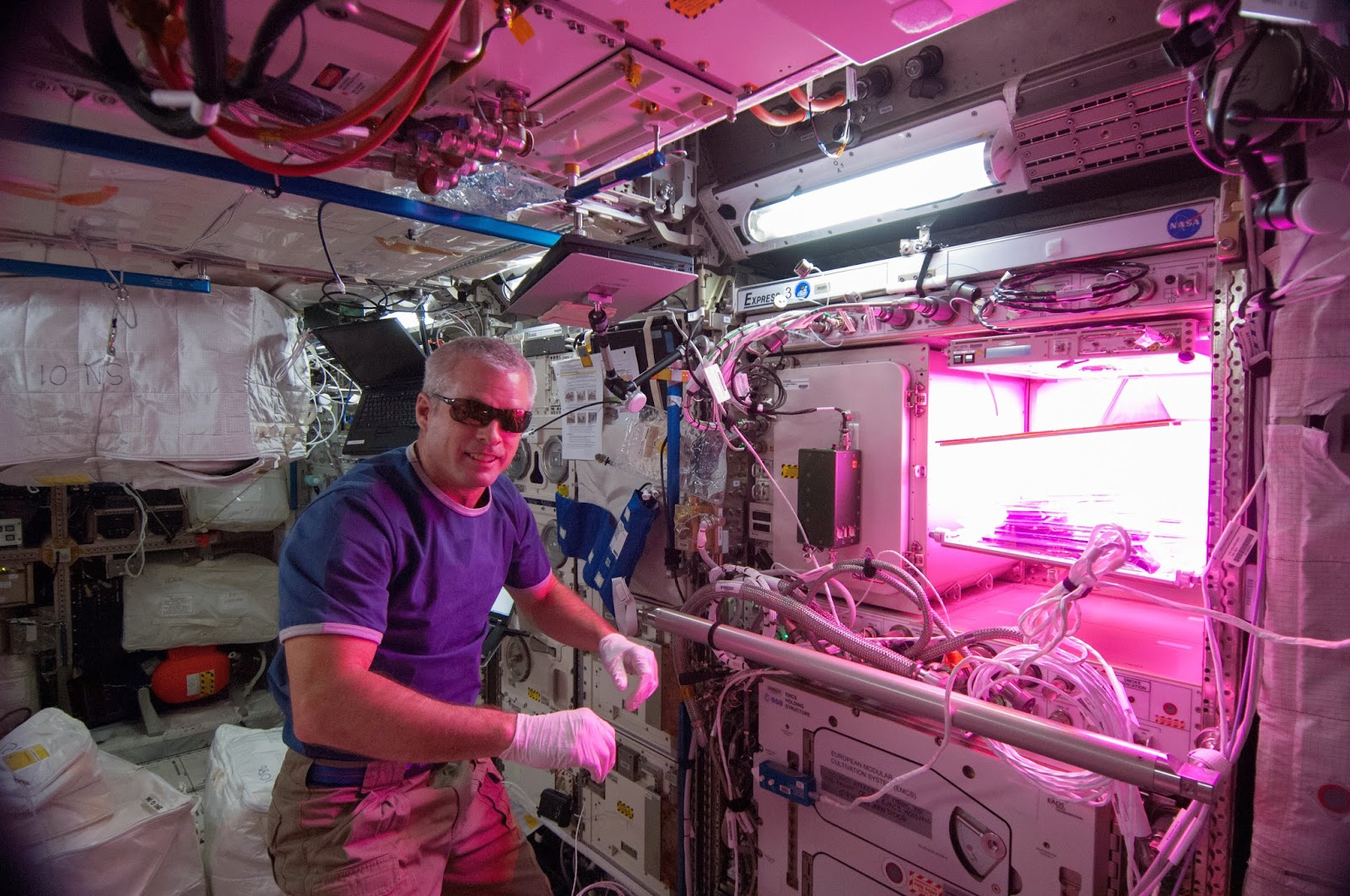 If you plant it, will it grow—in microgravity on the International Space Station? Expedition 39 crew members soon will find out using a plant growth system called “Veggie” that was developed by Orbital Technologies Corp. (ORBITEC) in Madison, Wisconsin, and tested at NASA's Kennedy Space Center in Florida.

The first fresh food production system, along with the Veg-01 experiment, were delivered to the space station on the SpaceX-3 mission from Cape Canaveral in April and transferred to the Columbus module for storage until it was time for in-orbit activation.

Expedition 39 flight engineers and NASA astronauts Steve Swanson and Rick Mastracchio installed Veggie in the Columbus module May 7 in an Expedite the Processing of Experiments to the Space Station (EXPRESS) rack.

Wearing sunglasses, Swanson activated the red, blue and green LED lights inside Veggie on May 8. A root mat and six plant "pillows," each containing 'Outredgeous' red romaine lettuce seeds, were inserted into the chamber. The pillows received about 100 milliliters of water each to initiate plant growth. The clear, pleated bellows surrounding Veggie were expanded and attached to the top of the unit. 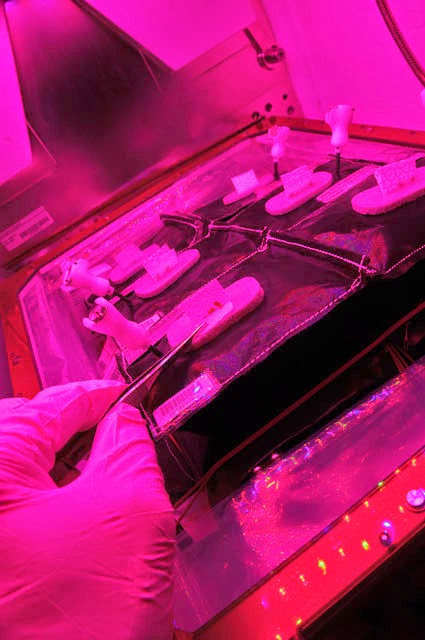 Inside each plant pillow is a growth media that includes controlled release fertilizer and a type of calcined clay used on baseball fields. This clay increases aeration and helps the growth of plants.

Dr. Gioia Massa is the NASA science team lead for Veggie. She sees Veggie and Veg-01 representing the initial steps toward the development of bioregenerative food production systems for the space station and long-duration exploration missions.

"The farther and longer humans go away from Earth, the greater the need to be able to grow plants for food, atmosphere recycling and psychological benefits," Massa said. "I think that plant systems will become important components of any long-duration exploration scenario."

About 24 hours after Veggie was activated on the space station, back on Earth, "pseudo-naut" researchers activated identical plant pillows in the Veggie control chamber in the International Space Station Environmental Simulator laboratory at Kennedy's Space Station Processing Facility. Researchers will monitor the plant growth and perform the same procedures as Swanson is doing on the space station. 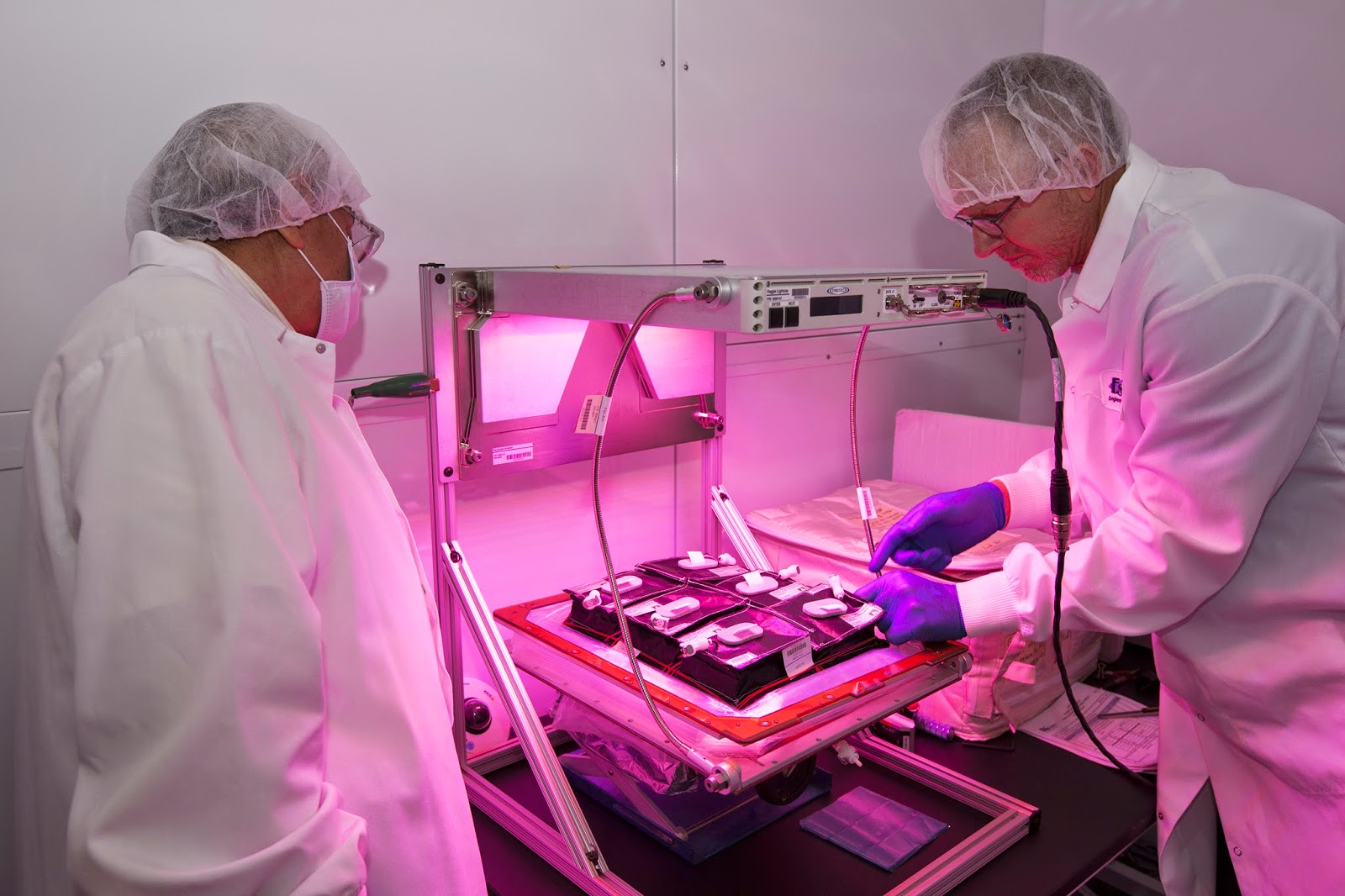 Image above: Researchers activated the Veggie plant growth system May 9 inside a control chamber at the Space Station Processing Facility at NASA's Kennedy Space Center in Florida to shadow the activation and procedures being performed on Veggie on the International Space Station. Image Credit: NASA/Dimitri Gerondidakis.

"My hopes are that Veggie will eventually enable the crew to regularly grow and consume fresh vegetables," Massa said.

One of the plant experiment's goals is to verify the Veggie hardware is working correctly. Another goal is to establish that the space lettuce is safe to eat.

On the space station, the Veg-01 plants will grow for 28 days. Photographs will be taken weekly, and water will be added periodically. The pillow wicks were opened to help the seedlings emerge. As the plants grow, the pillows will be thinned to one plant per pillow, and microbial samples will be taken to check for any microorganisms that may be growing on the plants. At the end of the cycle, the plants will be carefully harvested, frozen and stored for return on the SpaceX-4 mission later this year.

Veggie will remain on the station permanently and could become a research platform for other top-growing plant experiments. ORBITEC developed Veggie through a Small Business Innovative Research Program. NASA and ORBITEC engineers and collaborators at Kennedy worked to get the unit's hardware flight-certified for use on the space station.

"Veggie could be used as a modular plant chamber for a variety of plants that grow up rather than in the ground," said Gerard Newsham, the Veggie payload support specialist with Jacobs Technology on the Test and Operations Support Contract. "This is just the beginning." 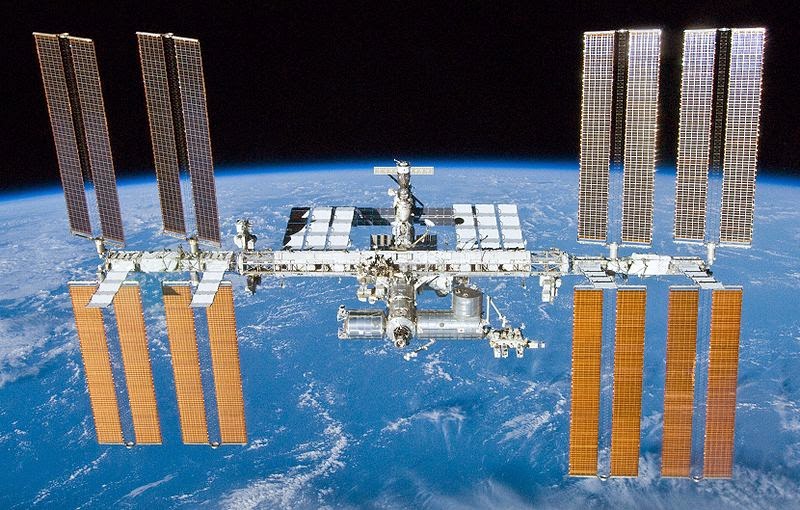 "I hope that the astronauts on the space station eventually will use the equipment to 'experiment' with their own seeds or projects," said Nicole Dufour, who coordinated and led the testing of the flight hardware at Kennedy and wrote the crew procedures for the astronauts to use on space station. "Veggie is designed for crew interaction and to enjoy the plants as they are growing."

Dufour said she hopes Veggie serves as a regular facility the crew uses to grow food crops. Dufour is an engineer in the Flight Mechanisms and Flight Crew Systems Branch of the Engineering and Technology Directorate.

Brian Onate, former Veggie project manager, helped shepherd the plant growth system from initiating the build of the flight units in 2012 to just a couple of months before its delivery to the space station.

"I hope to see Veggie's success as the first step in food production that will allow astronauts on the space station to enjoy fresh food and gain knowledge as we explore beyond low-Earth orbit," Onate said.

The multi-national efforts that go into research aboard the International Space Station show that working together can yield results with universal benefits. This is especially the case when talking about human health concerns such as cancer. Researchers make use of the microgravity environment aboard the space station to seek answers to questions about the nature of cancer cells. With the Microgravity on Human Thyroid Carcinoma Cells (Cellbox-Thyroid) study, recently conducted in orbit, the hope is to reveal answers that will help in the fight against thyroid cancer.

The American Cancer Society estimates about 62,980 cases of thyroid cancer in the U.S. for 2014. The thyroid is a gland in the neck that secretes hormones that help the body to regulate growth and development, metabolism, and body temperature. The Cellbox-Thyroid study is enabled through a collaborative effort between NanoRacks, Airbus Defense and Space, the German Aerospace Center (DLR) and the Center for the Advancement of Science in Space (CASIS) to facilitate the microgravity investigation aboard the space station. 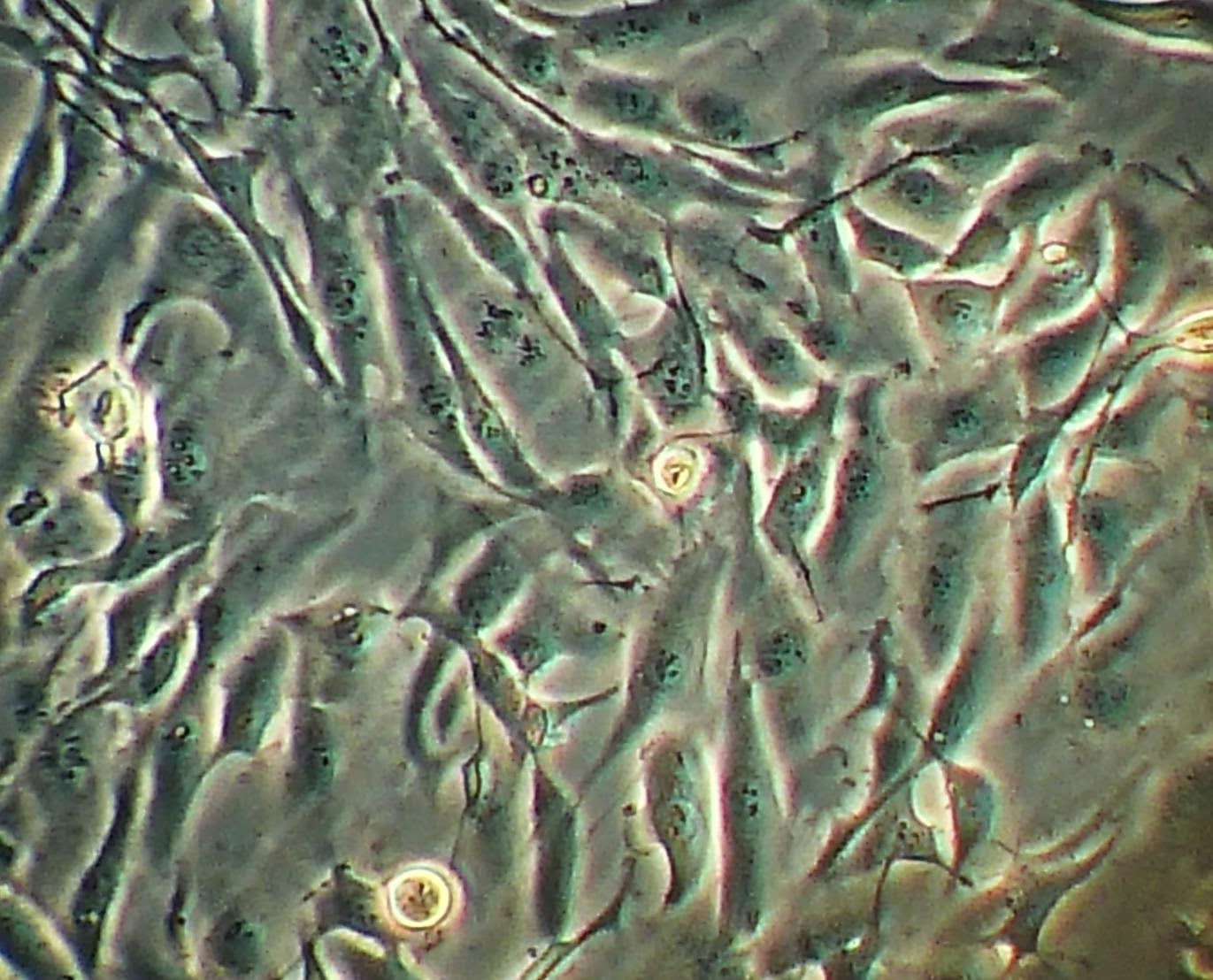 Image above: Poorly differentiated follicular thyroid cells shortly before launch. The cells were then exposed to microgravity aboard the International Space Station for the Cellbox-Thyroid investigation. Image Credit: Daniela Grimm.

“NanoRacks is hosting this German research study aboard the U.S. National Laboratory,” said Jeff Manber, CEO of NanoRacks. “It may well make critical advances in understanding and even delaying the onset of cancer in the thyroid.” 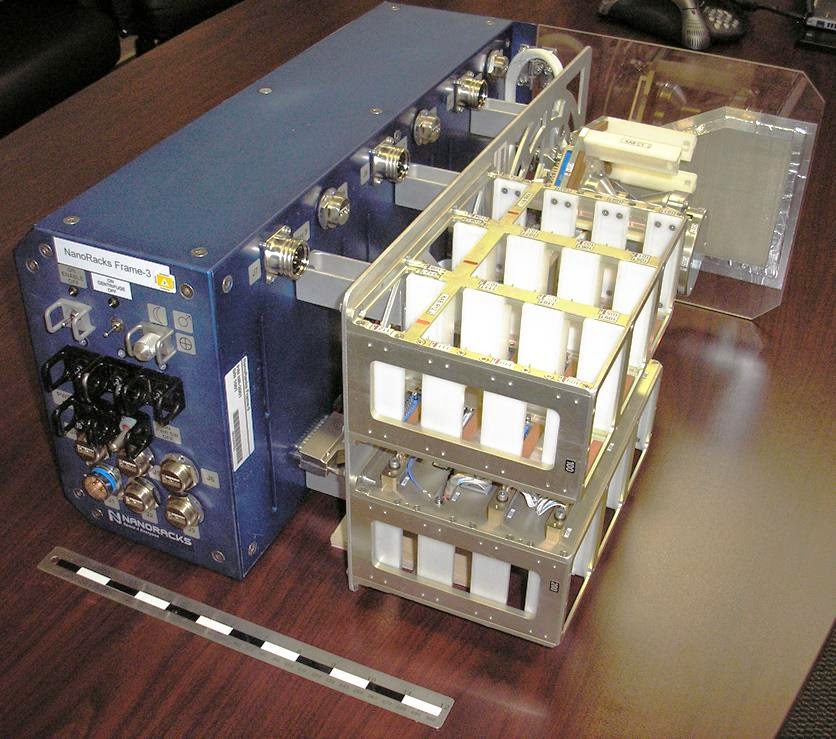 Image above: Nanoracks Frame-3 with the Airbus, Defense and Space Centrifuge for use to culture thyroid cancer cells aboard the International Space Station.
Image Credit: Team Daniela Grimm.

The overall aim of the Cellbox-Thyroid study is to identify new biomarkers and target proteins for use in developing new cancer-fighting drugs. The investigation has roots in research performed in SIMBOX aboard the Sino-German Chinese Shenzhou-8 mission. During that 2011 study, Daniela-Gabriele Grimm, M.D., principal investigator and researcher with the Department of Biomedicine, Pharmacology at Aarhus University in Aarhus, Denmark, looked at cancer cells in microgravity and found that tumors behave less aggressively in that environment. Grimm’s published findings appeared earlier this year in the Federation of the American Societies for Experimental Biology Journal.

“A further important finding was that a tumor grows three-dimensionally in space. The mechanism for this finding will also be investigated in this Cellbox-Thyroid experiment,” said Grimm. This result published in Elsevier Biomaterials 2013.

With the Cellbox-Thyroid study, Grimm seeks to build on her earlier conclusions by identifying the proteins that can be targeted to anti-cancer therapies. Insights into what controls how tumors grow may lead to knowledge for enhancing treatments on Earth. The experiments took place aboard the space station soon after berthing of the SpaceX Dragon on April 20. The samples returned to Earth aboard the same vehicle on May 18 for further analysis by researchers on the ground.

Specifically, researchers are looking for the microgravity environment to reveal an altered gene expression pattern—how the gene’s encoded information directs protein molecule assembly. They also seek to learn about the proteins expressed or secreted by the cells, called proteome and secretome. Isolating how the cell processes work could lead to new thyroid cancer drugs and provide a better understanding of the mechanism leading to cancer development for new strategies in thyroid cancer therapy. 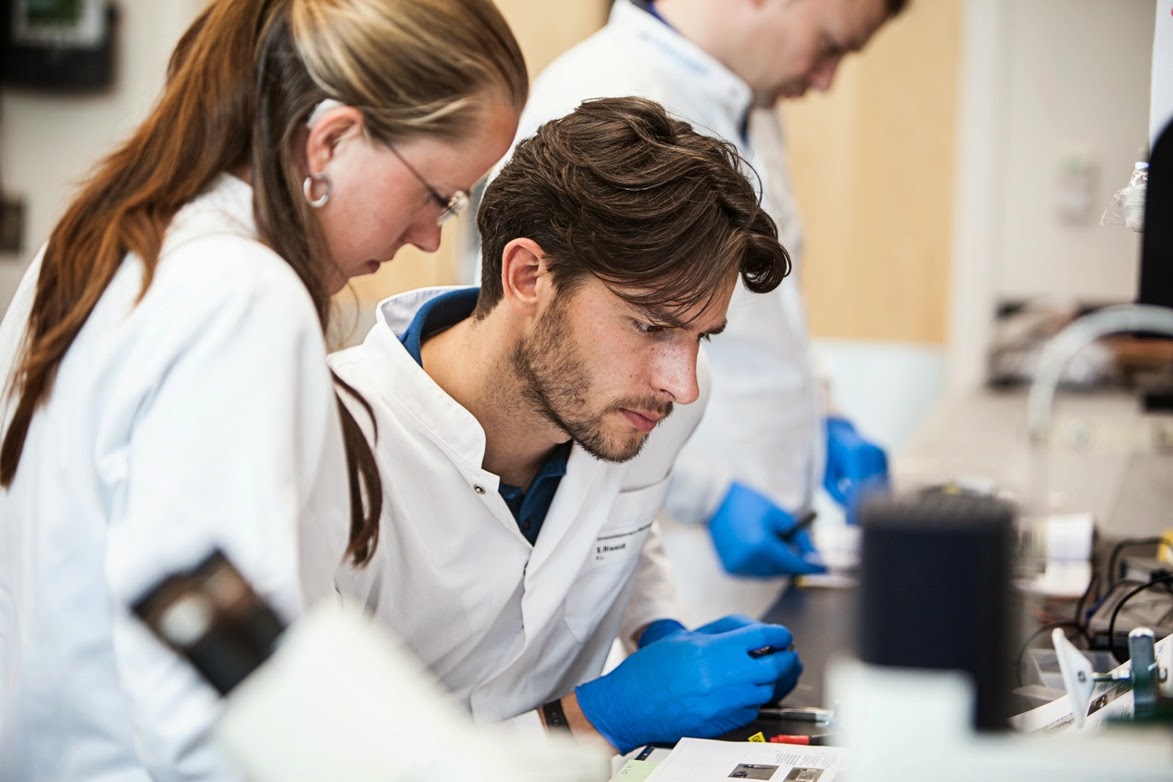 “Spaceflight experiments are of great value for cell biology research in general and for cancer research in particular,” said Grimm. “Our experiments indicate that microgravity induce[s] changes in the expression and secretion of genes and proteins involved in cancer cell proliferation, metastasis, and survival, shifting the cells toward a less aggressive phenotype.”

In microgravity, researchers anticipate the cancer cells will form three-dimensional multicellular tumor spheroids. This behavior was identified in the previous study, where cells floated without mixing with each other in the microgravity environment. This finding revealed that biochemical components on the cell surfaces were responsible for the initial cell-to-cell interactions required for spheroid formation.

For the Cellbox-Thyroid study, researchers used six experiment containers that fit into the NanoRacks platform and centrifuge for the test runs. After the experiments completed, the samples were stored for return to Earth. Once back on the ground, researchers will analyze the samples and compare them to data from ground controls using simulated microgravity via a random positioning machine and the results from the SIMBOX study.

The hope is that the continuance of this research from the original SIMBOX mission to the space station study will confirm findings and build the statistical data. Grimm plans an additional follow up study, called Spheroids, for 2015. Spheroids will operate for two weeks while in orbit, providing data that—together with its predecessors—may one day take a chunk out of those annual thyroid cancer statistics.

Center for the Advancement of Science in Space (CASIS): http://www.iss-casis.org/