The Large Hadron Collider (LHC), the largest and most powerful particle accelerator in the world, has started to get ready for its second three-year run. Cool down of the vast machine has already begun in preparation for research to resume early in 2015 following a long technical stop to prepare the machine for running at almost double the energy of run 1. The last LHC magnet interconnection was closed on 18 June 2014 and one sector of 1/8 of the machine has already been cooled to operating temperature. The accelerator chain that supplies the LHC’s particle beams is currently starting up, with beam in the Proton Synchrotron accelerator last Wednesday for the first time since 2012.

"There is a new buzz about the laboratory and a real sense of anticipation," says CERN Director General Rolf Heuer, speaking at a press conference at the EuroScience Open Forum
External Links icon
(ESOF) meeting in Copenhagen. "Much work has been carried out on the LHC over the last 18 months or so, and it’s effectively a new machine, poised to set us on the path to new discoveries."

Over the last 16 months, the LHC has been through a major programme of maintenance and upgrading, along with the rest of CERN’s accelerator complex, some elements of which have been in operation since 1959. Some 10,000 superconducting magnet interconnections of were consolidated in order to prepare the LHC machine for running at its design energy.

"The machine is coming out of a long sleep after undergoing an important surgical operation," says Frédérick Bordry, CERN’s Director for Accelerators and Technology. "We are now going to wake it up very carefully and go through many tests before colliding beams again early next year. The objective for 2015 is to run the physics programme at 13 TeV." 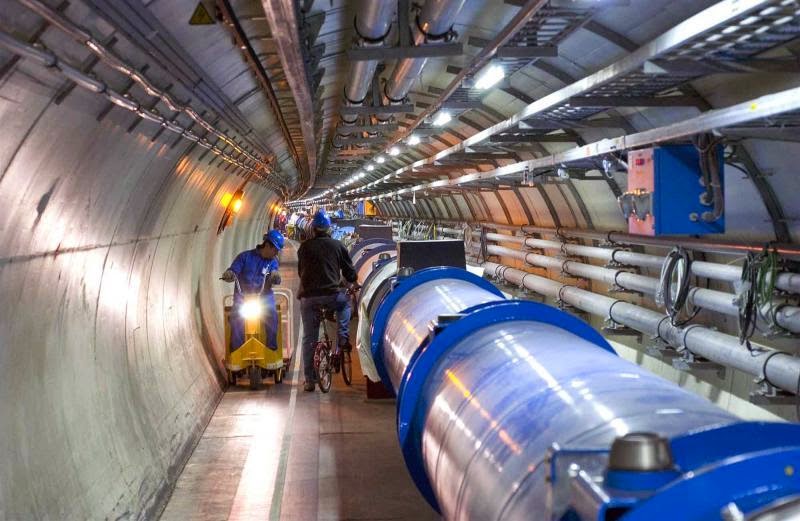 Image above: The Large Hadron Collider is being prepared for its second three-year run (Image: CERN).

The LHC experiments also took advantage of this long pause to upgrade their particle detectors. "The discovery of a Higgs boson was just the beginning of the LHC’s journey," said senior CERN physicist Fabiola Gianotti at the same press conference. "The increase in energy opens the door to a whole new discovery potential."

The Higgs boson, first mentioned in a 1964 paper by Peter Higgs, is linked to the mechanism, proposed the same year by Higgs and independently by Robert Brout and François Englert, that gives mass to fundamental particles. During its first three years, the LHC ran at a collision energy of 7 to 8 TeV delivering particle collisions to four major experiments: ATLAS, CMS, ALICE and LHCb. With the large amount of data provided by the LHC during this first period, the ATLAS and CMS experiments were able to announce the discovery of the long-sought Higgs boson on 4 July 2012, paving the way for the award of the 2013 Nobel Prize in physics to theorists François Englert and Peter Higgs.

By providing collisions at energies never reached in a particle accelerator before, the LHC will open a new window for potential discovery, allowing further studies on the Higgs boson and potentially addressing unsolved mysteries such as dark matter. The ordinary matter of which we, and everything visible in the universe is composed, makes up just 5% of what the universe is made of. The remainder is dark matter and energy, so the stakes for LHC run 2 are high.

- Mid-August     Antimatter Physics programme to restart at the Antiproton Decelerator

- Mid-October     Physics programme to restart at the SPS

- Spring 2015     Physics programme to restart at the LHC experiments