Less than a week before Rosetta's rendezvous with comet 67P/Churyumov-Gerasimenko, images obtained by OSIRIS, the spacecraft's onboard scientific imaging system, show clear signs of a coma surrounding the comet's nucleus.

A new image from July 25, 2014, clearly reveals an extended coma shrouding 67P's nucleus. "Our coma images cover an area of 150 by 150 square kilometers (90 by 90 square miles)," said Luisa Lara from the Institute of Astrophysics in Andalusia, Spain. Most likely these images show only the inner part of the coma, where particle densities are highest. Scientist expect that 67P's full coma actually reaches much farther. 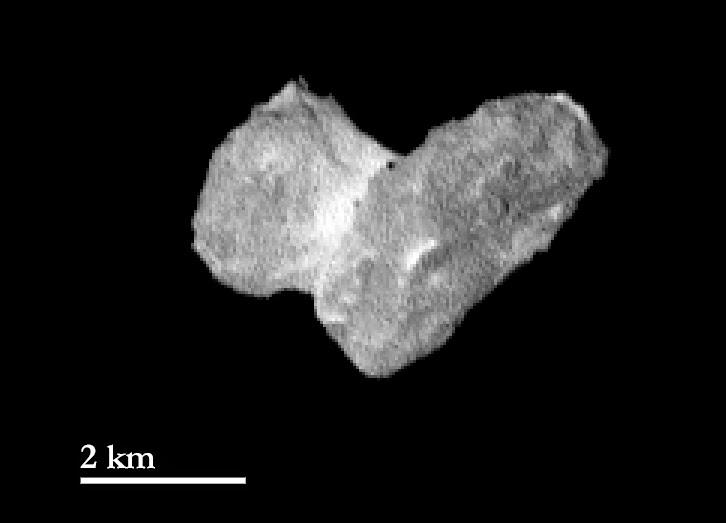 Image above: The nucleus of comet 67P/Churyumov-Gerasimernko as seen by Rosetta's OSIRIS instrument from a distance of 1,210 miles (1,950 kilometers) on July 29, 2014. Image Credit: ESA/Rosetta/MPS for OSIRIS Team MPS/UPD/LAM/IAA/SSO/INTA/UPM.

In the current image, the hazy, bright, circular structure to the right of the comet's nucleus is an artifact of the OSIRIS optical system. The center of the image located around the position of the nucleus is overexposed here.

Other new images of the comet's nucleus confirm the collar-like appearance of the neck region, which appears brighter than most parts of the comet's body and head. Possible explanations range from differences in material or grain size to topological effects. 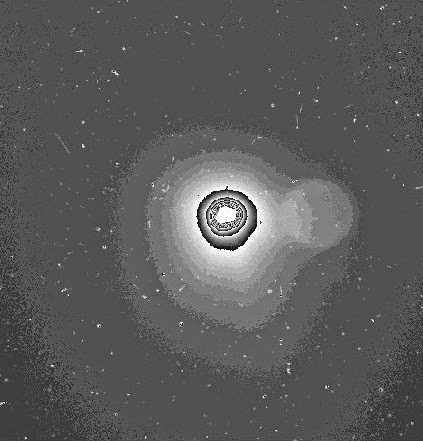 Image above: This Rosetta OSIRIS image of the coma of comet 67P/Churyumov-Gerasimenko was taken on July 25, 2014. It covers an area about 90 miles (150 kilometers) across. Image Credit: ESA/Rosetta/MPS for OSIRIS Team MPS/UPD/LAM/IAA/SSO/INTA/UPM.

Rosetta is a European Space Agency mission with contributions from its member states and NASA.

The scientific imaging system, OSIRIS, was built by a consortium led by the Max Planck Institute for Solar System Research (Germany) in collaboration with Center of Studies and Activities for Space, University of Padua (Italy), the Astrophysical Laboratory of Marseille (France), the Institute of Astrophysics of Andalusia, CSIC (Spain), the Scientific Support Office of the European Space Agency (Netherlands), the National Institute for Aerospace Technology (Spain), the Technical University of Madrid (Spain), the Department of Physics and Astronomy of Uppsala University (Sweden) and the Institute of Computer and Network Engineering of the TU Braunschweig (Germany). OSIRIS was financially supported by the national funding agencies of Germany (DLR), France (CNES), Italy (ASI), Spain, and Sweden and the ESA Technical Directorate.

Rosetta's Philae lander is provided by a consortium led by DLR, Max Planck Institute for Solar System Research, CNES and ASI. Rosetta will be the first mission in history to rendezvous with a comet, escort it as it orbits the sun, and deploy a lander to its surface.