On April 23, NASA's Swift satellite detected the strongest, hottest, and longest-lasting sequence of stellar flares ever seen from a nearby red dwarf star. The initial blast from this record-setting series of explosions was as much as 10,000 times more powerful than the largest solar flare ever recorded.

"We used to think major flaring episodes from red dwarfs lasted no more than a day, but Swift detected at least seven powerful eruptions over a period of about two weeks," said Stephen Drake, an astrophysicist at NASA's Goddard Space Flight Center in Greenbelt, Maryland, who gave a presentation on the "superflare" at the August meeting of the American Astronomical Society’s High Energy Astrophysics Division. "This was a very complex event."

At its peak, the flare reached temperatures of 360 million degrees Fahrenheit (200 million Celsius), more than 12 times hotter than the center of the sun.

The "superflare" came from one of the stars in a close binary system known as DG Canum Venaticorum, or DG CVn for short, located about 60 light-years away. Both stars are dim red dwarfs with masses and sizes about one-third of our sun's. They orbit each other at about three times Earth's average distance from the sun, which is too close for Swift to determine which star erupted.

"This system is poorly studied because it wasn't on our watch list of stars capable of producing large flares," said Rachel Osten, an astronomer at the Space Telescope Science Institute in Baltimore and a deputy project scientist for NASA's James Webb Space Telescope, now under construction. "We had no idea DG CVn had this in it."

Most of the stars lying within about 100 light-years of the solar system are, like the sun, middle-aged. But a thousand or so young red dwarfs born elsewhere drift through this region, and these stars give astronomers their best opportunity for detailed study of the high-energy activity that typically accompanies stellar youth. Astronomers estimate DG CVn was born about 30 million years ago, which makes it less than 0.7 percent the age of the solar system. 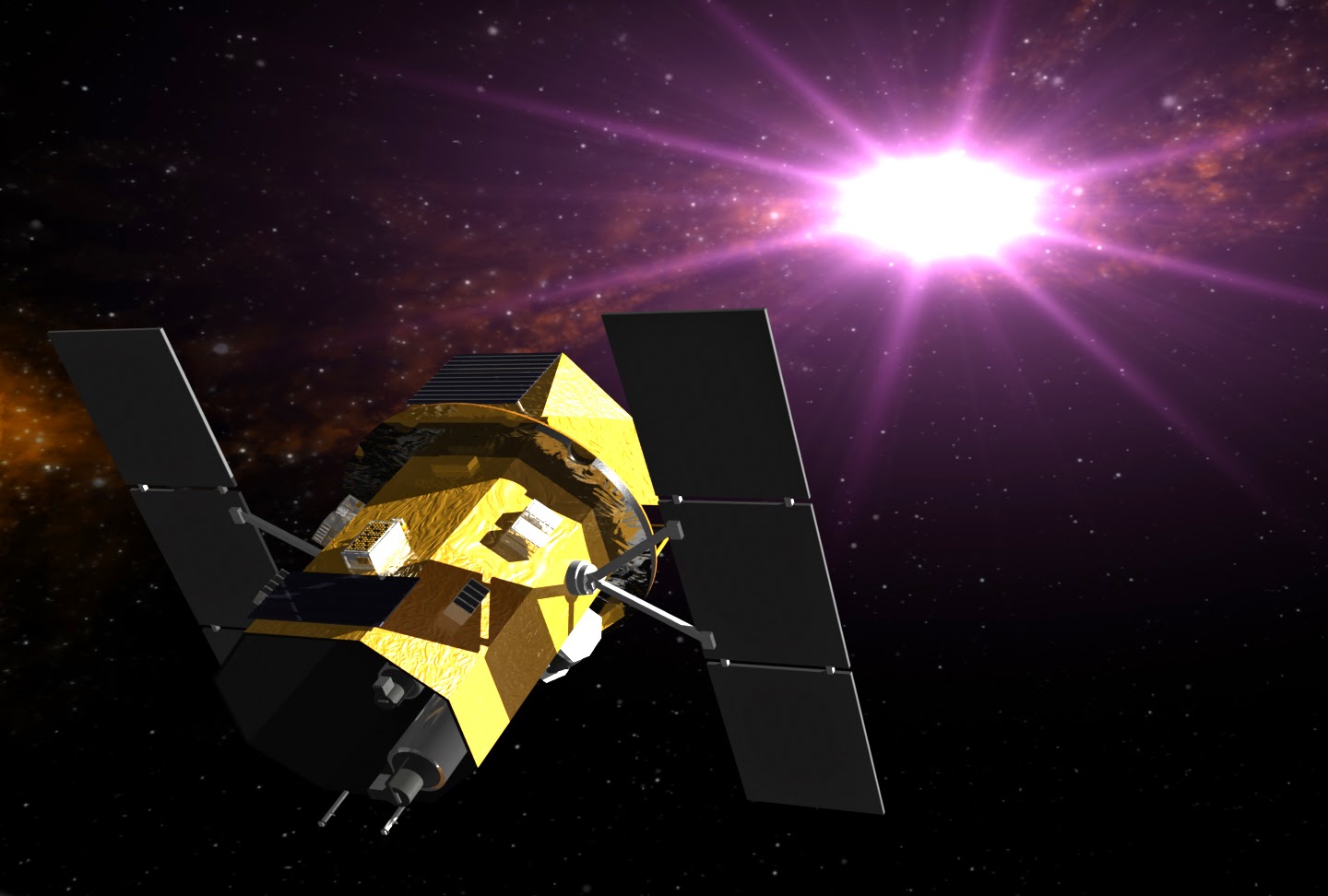 Stars erupt with flares for the same reason the sun does. Around active regions of the star's atmosphere, magnetic fields become twisted and distorted. Much like winding up a rubber band, these allow the fields to accumulate energy. Eventually a process called magnetic reconnection destabilizes the fields, resulting in the explosive release of the stored energy we see as a flare. The outburst emits radiation across the electromagnetic spectrum, from radio waves to visible, ultraviolet and X-ray light.

At 5:07 p.m. EDT on April 23, the rising tide of X-rays from DG CVn's superflare triggered Swift's Burst Alert Telescope (BAT). Within several seconds of detecting a strong burst of radiation, the BAT calculates an initial position, decides whether the activity merits investigation by other instruments and, if so, sends the position to the spacecraft. In this case, Swift turned to observe the source in greater detail, and, at the same time, notified astronomers around the globe that a powerful outburst was in progress.

"For about three minutes after the BAT trigger, the superflare's X-ray brightness was greater than the combined luminosity of both stars at all wavelengths under normal conditions," noted Goddard's Adam Kowalski, who is leading a detailed study on the event. "Flares this large from red dwarfs are exceedingly rare."

The star's brightness in visible and ultraviolet light, measured both by ground-based observatories and Swift's Optical/Ultraviolet Telescope, rose by 10 and 100 times, respectively. The initial flare's X-ray output, as measured by Swift's X-Ray Telescope, puts even the most intense solar activity recorded to shame. Image above: DG CVn, a binary consisting of two red dwarf stars shown here in an artist's rendering, unleashed a series of powerful flares seen by NASA's Swift. At its peak, the initial flare was brighter in X-rays than the combined light from both stars at all wavelengths under typical conditions.
Image Credit: NASA's Goddard Space Flight Center/S. Wiessinger.

The largest solar explosions are classified as extraordinary, or X class, solar flares based on their X-ray emission. "The biggest flare we've ever seen from the sun occurred in November 2003 and is rated as X 45," explained Drake. "The flare on DG CVn, if viewed from a planet the same distance as Earth is from the sun, would have been roughly 10,000 times greater than this, with a rating of about X 100,000."

But it wasn't over yet. Three hours after the initial outburst, with X-rays on the downswing, the system exploded with another flare nearly as intense as the first. These first two explosions may be an example of "sympathetic" flaring often seen on the sun, where an outburst in one active region triggers a blast in another.

Over the next 11 days, Swift detected a series of successively weaker blasts. Osten compares the dwindling series of flares to the cascade of aftershocks following a major earthquake. All told, the star took a total of 20 days to settle back to its normal level of X-ray emission.

How can a star just a third the size of the sun produce such a giant eruption? The key factor is its rapid spin, a crucial ingredient for amplifying magnetic fields. The flaring star in DG CVn rotates in under a day, about 30 or more times faster than our sun. The sun also rotated much faster in its youth and may well have produced superflares of its own, but, fortunately for us, it no longer appears capable of doing so.

Astronomers are now analyzing data from the DG CVn flares to better understand the event in particular and young stars in general. They suspect the system likely unleashes numerous smaller but more frequent flares and plan to keep tabs on its future eruptions with the help of NASA's Swift.

Swift Detection of a Superflare from DG CVn: http://www.astronomerstelegram.org/?read=6121