Expedition 41 Commander Max Suraev and Flight Engineers Reid Wiseman and Alexander Gerst focused on eye exams and scientific research aboard the International Space Station Thursday while continuing preparations for the arrival of the other half of their crew next week.

Suraev, Wiseman and Gerst, who have been aboard the station since May 28, began the day after their usual 2 a.m. EDT wakeup with an inspection of the orbiting laboratory, followed by a daily planning conference with the flight control teams around the world. 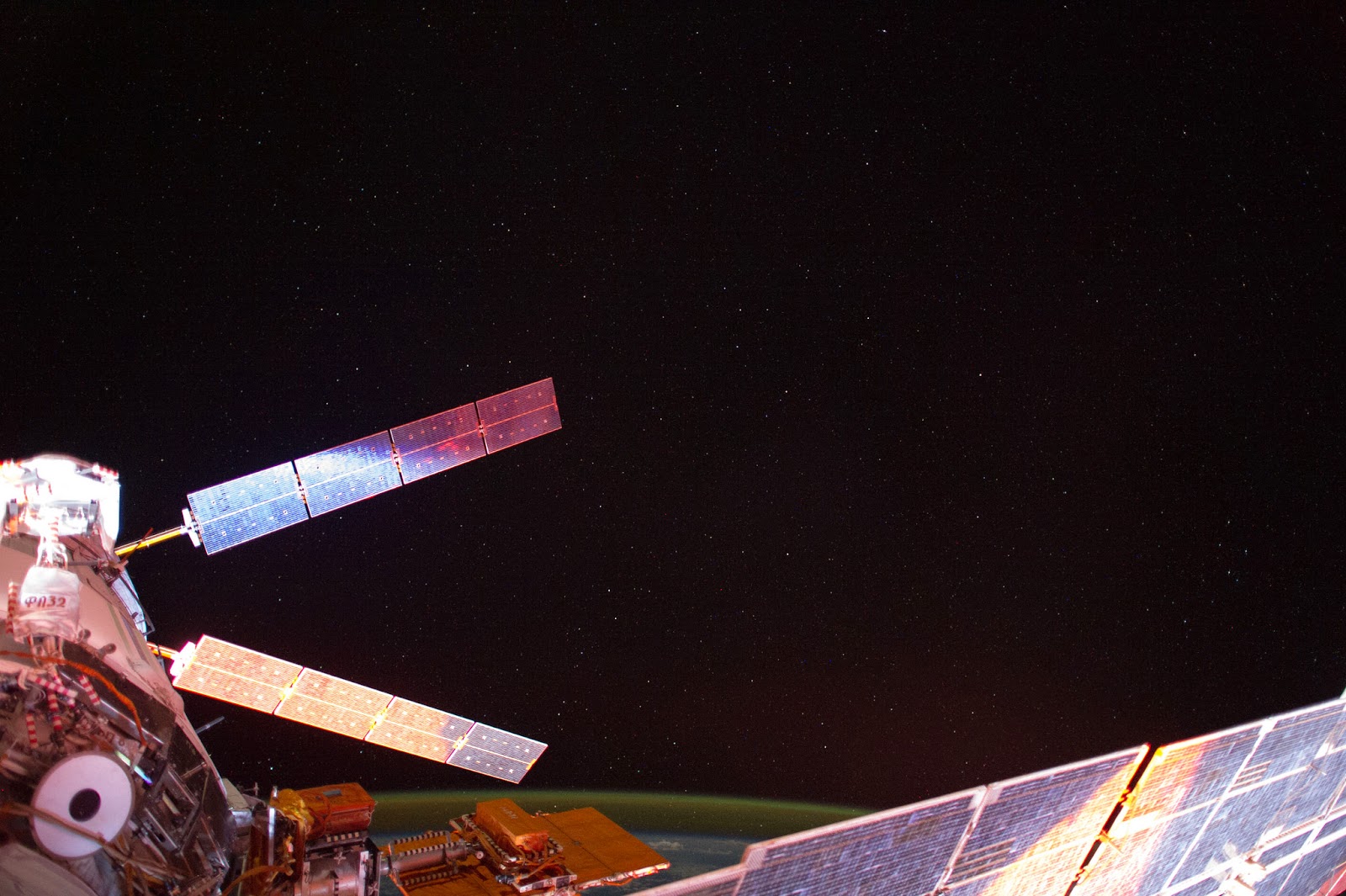 Image above: Photographed with a mounted automated camera, this is one of a number of images featuring the European Space Agency's fifth Automated Transfer Vehicle docked with the International Space Station. Image Credit: NASA.

Wiseman spent much of his morning preparing the Combustion Integrated Rack for another series of ground-commanded experiment sessions with the Flame Extinguishment Experiment-2, or FLEX-2. This experiment looks at how spherical droplets of fuels burn and extinguish in microgravity, with an eye toward the production of safer spacecraft and increased fuel efficiency for liquid-fuel engines here on Earth.  The NASA astronaut temporarily removed the Multi-user Droplet Combustion Apparatus, or MDCA, from the rack and restrained it to the Maintenance Work Area so he could replace two fuel reservoirs. Wiseman also replaced two windows inside the rack before reinstalling the MDCA.

Gerst meanwhile swapped out a recycle tank inside the Water Recovery System of the station’s regenerative Environmental Control and Life Support System. The European Space Agency astronaut later performed a manual fill of the flush water tank of the Waste and Hygiene Compartment to prevent any damage to the toilet in the station’s Tranquility node.

Wiseman then joined Gerst to assist him with more eye exams for the Ocular Health study as flight surgeons keep a close watch on any changes to the crew’s eyesight. NASA recently identified that some astronauts experience changes in their vision, which might be related to the effects of microgravity on the cardiovascular system as the body’s fluids tend to move toward the upper body and head and cause the pressure in the skull to rise. With guidance from the Ocular Health team on the ground, Wiseman used optical coherence tomography equipment to examine his German crewmate’s eyes.  Later, Wiseman collected detailed imagery of the interior of Gerst’s eyes with a fundoscope. 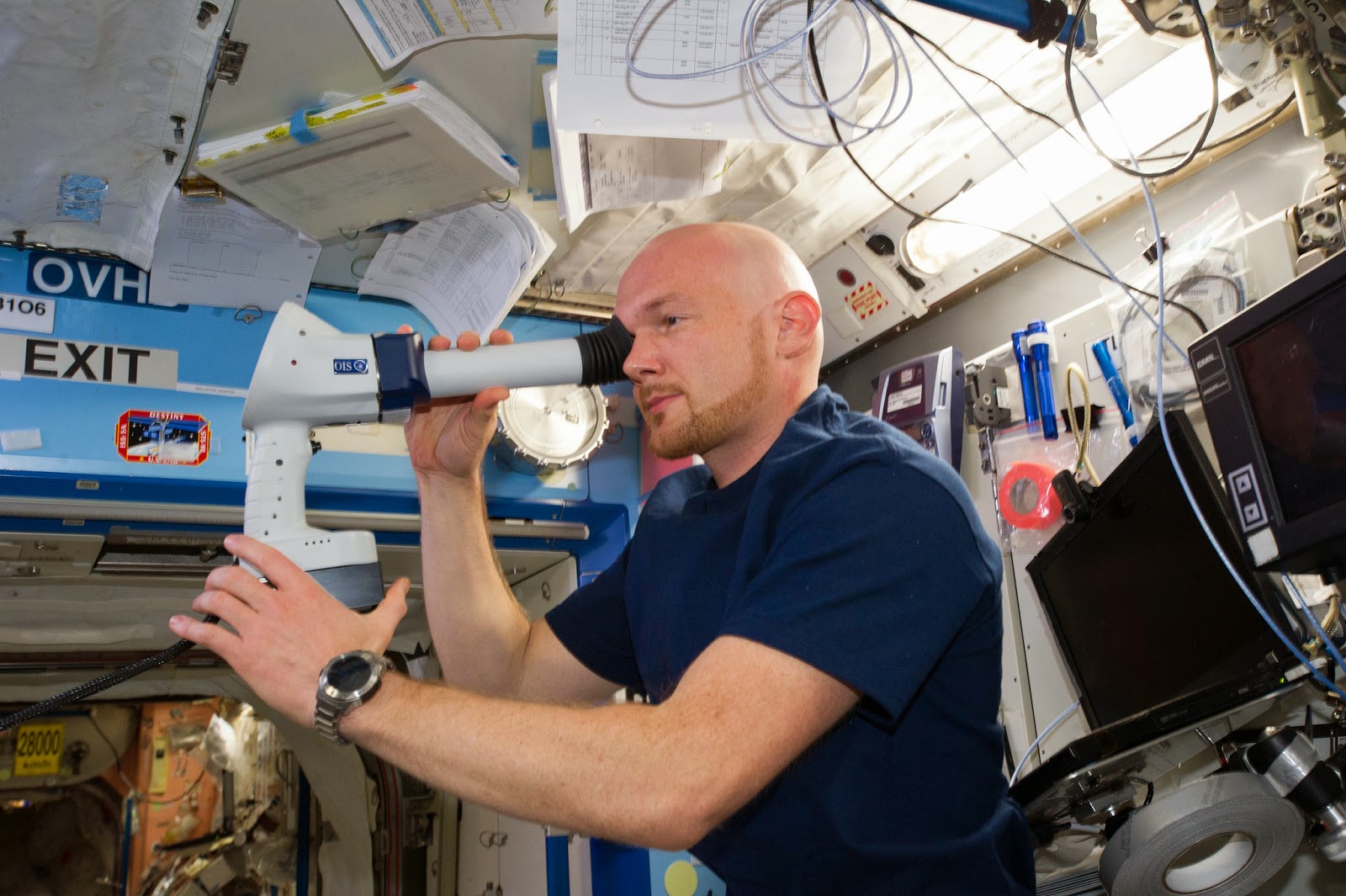 Wiseman took a brief break from his afternoon activities to talk with NBC Nightly News about life and work aboard the station and his participation in social media.

On the Russian side of the station, Suraev installed new software on a laptop computer before moving on to replace hoses and hardware in in the Zvezda service module’s bathroom.

After a break for lunch, Suraev connected and secured cables for a TV camera and conducted a streaming video test in preparation for next week’s arrival of three additional station crew members. NASA astronaut Barry Wilmore, Soyuz Commander Alexander Samokutyaev and Flight Engineer Elena Serova will launch aboard their Soyuz TMA-14M spacecraft from the Baikonur Cosmodrome in Kazakhstan on Sept. 25 at 4:25 p.m. (Sept. 26 at 2:25 a.m., Kazakh time) to begin a six-hour, four-orbit trek to the orbiting complex. Once the Soyuz is docked to the Poisk Mini-Research Module-2 and the hatches are opened, Wilmore, Samokutyaev and Serova will begin a 5 ½-month stay aboard the station. Wilmore will become commander of Expedition 42 when Suraev, Wiseman and Gerst depart in November. 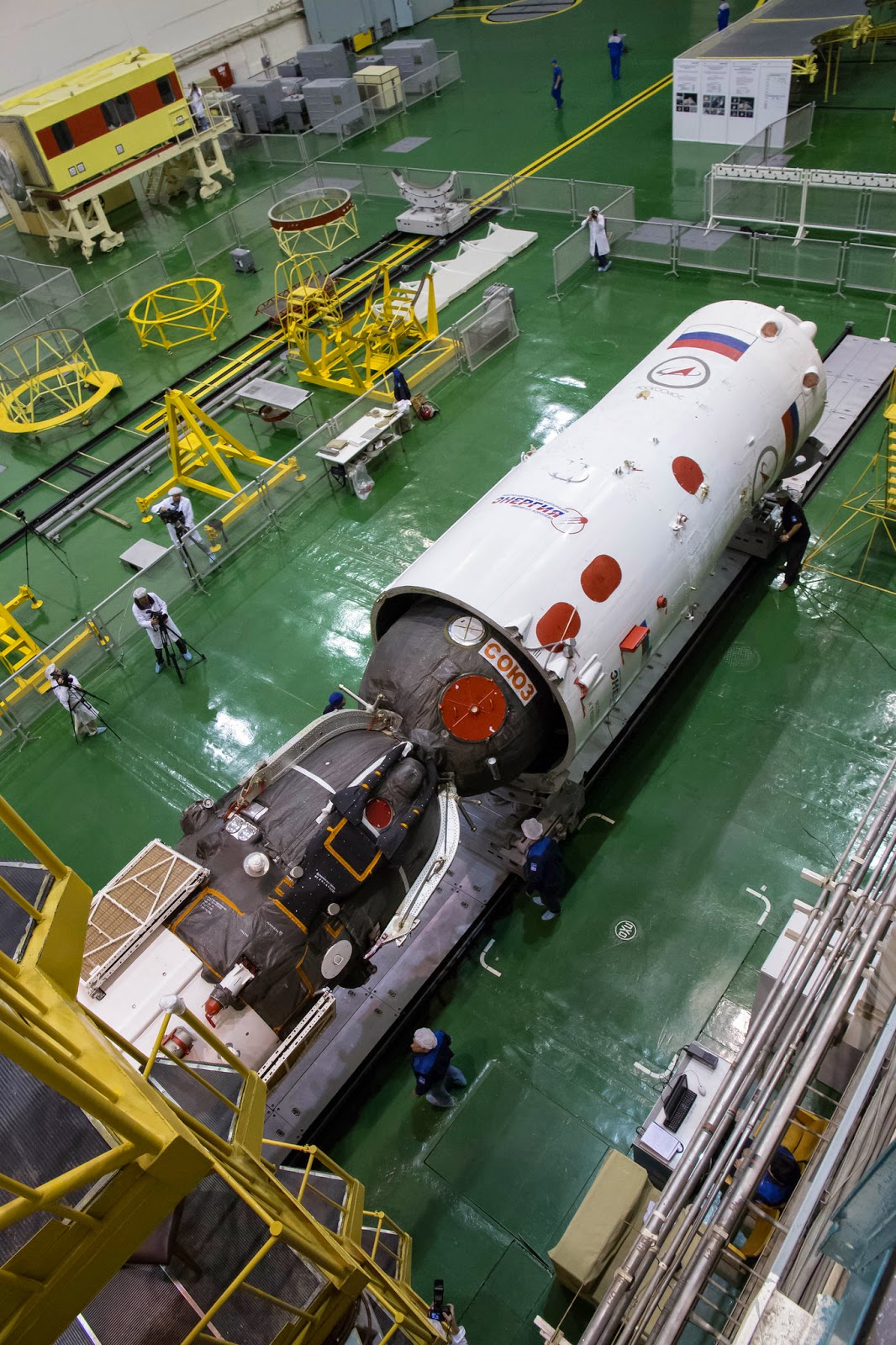 Image above: At the Integration Facility at the Baikonur Cosmodrome in Kazakhstan, the Soyuz TMA-14M spacecraft is encapsulated in the upper stage of the Soyuz booster rocket Sept. 18 that will propel it into orbit. Image Credit: NASA/Victor Zelentsov.

Meanwhile at the Cape Canaveral Air Force Station in Florida, preparations continue for the launch of the fourth SpaceX commercial resupply services mission on Saturday at 2:14 a.m. The SpaceX Dragon cargo vehicle will deliver 2.5 tons for supplies and science to the orbiting laboratory, including critical materials to support 255 science and research investigations that will occur during the Expeditions 41 and 42. NASA Television coverage of the launch begins at 1 a.m. Saturday. As of Thursday afternoon, the probability of favorable weather for Saturday’s launch has decreased to 50%. If the launch is postponed, the next launch opportunity is Sunday.

If Dragon launches Saturday, Gerst and Wiseman will use the 57-foot Canadarm2 robotic arm to capture Dragon around 7:30 a.m. Monday for its berthing to the Earth-facing port of the Harmony node. NASA TV coverage of the grapple will begin at 5:30 a.m. Coverage will resume at 9:30 a.m. for the installation of Dragon to Harmony.