Wiseman, the lead spacewalker for Wednesday’s excursion, and Wilmore switched their suits to battery power at 8:16 a.m. EDT, signaling the start of the spacewalk. 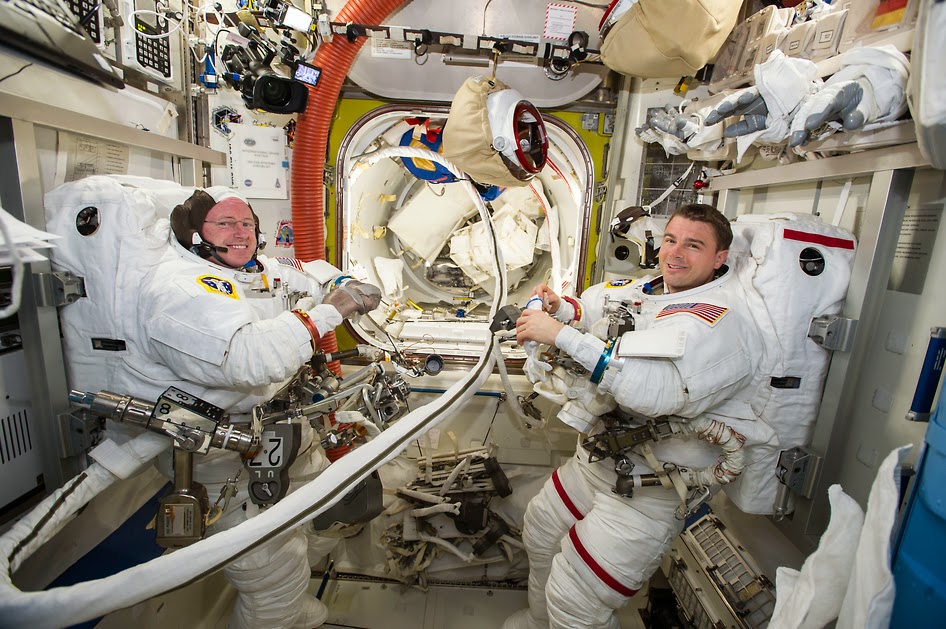 For the highest priority task of the spacewalk, Wiseman and Wilmore exited from the Quest airlock and translated out to the starboard side of the station’s integrated truss structure. There they replaced a failed power regulator known as a sequential shunt unit, which failed in May. The unit regulates power from the 3A solar array. The station has since operated normally on seven of its eight power channels, but replacing the unit provides the station team with more flexibility and redundancy in managing the primary power system and assures enough power for all the planned science. 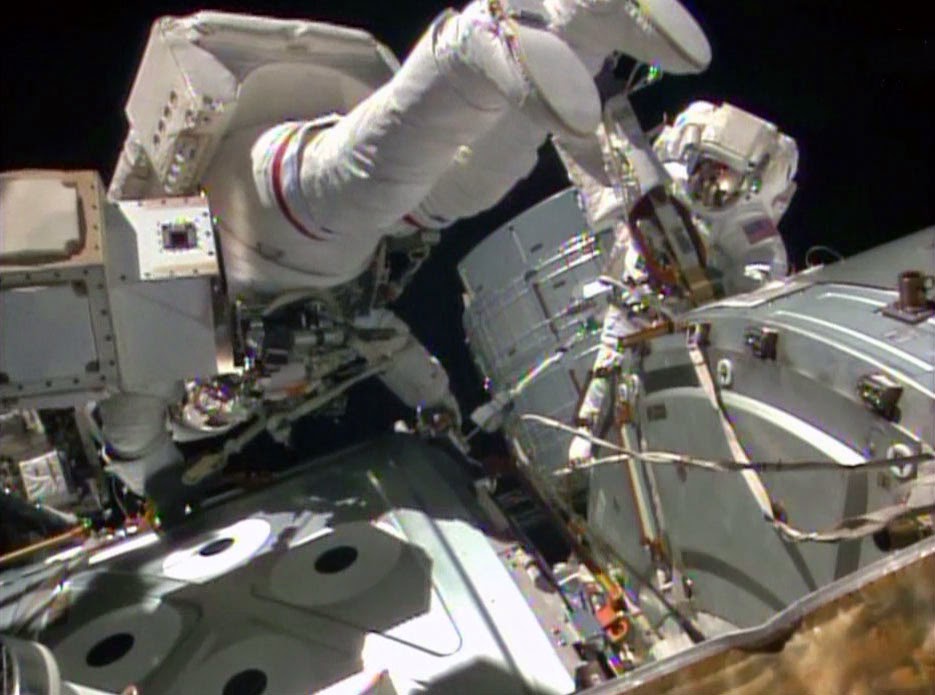 Timing was a factor for the replacement of the sequential shunt unit. The spacewalkers needed to remove the failed suitcase-sized unit and install its replacement while the station passed through the Earth’s shadow and electricity was not being generated by the solar array.

The remainder of the spacewalk focused on moving equipment installed on the port side of the station’s truss in preparation for the relocation of the Leonardo Permanent Multipurpose Module, or PMM, currently expected to take place next summer. The relocation of the PMM and the installation of international docking adapters scheduled to be delivered to the complex in 2015 will configure the station for future commercial crew vehicles and provide an additional berthing port for commercial cargo spacecraft. 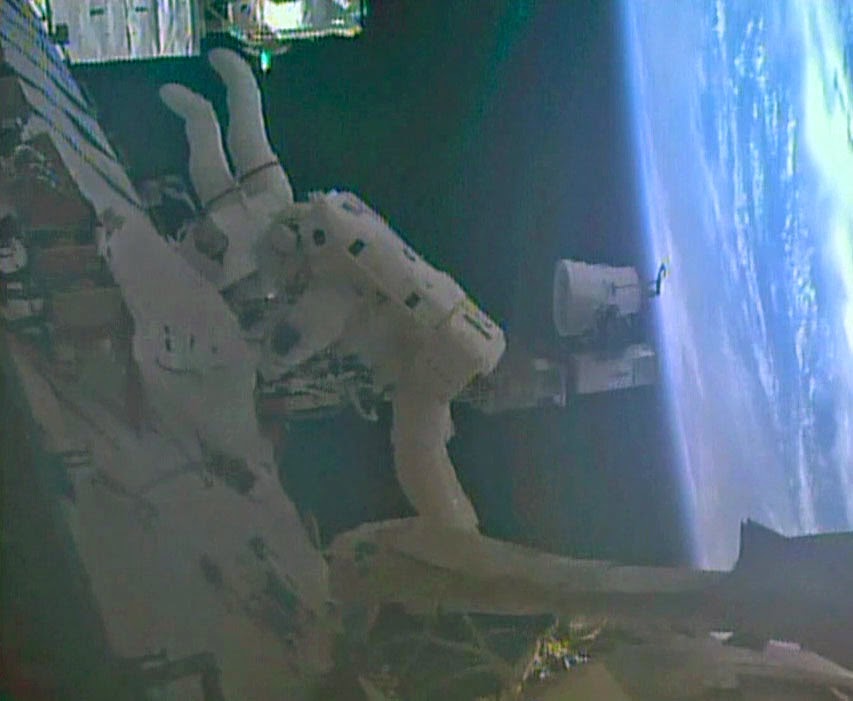 Image above: Flight Engineers Barry Wilmore (foreground) and Reid Wiseman get set to perform their next set of tasks during Wednesday's spacewalk outside the International Space Station. Image Credit: NASA TV.

Wiseman and Wilmore removed an external TV camera from the bottom of the P1 truss segment. Since that camera had lost its zoom capability, the spacewalkers replaced it on the top of P1 with a new camera.

The astronauts then detached an articulating portable foot restraint and tool stanchion from P1 and moved it inward to the centerpiece of the station’s truss structure, the S0 truss, to get it out of the way for the relocation of Leonardo. 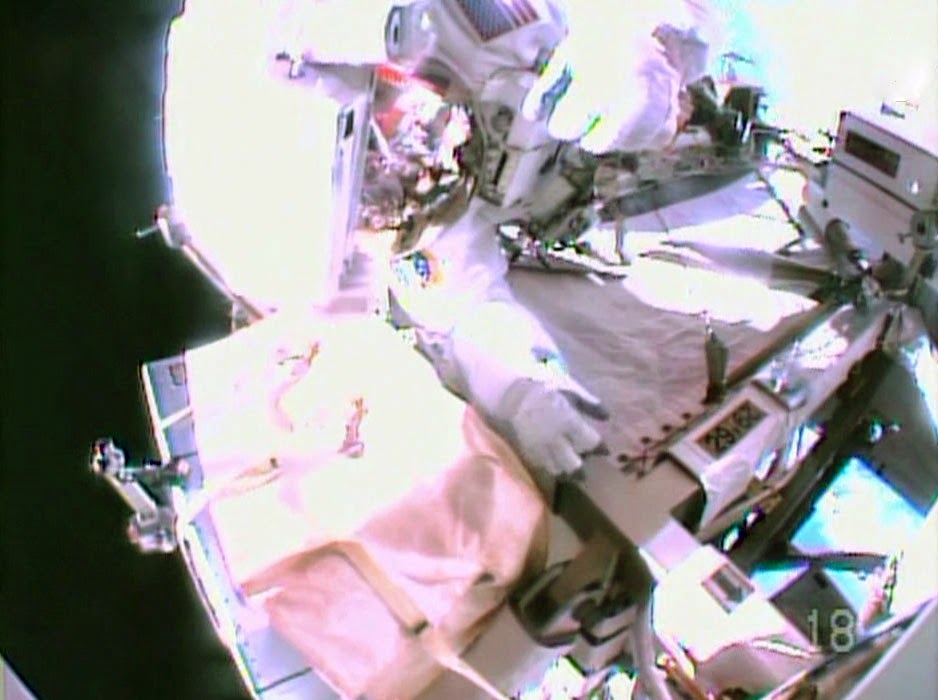 Finally, the Wireless Video System External Transceiver Assembly, or WETA, which receives all the video signals from spacewalking crew members, was transferred from the P1 truss to the top of the Harmony node.

Wednesday’s spacewalk was the 183rd  in support of station assembly and maintenance.  This was the first spacewalk for Wilmore. Wiseman, who joined Flight Engineer Alexander Gerst of the European Space Agency for a 6-hour, 13-minute spacewalk on Oct. 7, completed his second spacewalk.