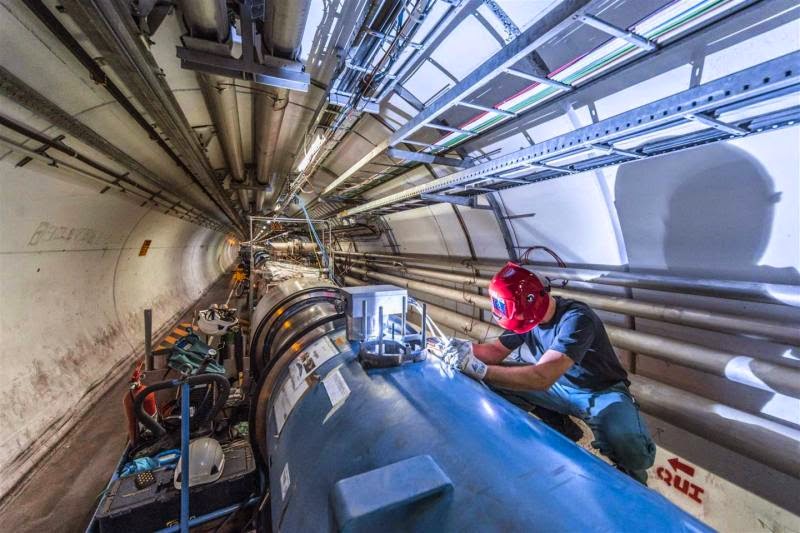 Image above: A welder at work consolidating interconnections between dipole magnets on the Large Hadron Collider (Image: CERN).

It's almost two years to the day since the team in the CERN Control Centre switched off the beams in the Large Hadron Collider (LHC) at 7.24am on 14 February 2013, marking the end of the accelerator's first three-year run. Hundreds of engineers and technicians have been repairing and strengthening the laboratory's accelerators and experiments in preparation for running the LHC at the higher energy. So what has the work achieved? 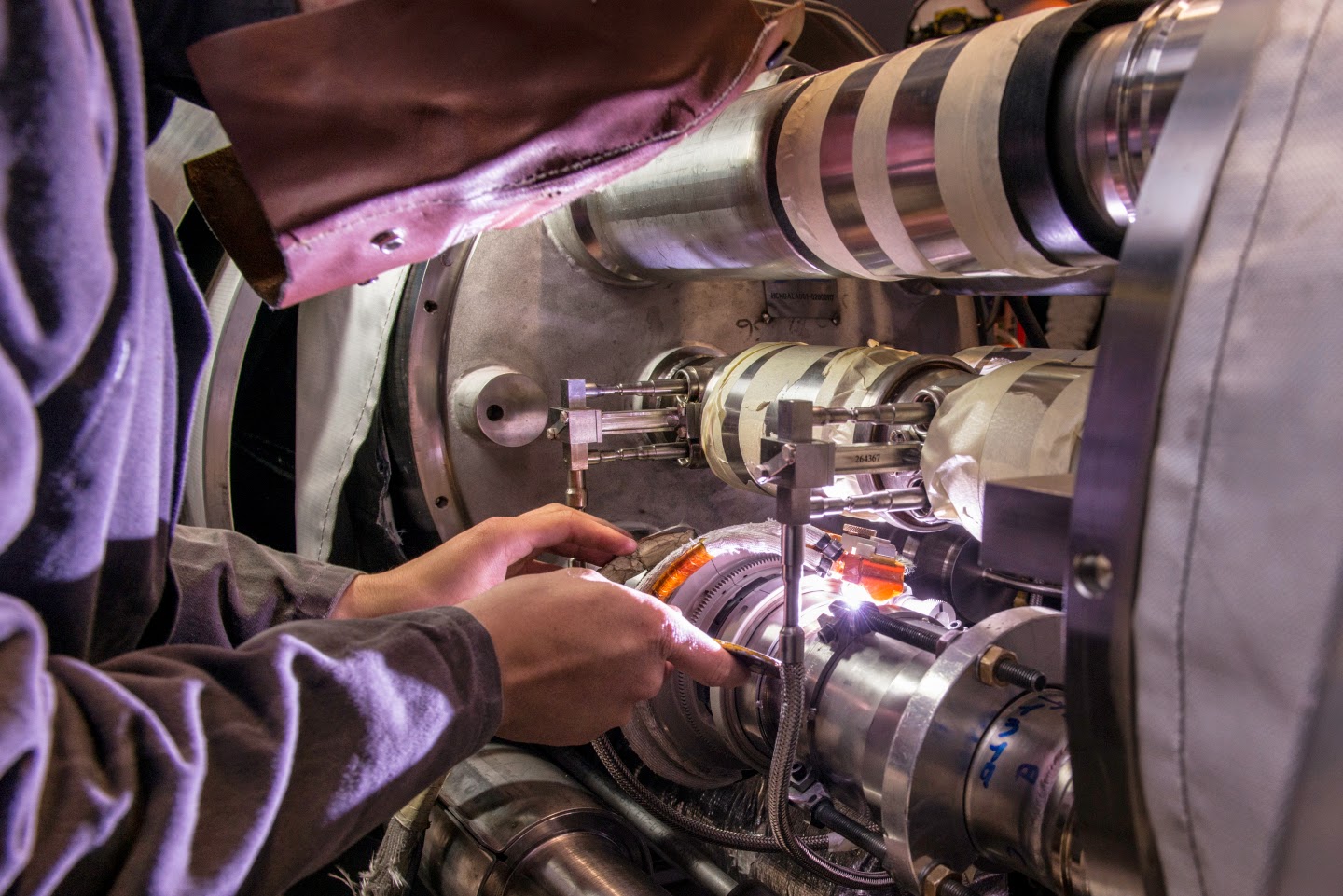 Image above: A welder uses a custom-made orbital welding tool to seal an interconnection between dipole magnets on the LHC (Image: Maximilien Brice/CERN).

When the LHC restarts this year, the energy of particle collisions will be 13 TeV (or 6.5 TeV per beam) compared to 8 TeV (4 TeV per beam) in 2012. This higher energy will allow physicists to extend their searches for new particles and to check previously untestable theories.

To prepare the machine for this new energy frontier, 18 of the LHC’s 1232 superconducting dipole magnets, which steer particle beams around the accelerator, were replaced due to wear and tear. More than 10,000 electrical interconnections between dipole magnets were fitted with shunts – pieces of metal that act as an alternative path for the 11,000 amp current, saving the interconnection if there is a fault. The machine will operate at a higher voltage to run the higher energy beams, and has been fitted with new sets of radiation-resistant electronics. The vacuum system that keeps the beam pipe clear of stray molecules has been upgraded, and the cryogenics system for the LHC's superconducting dipole magnets has been refurbished. 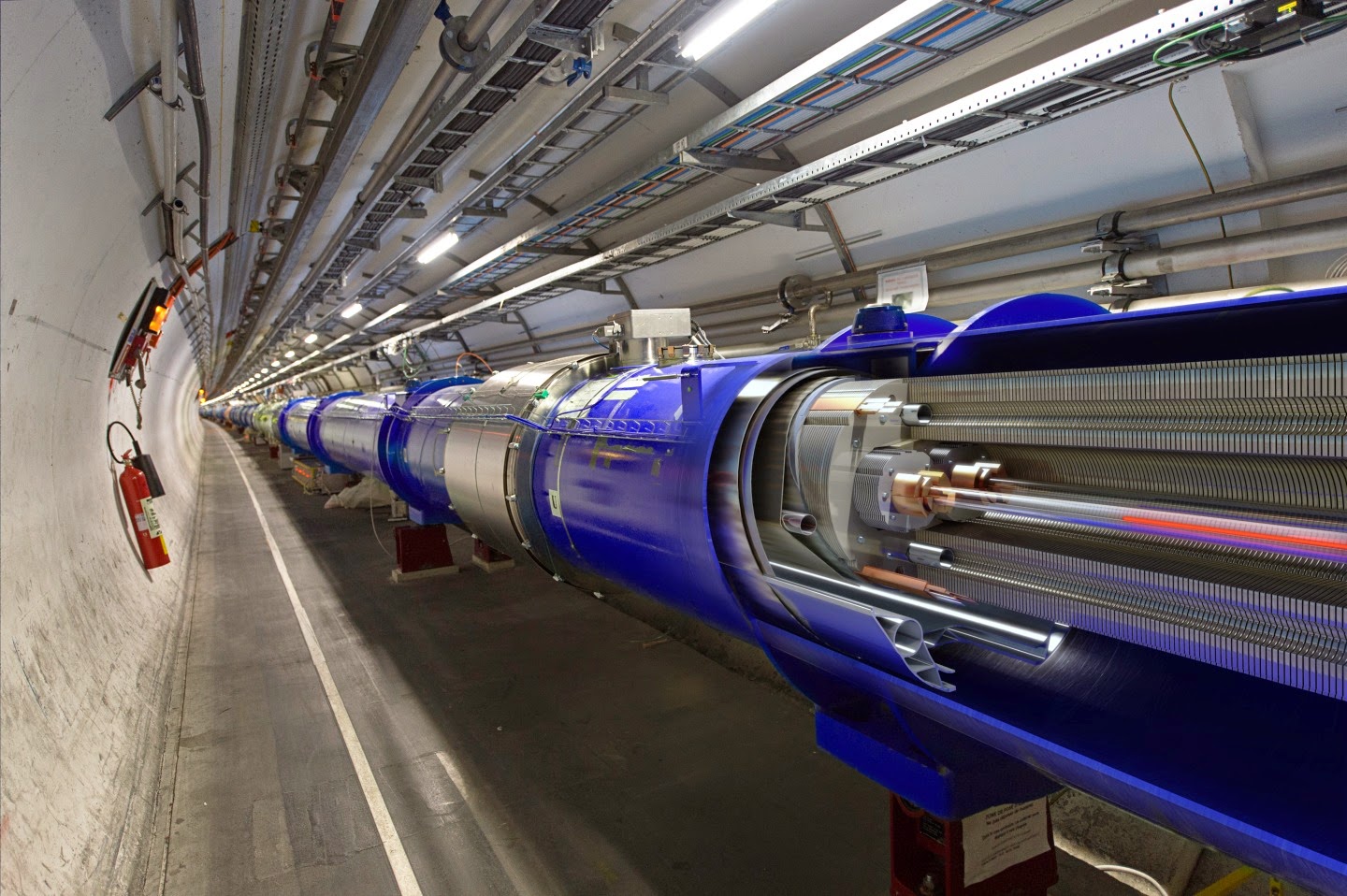 Image above: A 3D artist has dissected the LHC in this composite image, showing a cut-out section of a superconducting dipole magnet. The beam pipes are represented as clear tubes, with counter-rotating proton beams shown in red and blue (Image: Daniel Dominguez/CERN).

Bunches of protons in the accelerator will be separated in time by 25 nanoseconds compared to 50 nanoseconds. The LHC will thus deliver more particles per unit time, as well as more collisions, to the experiments. To prepare for the challenges of more collisions, the LHC experiments, including ALICE, ATLAS, CMS and LHCb, underwent full consolidation and maintenance programmes, including upgrades to their subdetectors and data-acquisition systems.

The CERN IT department purchased and installed almost 60,000 new cores and over 100 petabytes of additional disk storage to cope with the increased amount of data that is expected from the experiments during run 2. Significant upgrades have also been made to the networking infrastructure, including the installation of new uninterruptible power supplies.

When the LHC starts up again this spring, CERN's accelerators and experiments will be ready.

For more about the LHC and its restart at higher energy, check out these infographics: