The sea ice cap of the Arctic appeared to reach its annual maximum winter extent on Feb. 25, according to data from the NASA-supported National Snow and Ice Data Center (NSIDC) at the University of Colorado, Boulder. At 5.61 million square miles (14.54 million square kilometers), this year’s maximum extent was the smallest on the satellite record and also one of the earliest. 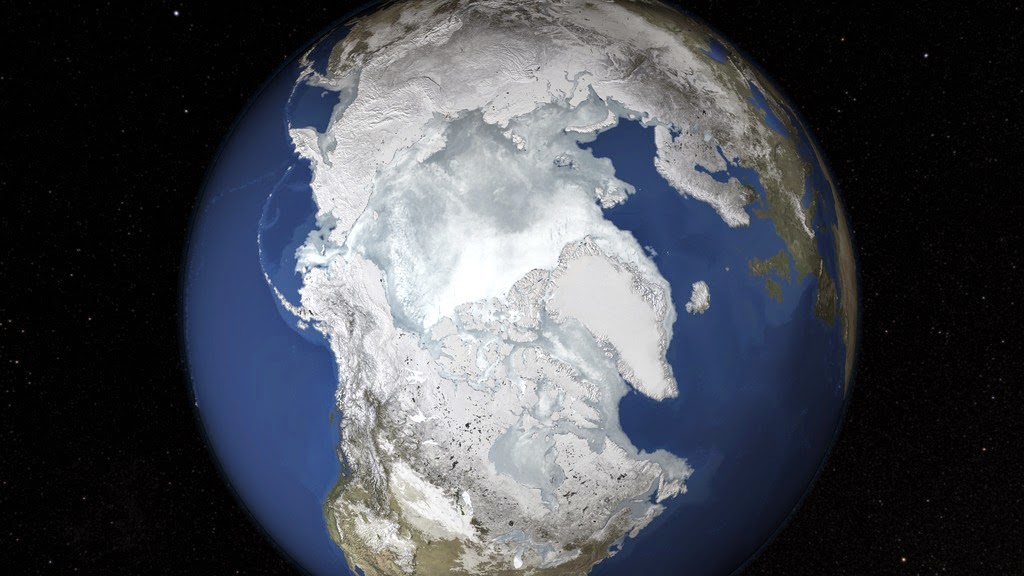 Image above: Arctic sea ice likely reached its annual maximum winter extent on Feb. 25, barring a late season surge. At 5.61 million square miles (14.54 million square kilometers), this year's winter peak extent is the lowest and one of the earliest on the satellite record that began in 1979. Image Credit: NASA's Goddard Space Flight Center.

Arctic sea ice, frozen seawater floating on top of the Arctic Ocean and its neighboring seas, is in constant change: it grows in the fall and winter, reaching its annual maximum between late February and early April, and then it shrinks in the spring and summer until it hits its annual minimum extent in September. The past decades have seen a downward trend in Arctic sea ice extent during both the growing and melting season, though the decline is steeper in the latter.

This year’s maximum was reached 15 days earlier than the 1981 to 2010 average date of March 12, according to NSIDC. Only in 1996 did it occur earlier, on Feb. 24. However, the sun is just beginning to rise on the Arctic Ocean and a late spurt of ice growth is still possible, though unlikely.

“The winter maximum gives you a head start, but the minimum is so much more dependent on what happens in the summer that it seems to wash out anything that happens in the winter,” said Walt Meier, a sea ice scientist at NASA’s Goddard Space Flight Center in Greenbelt, Maryland. “If the summer is cool, the melt rate will slow down. And the opposite is true, too: even if you start from a fairly high point, warm summer conditions make ice melt fast. This was highlighted by 2012, when we had one of the later maximums on record and extent was near-normal early in the melt season, but still the 2012 minimum was by far the lowest minimum we’ve seen.” 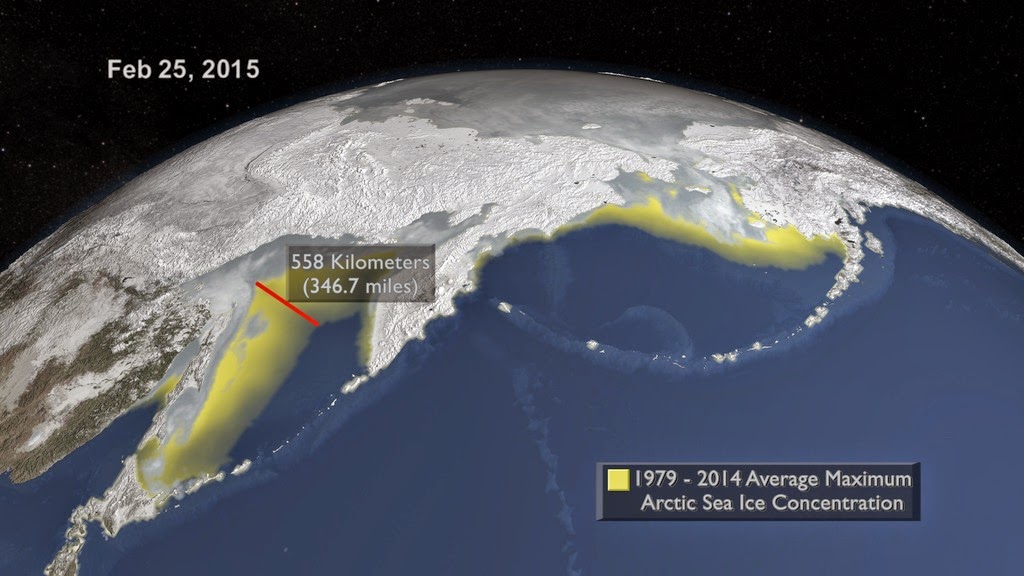 Image above: Here the 2015 maximum is compared to the 1979-2014 average maximum shown in yellow. A distance indicator shows the difference between the two in the Sea of Okhotsk north of Japan. Image Credit: NASA's Goddard Space Flight Center.

The main player in the wintertime maximum extent is the seasonal ice at the edges of the ice pack. This type of ice is thin and at the mercy of which direction the wind blows: warm winds from the south compact the ice northward and also bring heat that makes the ice melt, while cold winds from the north allow more sea ice to form and spread the ice edge southward.

“Scientifically, the yearly maximum extent is not as interesting as the minimum. It is highly influenced by weather and we’re looking at the loss of thin, seasonal ice that is going to melt anyway in the summer and won’t become part of the permanent ice cover,” Meier said. “With the summertime minimum, when the extent decreases it’s because we’re losing the thick ice component, and that is a better indicator of warming temperatures.”