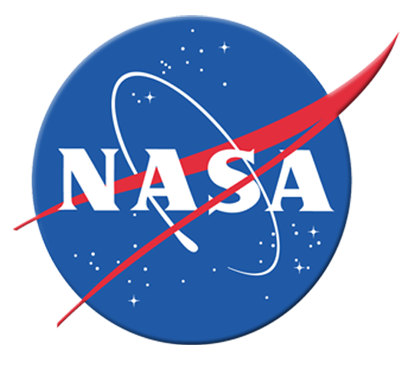 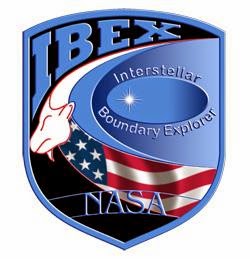 As the sun skims through the galaxy, it emits charged particles in a stream of plasma called the solar wind. The solar wind, in turn, creates a bubble known called the heliosphere that extends far beyond the planets of the solar system. For decades, scientists have visualized the heliosphere as shaped like a comet, with a very long tail extending some 464 billion miles, which is thousands of times as far as the distance from Earth to the sun. 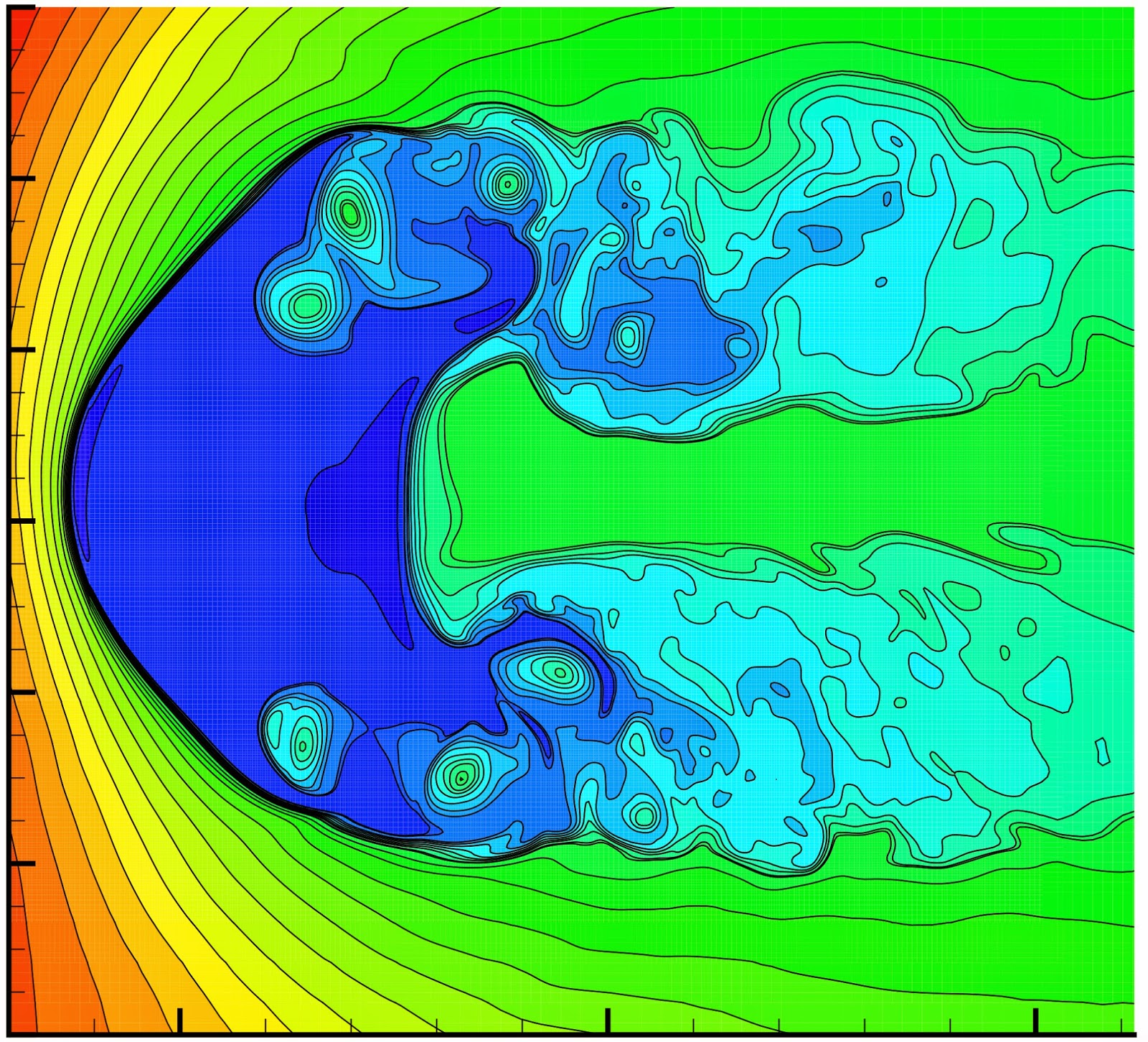 Image above: A new simulation of the heliosphere – the magnetic bubble surrounding the sun – shows it to have two relatively short jets streaming away from the nose. Image Credit: M. Opher/Reproduced by permission of the AAS.

New NASA-funded research now suggests that the heliosphere is actually dominated by two giant jets of material shooting backwards over the north and south poles of the sun, which are confined by the interaction of the sun’s magnetic field with the interstellar magnetic field. These curve around in two—relatively short – tails toward the back. The end result is a heliosphere without that long tail; a heliosphere that looks a lot more like a crescent moon than a comet. What's more, the two jets are similar to other astrophysical jets seen in space, so studying them locally could open doors to understanding such jets throughout the universe. The research is described in a paper in Astrophysical Journal Letters, which appeared online on Feb. 19, 2015.

"Everyone's assumption has been that the shape of the heliosphere was molded by the flow of interstellar material passing around it," said Merav Opher, an astronomer at Boston University, who is lead author on the paper. "Scientists thought the solar wind flowing down the tail could easily pull the magnetic fields in the heliosphere along as it flowed by, creating this long tail. But it turns out the magnetic fields are strong enough to resist that pull – so instead they squeeze the solar wind and create these two jets."

Opher and her colleagues found the jets and determined the new shape when they adjusted simulations of the heliosphere based on observations collected from NASA's Voyager 1 spacecraft, which recently moved outside of the heliosphere into interstellar space. As the first man-made object outside of our solar system, Voyager provided our only glimpse so far of the interstellar medium and it provided one giant surprise: The magnetic fields out there were aligned pretty much the same as the ones in here, though it had long been expected they would be oriented in a different direction.

Images above: Scientists think the magnetic bubble around our sun may look more like the shortened one as seen in this image of the star BZ Cam (left), as opposed to the long one as seen around the star Mira (right). Image Credit: NASA/Casalegno/GALEX.

Opher -- along with space scientist Jim Drake at the University of Maryland in College Park who is a co-author on the paper – had previously created models based on computer code developed by space physicists at the University of Michigan of the heliosphere. Their previous work focused on the nose of the heliosphere, trying to understand the physics there as we hurtle through space. To see if they could replicate the unexpected Voyager results, the team created a higher resolution simulation.

The new simulation described a heliosphere unlike one considered before.

“The Voyagers had a flashlight in the kitchen, and nobody was looking in the attic,” she remarks. “We noticed, while studying the draping of the galaxy’s magnetic field around the nose, that the heliosphere was much shorter than we anticipated."

Instead of being dominated solely by the flow of the interstellar material to create a long tail, the shape of the heliosphere is also affected by the solar wind jets emanating from the sun, said Drake.

In the presence of the interstellar flow, these jets are bowed backwards, creating a crescent shape, as seen from the side of the sun. The jets erode in the presence of the strong interstellar flow, leading to two attenuated, short tails. This leads to a much shorter heliosphere of only about 250 times the distance between Earth and the sun, or about 23 billion miles. 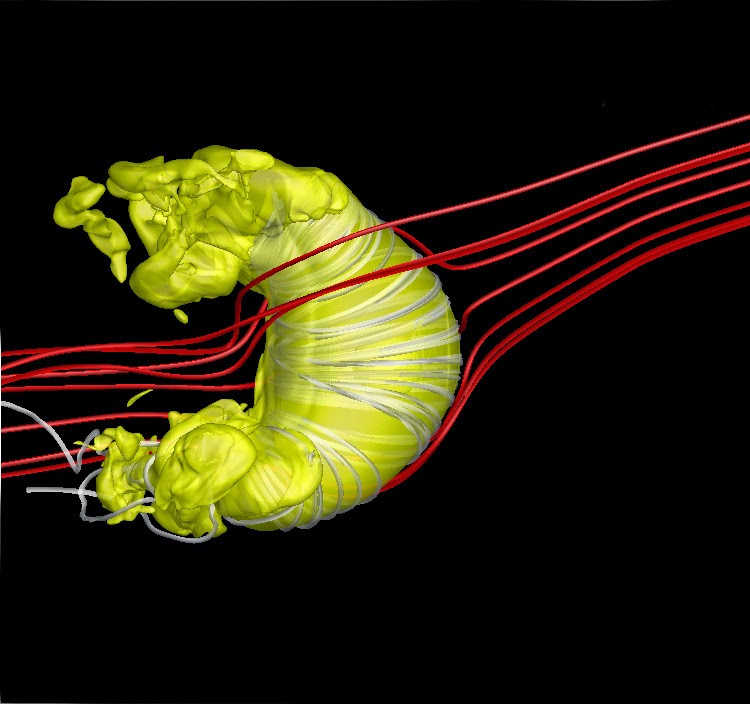 "Not only is the heliosphere's shape different from what people thought," said Drake. "But the mechanism for these jets is the same as in many astrophysical systems. Astrophysical jets elsewhere produce energetic particles, but they are remote and hard to diagnose. Our jets are nearby so we might be able to figure out how they produce the energetic particles measured in the heliosphere."

To support their heliosphere model, the scientists turned to additional observations of the tail. Both NASA's Cassini and Interstellar Boundary Explorer, or IBEX, have gathered information about the tail end of the heliosphere by looking at what's called energetic neutral atoms, or ENAs. ENAs are created by energetic particle collisions in space and conveniently travel in straight lines, unlike many other particles in space. Observing ENAs traveling in from a certain area, therefore, can be used to map that region.

"Cassini data showed a similar amount of ENAs from the tail and the nose," said Opher.  "Suggesting that the size of both sides was similar, which means a short tail."

An IBEX paper from 2013 also described as a two-lobed shape down the tail. Opher and Drake suggest that the lobes observed might actually have been the two jets with interstellar, non-heliospheric material in between. The paper on the IBEX results, however, interpreted the heliosphere as having a long tail.

With such previous results, Opher expects the new model to be controversial. “This is going to be heavily, heavily debated,” she said, pointing out that many scientists work from the traditional comet-shaped model of the heliosphere. But, said Opher, the out-of-the-box results coming from spacecraft observations demand a similarly unconventional explanation.

In the meantime, these newly postulated jets look like baby versions of the super-powered jets that exist around exotic objects like black holes and pulsars. They are also seen around proto-stars just being born.  Being able to study these jets in our own backyard provides a homegrown laboratory in which to study a structure that is seen everywhere in the universe.

“If we’re right about all of this, it gives us a local test bed for exploring some very important physics,” said Drake.

New View of the Solar System: Astrophysical Jets Driven by the Sun: https://cmns.umd.edu/news-events/features/2804