On Sunday proton beams circulated in the Large Hadron Collider (LHC) for the first time after a 2-year period of maintenance and upgrades to the machine. From the CERN Control Centre, LHC operators and systems experts kept the beams at their injection energy of 450 gigaelectronvolts (GeV), far below the target energy of 6.5 teraelectronvolts (TeV) per beam. Now the operators are testing the accelerator's subsystems and optimizing key beam parameters in preparation for increasing the beam intensity and ramping up the energy. 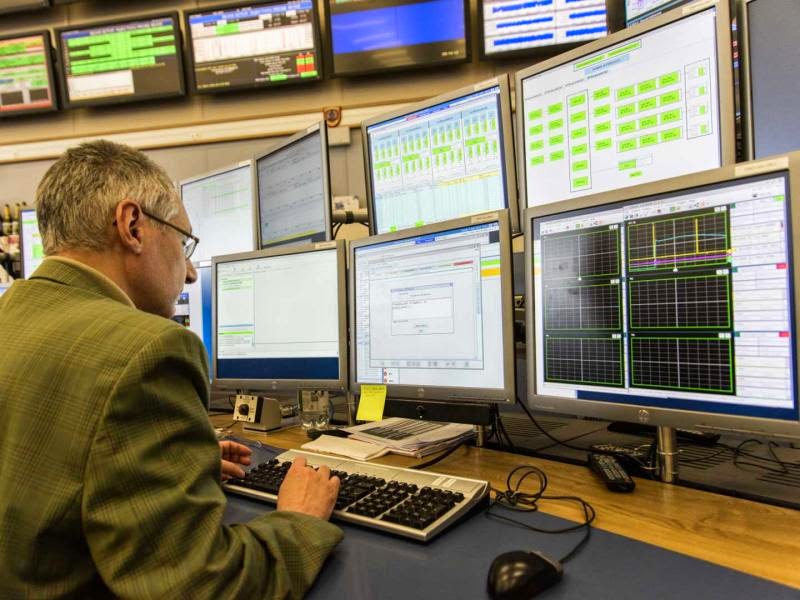 Image above: LHC operators will spend the coming weeks testing and checking all of the accelerator's many subsystems from the CERN Control Centre (Image: Maximilien Brice/CERN).

Only when the machine is sufficiently tuned – and the team declares "Stable Beams" with the beams in collision at the new energy of 6.5 TeV per beam – will the physics data taking begin. This work will take many weeks.

"Beams at injection energy are a useful way of checking that all is running as it should," says LHC operator Ronaldus SuykerBuyk. "For example, we use these low-intensity beams to make sure that our beam-diagnostic equipment is working properly and is well calibrated.”

The team will spend most of the time from now until collisions checking and rechecking a whole wealth of subsystems on the LHC. For example, the Machine Protection subsystem ensures that the LHC is protected from its own beams. It includes the beam dump, beam interlock system, collimators, and beam-energy tracking devices. 'Loss maps' tell the team where the beam is losing particles along the ring. Then there's Beam Instrumentation, which includes position monitors, beam-loss monitors and synchrotron-light monitors among other devices. Not to mention the radiofrequency, vacuum, beam-optics and injection systems, which all need to be tested and double-checked over the coming weeks. 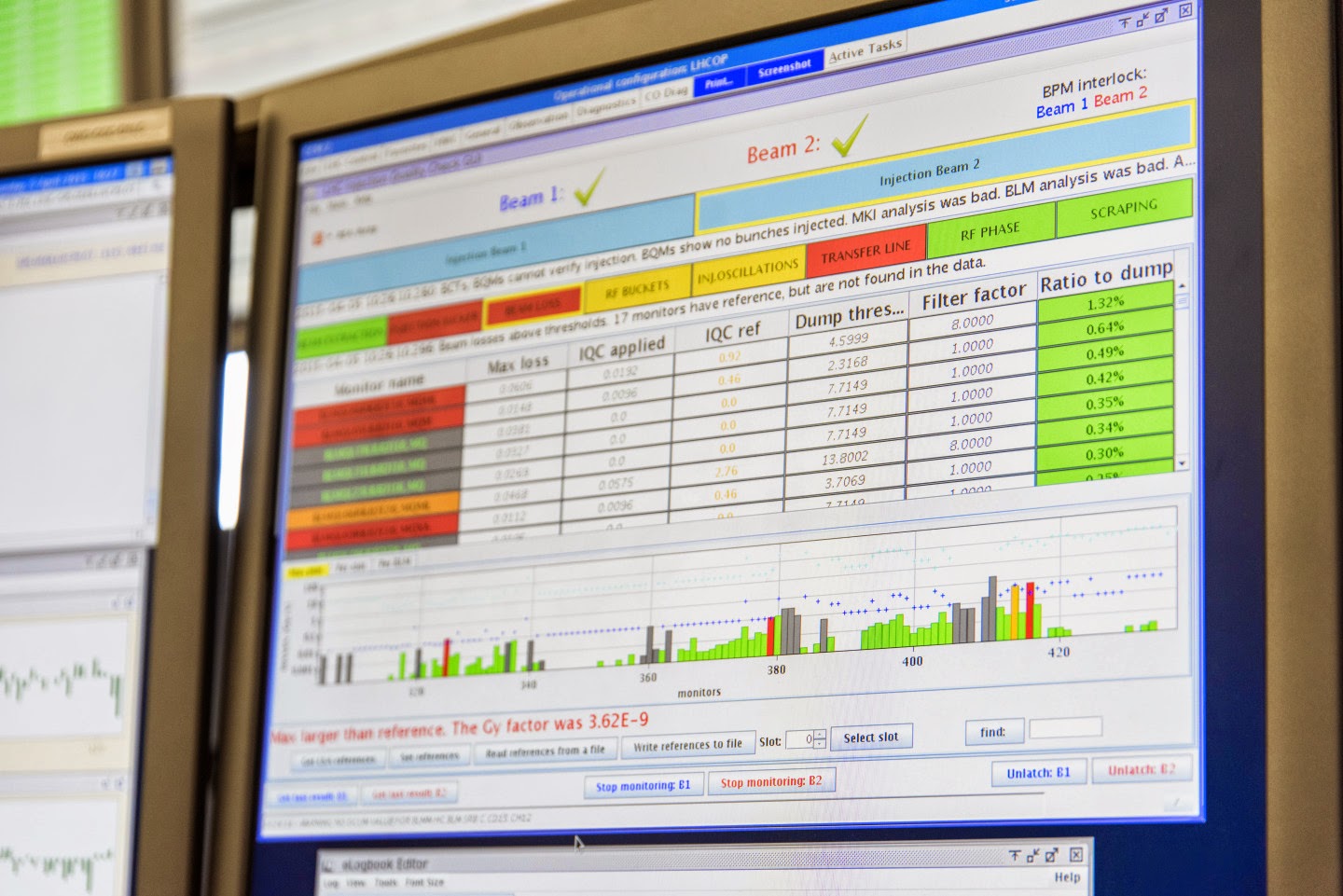 Image above: A wealth of subsystems monitor the quality of beams in the LHC (Image: Maximilien Brice/CERN).

Despite the LHC's complexity, increasing the beam energy is a simple enough process: ramp up the current in the magnets and allow the radiofrequency system to increase the energy of the beams. The current in all the magnets (and hence the magnetic field seen by the beam) is carefully increased as the beam energy rises. The main dipoles provide the necessary centripetal force to bend the beams around the ring. Other magnets such as the quadrupoles have to carefully track along with the increasing dipole field.

"The machine is behaving as expected at 450 GeV," says Mike Lamont of the LHC operations team. "We are now circulating a single bunch of protons, and using it to test our many subsystems. The bunch currently contains about 5 billion protons. When the LHC is ready, we will increase this number to the nominal bunch population of about 120 billion protons per bunch, and focus on fine-tuning the machine for collisions."

For now the team is taking a softly, softly approach, planning on injecting only three bunches of protons at nominal intensity for the first collision attempts, which are expected in the coming weeks. 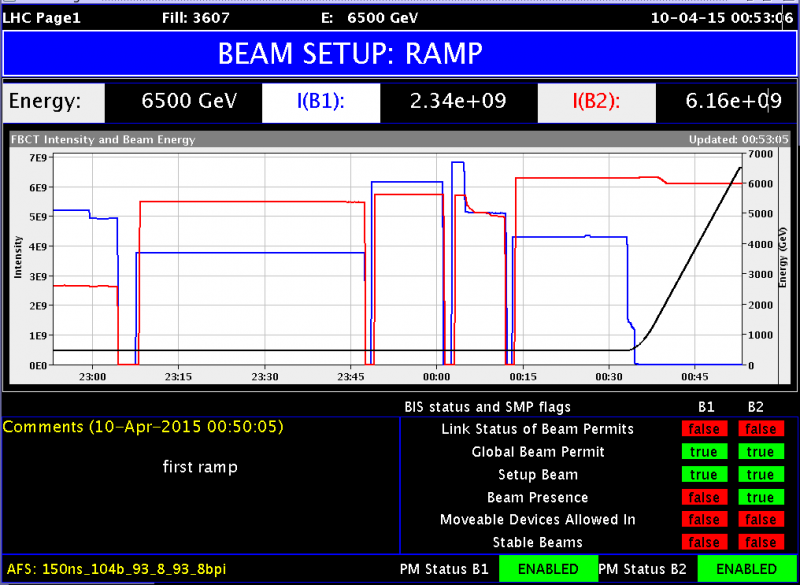 Image above: "LHC page 1" shows the status of the LHC last night. The black line shows the beam energy increasing to 6.5 TeV (Image:LHC/CERN).

Last night the Operations team for the Large Hadron Collider (LHC) successfully circulated a beam at 6.5 teralectronvolts (TeV) - one of many steps before the accelerator will deliver collisions at four interaction points within the ALICE, ATLAS, CMS and LHCb detectors.

The image above shows "LHC page 1"- the status of the accelerator between 10.45pm and 1am last night. The lines on the graph show the intensity of Beam 1 (blue) and Beam 2 (red) as the team injects the beams into the accelerator. The black line shows the energy for Beam 2, which begins to increase at around 12.35am from its injection energy of 450 GeV and ramps to 6.5 TeV (shown as 6500 gigaelectronvolts at the top left of the screen).