Chasing clouds in the LHC

It’s time for a big summer clean in the Large Hadron Collider (LHC), but you won't see operators armed with feather dusters sprucing up the 27-km machine. The pipes in which the beams circulate are already ultra-clean and ultra-high vacuum: the pressure in the beam pipes is just 10-10 or even 10-11 millibars – similar to on the Moon.

However, despite the ultra-high vacuum, residual gas molecules remain trapped on the surface of the walls of the beam pipes, which also contain electrons. When the beams circulate, these electrons are emitted from the walls and accelerated by the beam’s electrical field. The accelerated electrons then hit the walls with enough energy to release the trapped molecules, thereby compromising the vacuum. At the same time, they set off an avalanche of even more electrons, forming electron clouds that can be dense enough to destabilise the beam. The electron-cloud phenomenon is amplified the higher the number of proton bunches in the beam and the more closely spaced they are.

The operators therefore need to dissipate the electron clouds before the LHC can run with more proton bunches. To do that, they've developed a beam scrubbing technique that involves circulating enough protons to release as many trapped gas molecules as possible from the metal and to reduce the rate of production of electrons on the walls of the pipe. 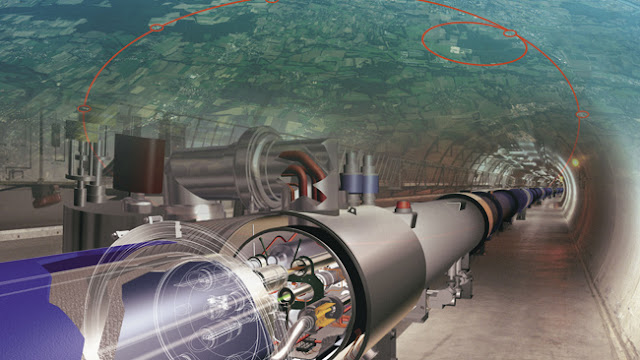 The operators will thus circulate intense beams (containing many bunches) but at low energies in order to improve the beam pipe surface. After a few days, the LHC will be ready to be ramped up to higher-intensity beams for physics and to restart with 50-nanosecond bunch-spacing. The number of bunches will be gradually increased to 1000 bunches per beam. Another scrubbing run will be performed in the summer to prepare the LHC for operation with more bunches spaced even more closely together later in the year.