Image above: Figure 1: Electron (candidate) event image in the TeV region observed on Oct. 14 during the initial verification and data calibration (presented by particle number converted from pulse height).

With this kind of imagingtechnology of cosmic rays, we can determine the type (electrons, gamma-rays, proton/atomic nucleus), the incoming direction and the energy.

The left figure is an image viewed from the X-direction, and the right one is from the Y-direction. Using them both, 3D data processing becomes possible.

CALET is an observation instrument equipped with cutting-edge detectors and electronic technology to perform very high precision observations of extremely high-energy electrons, gamma-rays, protons and atomic nucleus, which have been difficult to perform to date, and also measure gamma-ray burst phenomena. Through the CALET observations, we are aiming at elucidating cosmic / universal mysteries including 1) origin and acceleration mechanism of high-energy cosmic rays, 2) diffusion mechanism of cosmic rays within the Galaxy, and 3) dark matter signature. 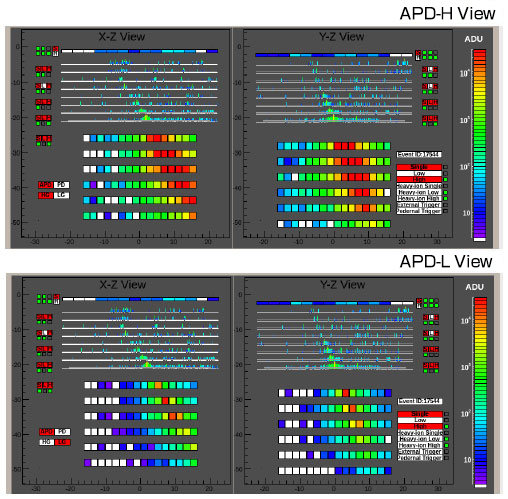 It is the raw data for the event image of electrons (candidates) in the TeV region shown in Figure 1 on the previous page.

CALET (CALorimetric Electron Telescope) is a mission instrument to observe high-energy cosmic rays in space. CALET is installed on the Exposed Facility of the Japanese Experiment Module "Kibo" at the International Space Station (ISS). It is a joint research project of JAXA and Waseda University led by Professor Shoji Torii (Faculty of Science and Engineering, Waseda University). Among the Japanese team, 22 research institutes such as Kanagawa University, Aoyama Gakuin University, and the Institute for Comic Ray Research, University of Tokyo, are also participating in this project.

In addition, NASA and the Italian Space Agency (Agenzia Spaziale Italiana, ASI) cooperated to develop CALET. NASA and American researchers provided us with technical support for the cosmic rays observation sensor technology, while ASI and Italian researchers assisted us with high-voltage power and cosmic rays observation sensor technology. Both of them will mutually cooperate in analyzing CALET observation data.

The calorimeter is an instrument to measure the energy of high-energy particles. When an electron or gamma-ray passes through a matter, electromagnetic interactions, such as bremsstrahlung and electron-positron pair creation, occurs successively and increases particles (cascade shower). The calorimeter is an instrument to determine energy of incoming particles by measuring energy loss of the shower particles.

CALET is a three layer structure. The TASC, which lies at the bottom, adopts "lead tungstate (PbWO4) crystals" for a scintillator. It is the thickest scintillator as a cosmic ray observation instrument, and has the incomparable capability of precisely determining energy and identifying particle at high energies over 1 TeV. The cross section of the scintillating fibers used in the IMC in the middle layer is 1 square mm so that we can obtain sufficient information by read-out of each fiber data, which is necessary for determining the arrival direction and types of incoming cosmic rays. Therefore, CALET can explore the high-energy region as a whole calorimeter, which had been difficult to observe by a conventional method.

Conventional research says that dark matter is highly likely the "weakly interacting massive particles (WIMP)" which was generated at the early universe. In theory, the WIMP creates already-known elementary particles (such as electron/positron pairs) through pair annihilation and decay, and the maximum energy of the created particles is limited to the mass energy of the WIMP. The WIMP's mass is expected to be more than several 100 GeV based on the past observation of electron/positron. Therefore, observation of electrons/positrons in the TeV region by CALET calorimeter is crucial for searching dark matter. CALET is the first instrument that can achieve the electron observations in such a high-energy region.