When astronauts return to Earth in the Orion spacecraft, they will reenter on an extremely hot and fast journey through the atmosphere before splashing down in the Pacific Ocean. To protect the crew on landing, NASA will evaluate how the spacecraft may behave in parachute-assisted landings in different wind conditions and wave heights by conducting water-impact testing.

NASA’s Orion spacecraft will carry humans farther into space than ever before and provide emergency abort capability, sustain the crew during the space travel, and provide safe re-entry from deep space. 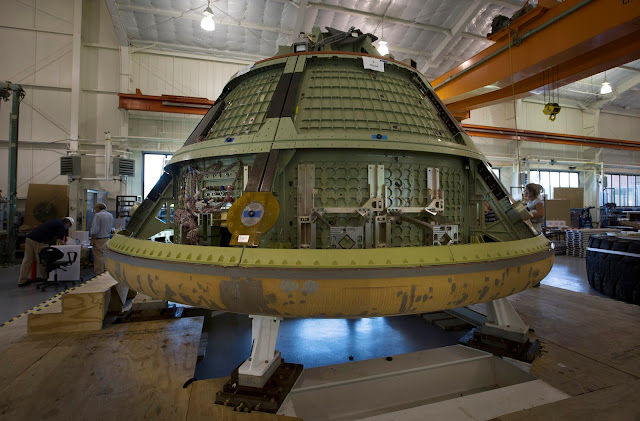 “The tests are designed to produce some of the most stressful water landing conditions that the spacecraft and crew may experience when returning to Earth from actual missions,” said Ellen Carpenter, project manager.

To prepare for this testing, the first major step at NASA’s Langley Research Center in Hampton, Virginia, was to couple an Orion crew module mockup with the heat shield from the spacecraft’s first flight test, Exploration Flight Test 1 (EFT-1).

"It is important to use a heat shield that is similar to what will be used on future Orion flights so the data obtained from these tests can be used to validate computer models,” Carpenter explained.

However, the heat shield, which fit perfectly with the EFT-1 Orion crew module, was not designed to mate with the mockup.

“It was challenging in the fact that we had to make sure the pieces were aligned horizontally, vertically, rotationally and then angularly,” Carpenter said.

To create perfect unity, the team had to design and fabricate integration hardware to connect the two pieces. With an accuracy of four thousandths of an inch, a laser tracker located several positions along the Orion mockup and heat shield in order to achieve nearly perfect alignment.

“This was crucial so that the integration hardware could be match drilled” Carpenter said. Match drilling is the process of precisely drilling holes through hardware components and ensures that the parts align properly in the final assembly.

During this effort, more than 400 holes were match drilled to assemble the mockup to the heat shield. At the same time, the team prepared the remainder of the mockup for water-impact testing. These preparations included placing instruments and sensors inside the structure and installing the system that will be used to store the sensor data from the water impact tests. The team then installed the crew seats and the crew impact attenuation system that is designed to lessen the shock load on astronauts during landing. 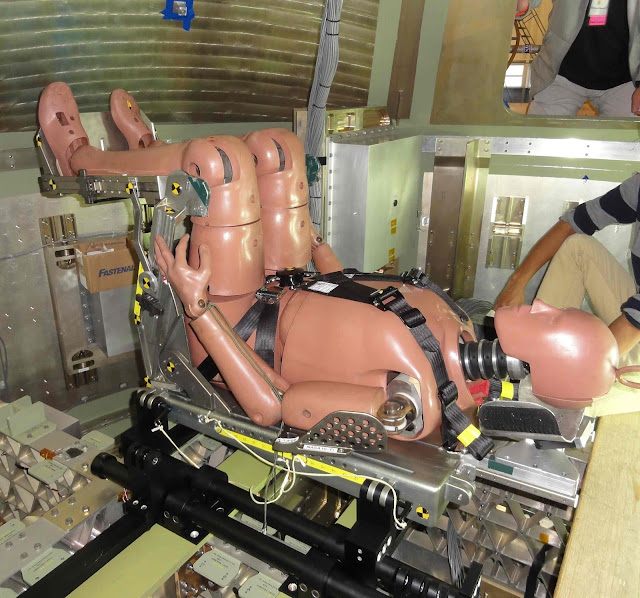 Image above: Engineers at NASA’s Langley Research Center in Hampton, Virginia, placed a test dummy inside a NASA Orion crew module mockup in preparation for next year’s water impact testing, which will simulate the spacecraft splashing down in the Pacific Ocean during future crewed missions. Image Credits: NASA/David C. Bowman.

Two test dummies were also installed in the crew seats. Data retrieved from sensors inside the dummies during testing will be used to evaluate the loads the crew may experience during an actual mission, which will aid in designing the systems to protect the crew from injury during water landings.

After the thorough work of joining the mockup and the heat shield for the first time, the team then disassembled the hardware to install sensors on the heat shield and conduct static tests.  A static test applies a simple force to the heat shield structure while it is not in motion to verify that the sensor readings are consistent with the computer models.

“Preliminary static testing gives us the necessary confidence to calibrate the computer analytical models that simulate landing in the ocean,” Tarkenton said. “Then we’ll take the data collected from the actual water impact testing and use it to validate the models."

Following static testing, the team can move onto final vehicle assembly and ultimately to water-impact testing. During final assembly, the team will reattach the heat shield to the mockup, waterproof the entire assembly, complete final sensor checks, and then conduct the drop tests into the Hydro Impact Basin at Langley’s Landing and Impact Research Facility. 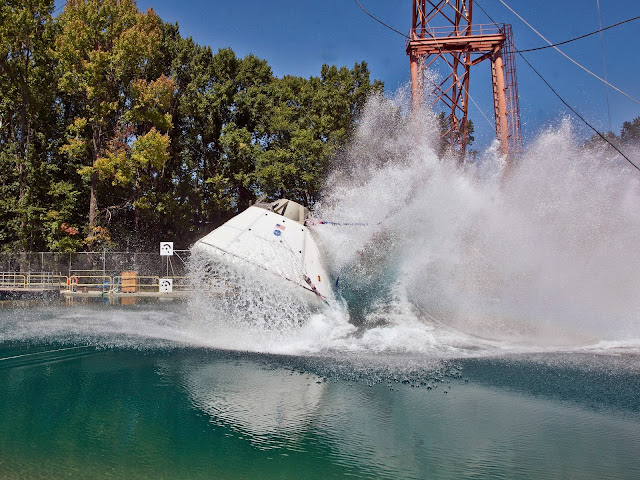 Engineers have developed numerous models to anticipate possible wave and wind conditions, but full-scale testing provides insights that can't be gained from models in the laboratory. Water-impact testing will improve the accuracy of computer models that will be used to design the crew module for future Orion missions.

Nine drop tests of the integrated Orion mockup and EFT-1 heat shield will be conducted at Langley next year. These tests are but one of the many steps necessary to ensure that NASA’s new spacecraft will meet the demands of sending humans to deep space for the first time and in the future on the journey to Mars.