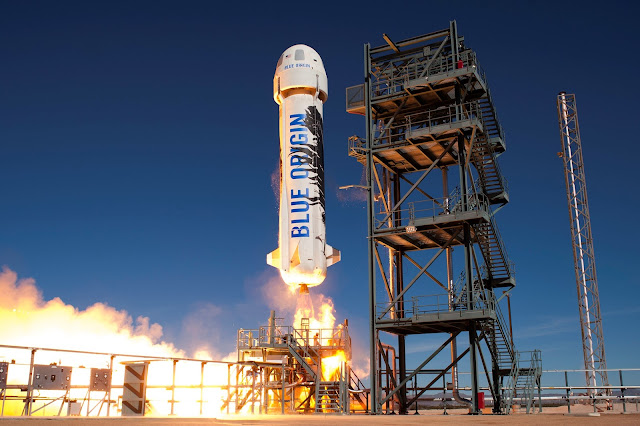 Image above: The same New Shepard booster that flew to space and then landed vertically in November 2015 has now flown and landed again. Image Credit: Blue Origin.

On January 22, 2016 the very same New Shepard booster that flew above the Karman line and then landed vertically at its launch site last November has now flown and landed again, demonstrating reuse. This time, New Shepard reached an apogee of 333,582 feet (101.7 kilometers) before both capsule and booster gently returned to Earth for recovery and reuse.

Data from the November mission matched our preflight predictions closely, which made preparations for today’s re-flight relatively straightforward. The team replaced the crew capsule parachutes, replaced the pyro igniters, conducted functional and avionics checkouts, and made several software improvements, including a noteworthy one. Rather than the vehicle translating to land at the exact center of the pad, it now initially targets the center, but then sets down at a position of convenience on the pad, prioritizing vehicle attitude ahead of precise lateral positioning. It’s like a pilot lining up a plane with the centerline of the runway. If the plane is a few feet off center as you get close, you don’t swerve at the last minute to ensure hitting the exact mid-point. You just land a few feet left or right of the centerline. Our Monte Carlo sims of New Shepard landings show this new strategy increases margins, improving the vehicle’s ability to reject disturbances created by low-altitude winds. 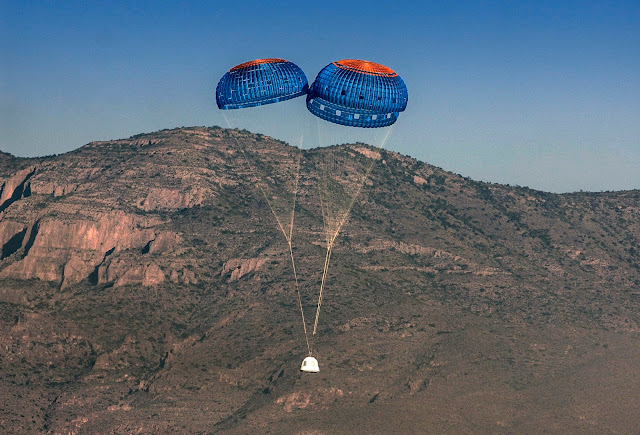 Image above: After a clean separation from the propulsion module, the New Shepard crew capsule descends to a gentle landing in the west Texas desert. Image Credit: Blue Origin.

Though wings and parachutes have their adherents and their advantages, I’m a huge fan of rocket-powered vertical landing. Why? Because — to achieve our vision of millions of people living and working in space — we will need to build very large rocket boosters. And the vertical landing architecture scales extraordinarily well. When you do a vertical landing, you’re solving the classic inverted pendulum problem, and the inverted pendulum problem gets a bit easier as the pendulum gets a bit bigger. Try balancing a pencil on the tip of your finger. Now try it with a broomstick. The broomstick is simpler because its greater moment of inertia makes it easier to balance. We solved the inverted pendulum problem on New Shepard with an engine that dynamically gimbals to balance the vehicle as it descends. And since New Shepard is the smallest booster we will ever build, this carefully choreographed dance atop our plume will just get easier from here. We’re already more than three years into development of our first orbital vehicle. Though it will be the small vehicle in our orbital family, it’s still many times larger than New Shepard. I hope to share details about this first orbital vehicle this year. 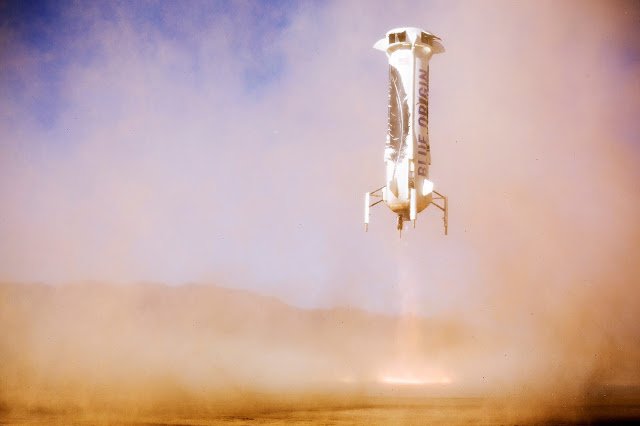 Also this year, we’ll start full-engine testing of the BE-4 and launch and land our New Shepard rocket – again and again. If you want to stay up to date with all the interesting work that our team is doing, sign up for email updates at http://www.blueorigin.com/interested.