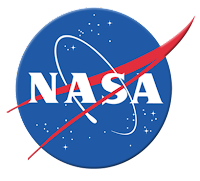 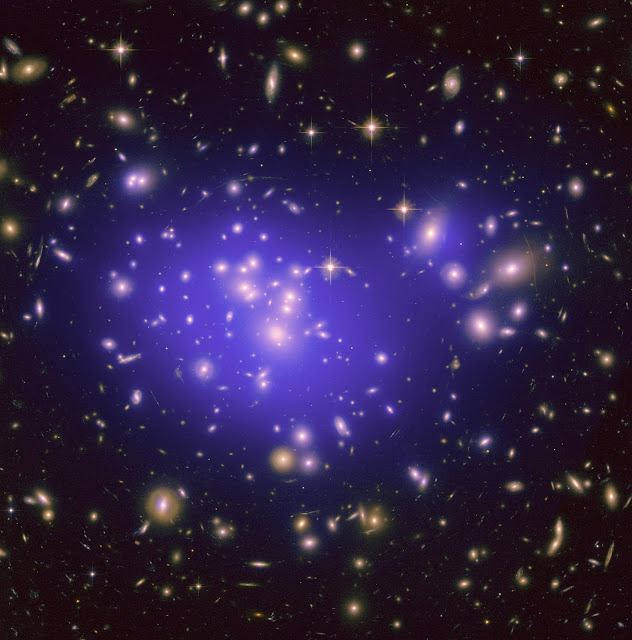 Image above: This image from NASA's Hubble Space Telescope shows the inner region of Abell 1689, an immense cluster of galaxies. Scientists say the galaxy clusters we see today have resulted from fluctuations in the density of matter in the early universe. Image Credits: NASA/ESA/JPL-Caltech/Yale/CNRS.

Dark matter is a mysterious cosmic phenomenon that accounts for 27 percent of all matter and energy. Though dark matter is all around us, we cannot see it or feel it. But scientists can infer the presence of dark matter by looking at how normal matter behaves around it.

Galaxy clusters, which consist of thousands of galaxies, are important for exploring dark matter because they reside in a region where such matter is much denser than average. Scientists believe that the heavier a cluster is, the more dark matter it has in its environment. But new research suggests the connection is more complicated than that.

"Galaxy clusters are like the large cities of our universe. In the same way that you can look at the lights of a city at night from a plane and infer its size, these clusters give us a sense of the distribution of the dark matter that we can't see," said Hironao Miyatake at NASA's Jet Propulsion Laboratory, Pasadena, California.

A new study in Physical Review Letters, led by Miyatake, suggests that the internal structure of a galaxy cluster is linked to the dark matter environment surrounding it. This is the first time that a property besides the mass of a cluster has been shown to be associated with surrounding dark matter.

Researchers studied approximately 9,000 galaxy clusters from the Sloan Digital Sky Survey DR8 galaxy catalog, and divided them into two groups by their internal structures: one in which the individual galaxies within clusters were more spread out, and one in which they were closely packed together. The scientists used a technique called gravitational lensing -- looking at how the gravity of clusters bends light from other objects -- to confirm that both groups had similar masses.

But when the researchers compared the two groups, they found an important difference in the distribution of galaxy clusters. Normally, galaxy clusters are separated from other clusters by 100 million light-years on average. But for the group of clusters with closely packed galaxies, there were fewer neighboring clusters at this distance than for the sparser clusters. In other words, the surrounding dark-matter environment determines how packed a cluster is with galaxies. 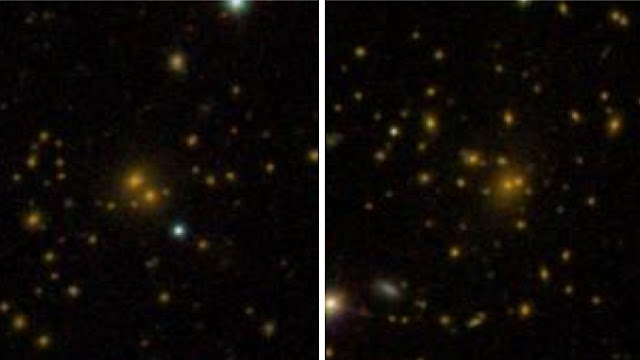 "This difference is a result of the different dark-matter environments in which the groups of clusters formed. Our results indicate that the connection between a galaxy cluster and surrounding dark matter is not characterized solely by cluster mass, but also its formation history," Miyatake said.

Study co-author David Spergel, professor of astronomy at Princeton University in New Jersey, added, “Previous observational studies had shown that the cluster’s mass is the most important factor in determining its global properties. Our work has shown that ‘age matters': Younger clusters live in different large-scale dark-matter environments than older clusters.”

The results are in line with predictions from the leading theory about the origins of our universe. After an event called cosmic inflation, a period of less than a trillionth of a second after the big bang, there were small changes in the energy of space called quantum fluctuations. These changes then triggered a non-uniform distribution of matter. Scientists say the galaxy clusters we see today have resulted from fluctuations in the density of matter in the early universe.

"The connection between the internal structure of galaxy clusters and the distribution of surrounding dark matter is a consequence of the nature of the initial density fluctuations established before the universe was even one second old," Miyatake said.

Researchers will continue to explore these connections.

“Galaxy clusters are remarkable windows into the mysteries of the universe. By studying them, we can learn more about the evolution of large-scale structure of the universe, and its early history, as well as dark matter and dark energy," Miyatake said.