CERN - In theory: Welcome to the Theory corridor 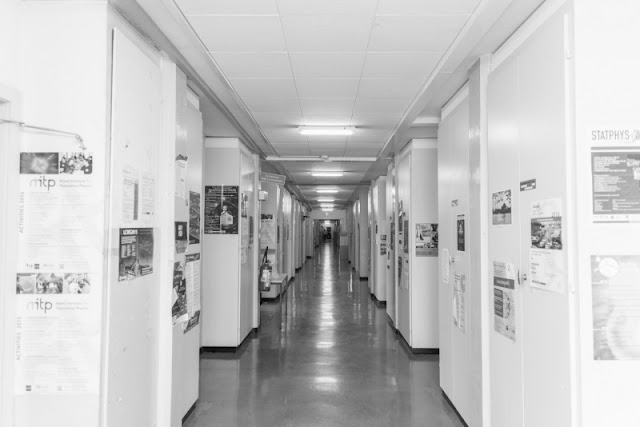 Image above: One of CERN’s Theory corridors – along here are the offices of most of CERN’s theory department including those who were interviewed for this series of articles. (Image: Sophia Bennett/CERN).

There are corridors at CERN lined with wooden doors and rusted metal cabinets, where aged, peeling leaflets for long-a-go conferences paper the walls next to comic strips and photos. 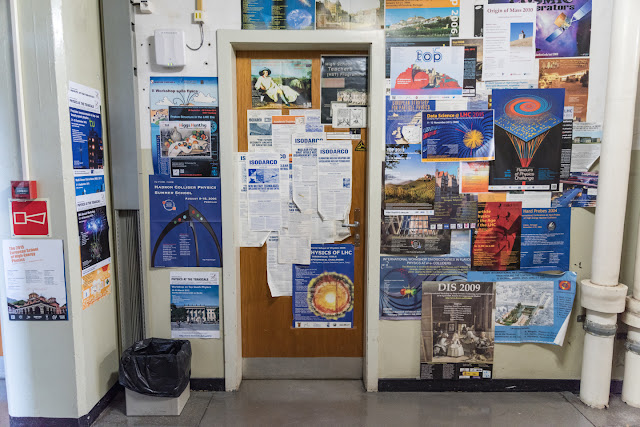 Image above: Many of the doors along the corridor have comic strips, posters for events, or cheeky notes to the office-owners. Often the office has been held by one physicist for several years, and space on the door runs out posters spread beyond, onto the walls around until they almost merge into each other. (Image: Sophia Bennett/CERN).

Known at CERN as ‘the Theory corridor’, this is the home at CERN for some of the world’s most brilliant minds. 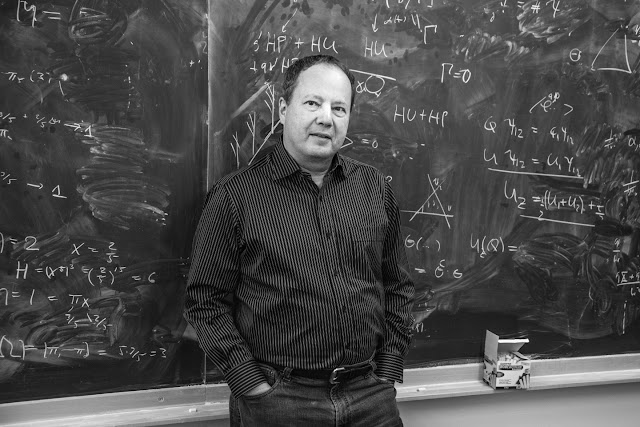 Image above: One of the first offices you come across belongs to Wolfgang Lerche,Head of Theory until December 2015. Lerche grew up in Munich and stands alone amongst the theorists we spoke to in that he enjoyed being practical and tinkering with radios and electronics as a child – a trait more commonly associated with experimentalists. (Image: Sophia Bennett/CERN).

Behind these heavy wooden doors, theoreticians are using equations, computer modelling and logic to try and understand the underlying laws of our  universe. Here ideas, such as supersymmetry, are born, often decades before technology and experiments can provide the evidence to back those ideas up. 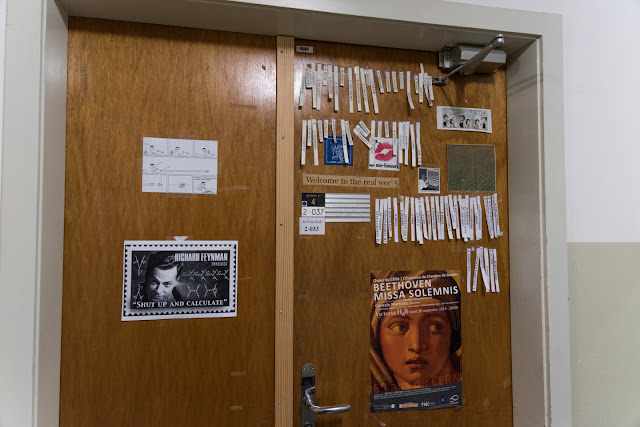 Image above: Many theoreticians have to travel regularly or move to different countries for their work. While senior members of staff get an office, the PhD students, summer students and visiting researchers all share offices. The white strips of paper stuck to this door are nameplates – instead of re-printing one each time, when someone moves into the office they swap their name into position, and take it out to stick back on the door once they leave. (Image: Sophia Bennett/CERN).

Theoreticians are an integral part of particle physics, providing experimentalists with a background to their research. Their work has always been a starting point for CERN physics – the "Group of Theoretical Studies" was created even before a location had been determined for CERN itself – showing physicists what and where they should be looking for the next discovery. 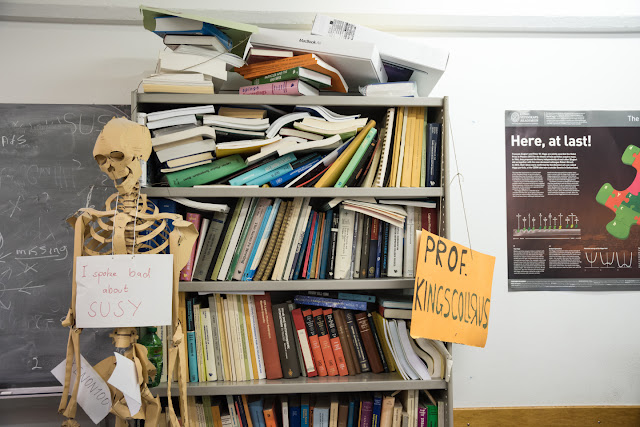 Image above: One of the most recognizable offices along the corridor belongs to John Ellis, of Kings College London. He has wanted to be a physicist since he was 12 years old when he took physics books out of the library as he wasn’t yet old enough to loan “good fiction”. (Image: Sophia Bennett/CERN).

Over the coming weeks, the "In Theory" series will introduce you to the Theory department and give you a behind-the-scenes glimpse of what life is like for some of the individuals within it. 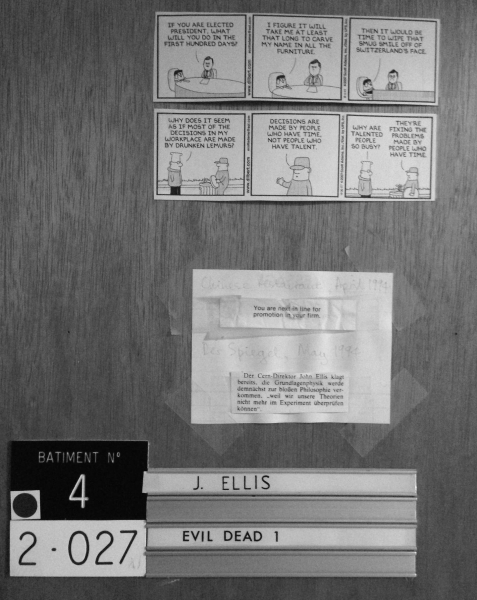 Image above: His office at CERN is piled with books and papers and his blackboard is covered with notes from students – often teasing him about his research into the theory of supersymmetry (SUSY). (Image: Sophia Bennett/CERN). 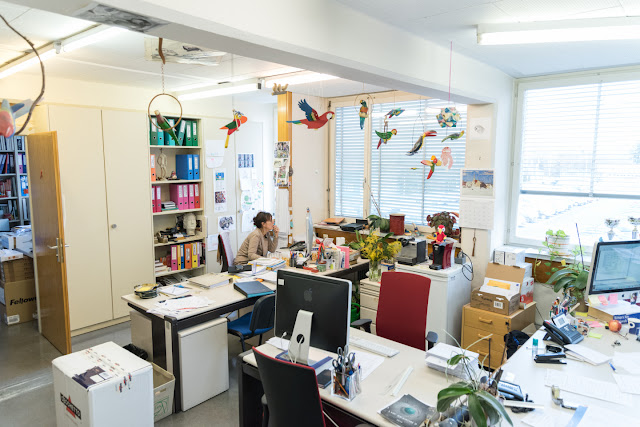 Image above: The Theory Secretariat are the last office along the corridor and the hub of the department. They are vital in organising the life of the corridors – from arranging seminars to welcoming visiting theorists. (Image: Sophia Bennett/CERN). 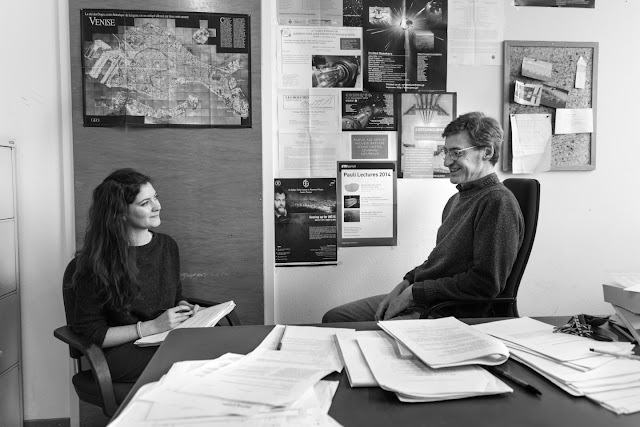 Image above: “We’re after bigger questions, why things work the way they work, and that’s the essence of theoretical physics” - Gian Giudice is the new Head of the Theory department, seen here being interviewed for the In Theory series in his office. (Image: Sophia Bennett/CERN).

Over the next six weeks the In Theory series will publish a new article weekly on a different aspect of the Theory department, starting next week with what makes a theoretical physicist.