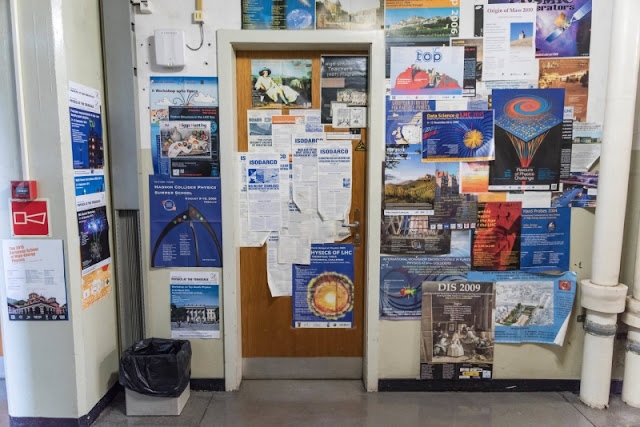 Image above: Within theoretical physics there are several different theories. Researchers often dedicate their lives to understand one of these theories fully. (Image: Sophia Bennett/CERN).

Listening to a theoretician talk about their field can be a bit like listening to a football fan talking about the team they support.

Whether they fell in love with string theory because of the excitement of something new, like a World Cup win, or doggedly pursued supersymmetry despite several losses, theoreticians will stand by their field while they're working on it, rarely moving into other theories.

This almost obsessive pursuit of one field means, like a supporter who can reel off the goal scorer for every game, theoreticians focus on knowing the ins and outs of their own field.

“The level of complexity of the different branches of theoretical physics is such that nobody can be an expert in everything,” says Gian Giudice, the head of the theory department, who works on particle physics and cosmology. 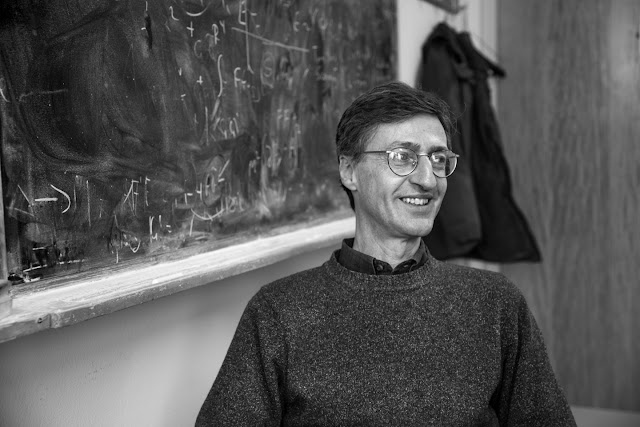 Image above: Gian Giudice is the head of CERN's Theory Department. He believes that the way science develops often follows paths that are much less logical and rational than most people think. Only at the end of the process a clear picture emerges and then, in retrospect, everything looks simple and straightforward. (Image: Sophia Bennett/CERN).

This can be crucial for them to understand how new developments fit in with the field’s history, who the big players are and how it might influence their own work.

"Our ideas constantly evolve as we are confronted with new theoretical developments and new experimental results. That's why theoretical physicists rarely spend all their careers working on the same subject, but always thrive to break new ground," Giudice explains.

My team’s better than your team

The same factors that influence the football team you choose to support, such as where you live, or who’s the most successful, also play a huge part in influencing why theoreticians might follow their field.

“Just as I moved to Princeton, in the US, the superstring theory exploded. I’d just moved, so it was natural to work on it, as everyone in Princeton was doing it,” says Michelangelo Mangano on how he was first led into string theory. 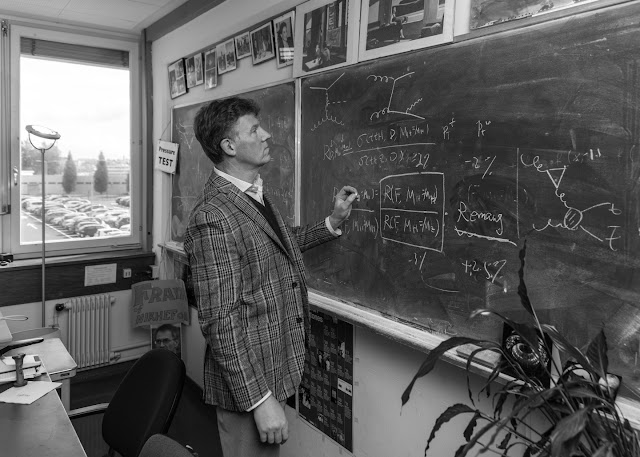 Image above: “If a new idea comes up suddenly a large cluster of people start working on that and you see every day there’s a new paper coming out on that subject. Within two days everyone who has an interest has read the paper. And then you can start a new collaboration, or a fight in case you disagree.” – Michaelangelo Mangano (Image: Maximillien Brice/ CERN).

It was similar for Wolfgang Lerche, who became a theoretical physicist at a similar time to Mangano.

“I became a fellow at CERN the year string theory became the big topic.  We fellows were sitting together, trying to get into the field, the lecture theatre was packed, and there was so much excitement. We all thought this was it, that we’ll have solved everything within months, at most a year or so. But it didn’t happen that way,“ he explains.

“Yes, fashions influence people on the choice of the subject they work on. But the excitement about a subject persists only if important conceptual advancement follows. If not, fashions fade away. Other people prefer to pursue paths that are orthogonal to fashions. Most of the time they hit a dead end, but sometimes they are the ones that make the breakthroughs.” — Gian Giudice.

But Bryan Lynn – a professor at Case Western Reserve University, USA, who left academia for a career on Wall Street and in London's City before returning to teach theoretical physics – believes that mentors, PhD supervisors and professors have more influence on molding young physicists and encouraging them to pursue certain fields and theories. He experienced pressure from his supervisor not to study model building, despite writing what he describes as a ‘beautiful research paper’.

“The paper had some model building in it. So I went to my supervisor and asked him about it. He said 'why are you working on this rubbish?' Then he basically tore my paper up and threw it away.” 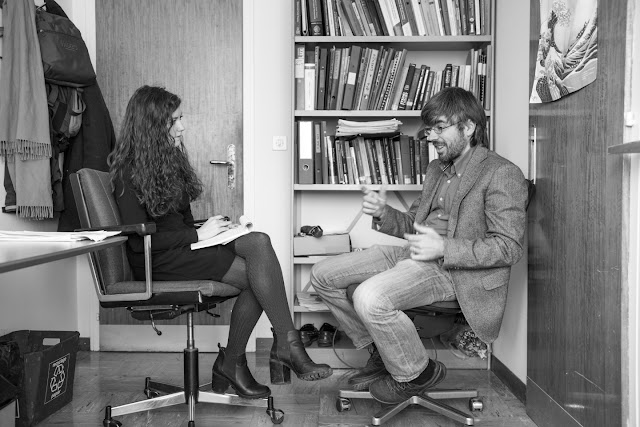 Image above: "On one end of the spectrum are people who speculate to come up with models, and this can take extreme proportions that start bordering on being a bit crackpot,” laughs Slava Rychkov (right) being interviewed for this article series by Harriet Jarlett (Image: Sophia Bennett/CERN).

Inevitably, with so many opposing fields in such a competitive science many theoreticians look down on other theories as being less likely to be proved right.

“On one end of the spectrum are people who speculate to come up with models, and this can take extreme proportions that start bordering on being a bit crackpot,” laughs Slava Rychkov, a theoretician at CERN. “Then there are the people who dedicate their lives to technically very challenging computations to get very high precision predictions.”

“The great thing about science is that eventually you get to know the answer, either there is a Higgs Boson or there isn’t, you know which theory is best. But before you reach that moment of closure you’re going to have these tribes – some people call them schools of thought – that compete against each other,” explains John Ellis of Kings College, London, who has worked at CERN since 1973.

This rivalry means that young theorists often feel like they would be looked down on for pursuing one field over another, especially if it’s not fashionable. 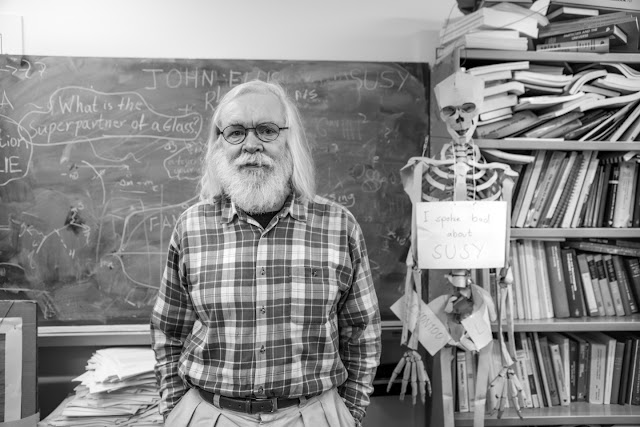 Image above: John Ellis, who has worked at CERN since 1973, work is in the field of Supersymmetry (SUSY). (Image: Sophia Bennett/ CERN).

“There’s a race to publish, especially in this field, as people are judged by the number and weight of their research publications,” Lerche says. “Having a really good idea, or better several of them, is a key factor to landing a permanent position at some point”

This competitive nature, where early career researchers try to beat each other to their goal, whether it’s to publish their science or to put their name to a new theory, is not unique to theoretical physics. But in a subject like this where groups are small and isolated, it can feel personal. 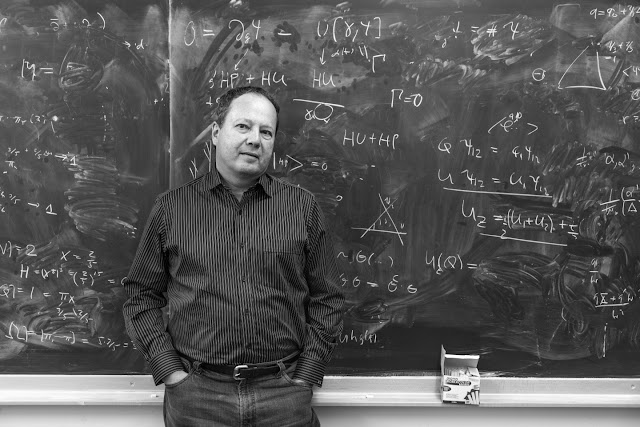 Image above: “There’s a race to publish, especially in this field, as people are judged by the number and weight of their research publications,” Wolfgang Lerche, pictured here, says. (Image: Sophia Bennett/ CERN).

“You do see some early career researchers immediately projected into the limelight and contributing on an equal footing to more senior people. It’s more likely in a branch of string theory or fundamental theories because there’s an evolution happening now, there’s lots of new techniques emerging for them to put their stamp on,” explains Mangano.

While for some success comes early on in their career, for others they have to dedicate their lives to the challenge of unraveling a theory.

“I admire some of the theoreticians, like those working on lattice field theory, they stuck at it for forty years before they discovered something, like Darwin.”

“Darwin looked at his backyard his whole life measuring dirt. He measured it, the dirt! And discovered almost at the end of his life that earthworms make the soil, they didn't know that before, That's science, this cumulatively fanatical look at nature, that’s science.” describes Lynn.

The next article in the In Theory series, to be published next week, will be on how theoretician’s end up with so many stamps in their passports. Read the previous articles:

CERN - In theory: Welcome to the Theory corridor:
http://orbiterchspacenews.blogspot.ch/2016/02/cern-in-theory-welcome-to-theory.html

CERN - In Theory: why bother with theoretical physics?:
http://orbiterchspacenews.blogspot.ch/2016/03/cern-in-theory-why-bother-with.html