Yuri Milner, investor and Russian billionaire, unveiled alongside the famous physicist Stephen Hawking, his plan to send micro-probe to Alpha Centauri, the closest star system to Earth. The head in the stars, some billionaires seem to enjoy putting their wealth in the aerospace service. After Elon Musk and Jeff Bezos, it is the turn of Yuri Milner of talking to him with his project for the less visionary. 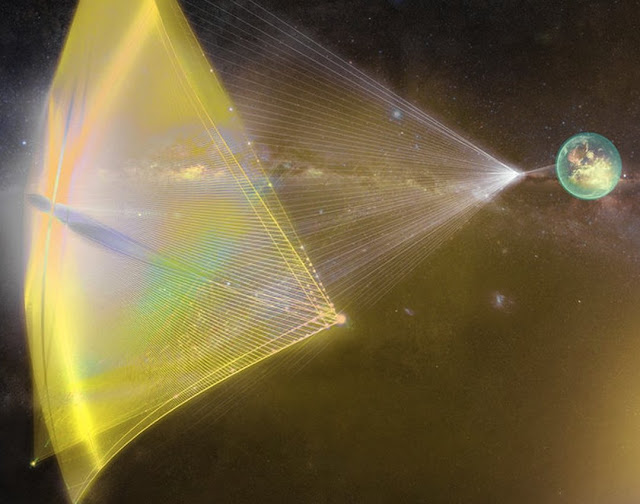 Image above: A probe about the size of a smartphone, a sail and lasers to push. Image Credits: BreakthroughStarshot.

Called "Breakthrough Starshot", it is just as ambitious as that of his predecessors. Philanthropist wants indeed to send into space a fleet of tiny spacecraft to Alpha Centauri, the closest star system to Earth. The challenge lies in the distance of travel, estimated at 4.37 light years, more than 41,000 billion kilometers. Knowing that the New Horizons spacecraft, which reached Pluto last year, is moving at a speed of 49 kilometers per second, it would take over 24,000 years to reach this destination.

Micro-probe traveling 20% ​​of the speed of light

Suffice to say, the man of business will have to show a lot of innovation to develop a new generation of high-speed vessels. Those he planned with his team of Silicon Valley, are the size of a chip and could reach 60,000 kilometers per second, or 20% of the speed of light. A true record.

At this speed, the journey could be done in just twenty years, possibly leaving the billionaire 54 years time to enjoy the fruits of his efforts. At a conference broadcast live on the Web, the investor announced, not without eloquence, plans of this impressive expedition. "For the first time in history, we can do more than look at the stars, we can achieve them. It is time to take the next big leap in the history of humanity," he said. And for this, Yuri Milner is ready for anything.

The principle of photonic propulsion

The billionaire has decided to invest its $ 100 million pocket (€ 88 million) and is surrounded by the greatest astrophysicists including the famous Stephen Hawking. Together they devised a system based on the principle of photonic propulsion. It consists of tow using a light sail micro probes of a few grams at most. The device will be powered by a laser beam of 100 gigawatts sent from Earth. For comparison, this represents a little more than the energy required to peel a space shuttle.

The project aims to use only existing core technologies and improve. Estimating 20 years development time, it would be possible to receive images Alpha Centauri by 2061. The probes will meanwhile be mass produced to explore areas closer adjoining our solar system.

I would like to personally thank these visionary men and pioneers of the exploration and colonization of space, the future of humanity is in the stars. Planet Earth is our cradle, space our home. Ad Astra Per Aspera! Roland Berga.