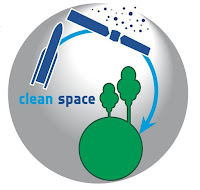 The target is set: a large derelict satellite currently silently tumbling its way through low orbit. If all goes to plan, in 2023 it will vanish – and efforts against space debris will have made a giant leap forward.

That is the vision underpinning e.Deorbit, intended as the world’s first mission to remove a large piece of space junk – if it is given the initial go-ahead by Europe’s space ministers at the Agency’s Ministerial Council in December. 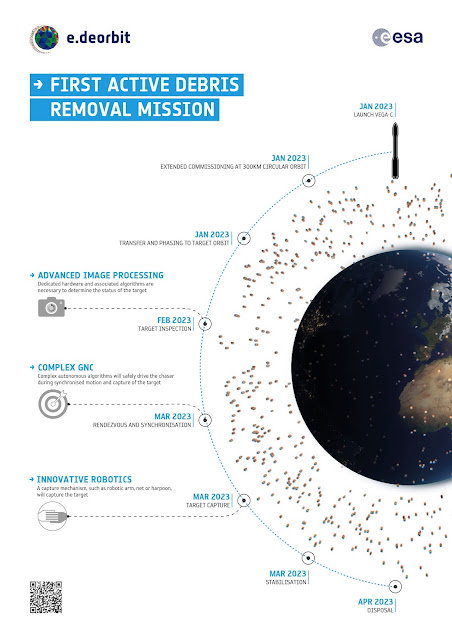 The basic idea is simple: set a satellite to catch a satellite. e.Deorbit will rendezvous with, grapple and hard-capture the drifting satellite, then push the pair down to burn up harmlessly in the atmosphere.

More than 75% of trackable space debris whizzes around in Earth’s heavily trafficked low orbits, below 2000 km altitude. Even if all launches stopped tomorrow, the level of debris would go on rising, driven by continuing collisions.

The only way to stabilise debris levels over the long run will be to remove entire large items.

“While the concept is straightforward, the implementation is not – e.Deorbit will be like nothing ESA has ever attempted before,” explains Robin Biesbroek, ESA’s study manager.

“The chaser satellite requires extremely sophisticated guidance, navigation and control to synchronise motion and then capture its target, guided in turn by advanced image processing, blending inputs from optical and multispectral cameras as well as ‘laser radar’ lidar to derive a precise, reliable sense of the target and its motion.

“In addition, e.Deorbit needs a reliable method of capturing its target. We are now looking at a net, harpoon or gripper as well as advanced robotics to secure the two satellites together.

“Finally, the satellite also requires a very high level of autonomy, because continuous realtime control from the ground will not be practical, especially during the crucial capture phase.”

“Industry is eager to participate,” says Luisa Innocenti, heading Clean Space. “The mission should be a spectacular showcase for the capabilities of Europe’s space businesses.

“The industry consensus is that a new class of ‘space tugs’ will arise to offer various services such as in-orbit servicing or refuelling.

“The technologies such spacecraft will require overlap with those being developed for e.Deorbit – so it will be the first of the space tugs, demonstrating its performance with an unprecedented achievement.

“After this Ministerial, we propose to finalise the design and realistically test key technologies – including weightless net testing on a suborbital rocket – to be ready to build after final approval from the next Ministerial, for a planned launch in April 2023.”

What is Clean Space?: http://www.esa.int/Our_Activities/Space_Engineering/Clean_Space/What_is_Clean_Space

Why is it needed?: http://www.esa.int/Our_Activities/Space_Engineering/Clean_Space/Why_is_it_needed

What are its objectives?: http://www.esa.int/Our_Activities/Space_Engineering/Clean_Space/What_are_its_objectives

Q & A on Clean Space: http://www.esa.int/Our_Activities/Space_Engineering/Clean_Space/Q_A_on_Clean_Space