A slow-moving line of heavy thunderstorms dumped as much as 6 to 7 inches of rain in about two hours' time during the evening of Saturday, July 30, over parts of Howard County in central Maryland, resulting in severe local flash flooding. 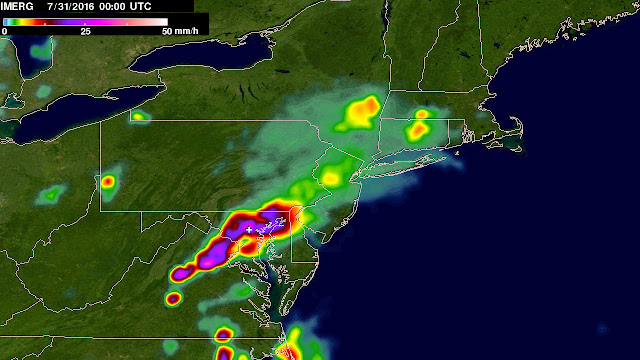 The hardest hit area was the historic town of Ellicott City, where two people were trapped in their cars and drowned. The town suffered substantial damage to many buildings, numerous cars were tossed about, and around 150 people had to be rescued from the downtown area. The heavy rains and flooding were a result of successive waves of rather slow moving storms that merged over the area. 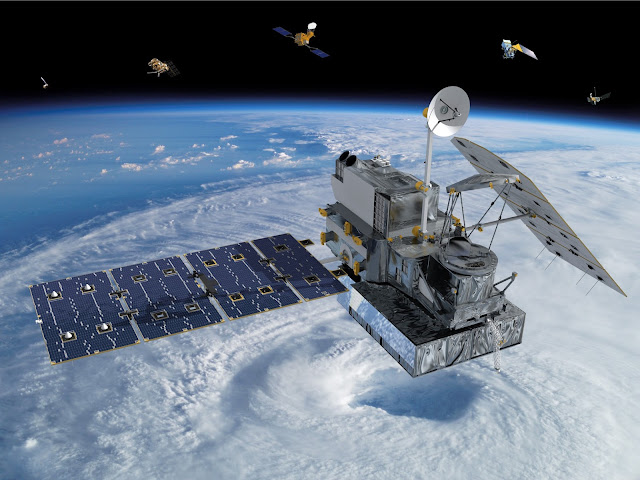 A warm, humid air mass, a stationary frontal boundary, and rather weak winds aloft set the stage for the slow-moving storms. Earlier in the afternoon, storms formed up and organized along the Appalachian Mountains before moving slowly out across the Piedmont. The Piedmont is a plateau area between the Atlantic coastal plain and the Appalachians.

This slow-moving line triggered new storms along its leading edge and was eventually overtaken by a second line of successive storms moving out from the Appalachians. The result was a mass of heavy raining thunderstorms across central Maryland that slowing moved eastward before weakening over the northern Chesapeake Bay. 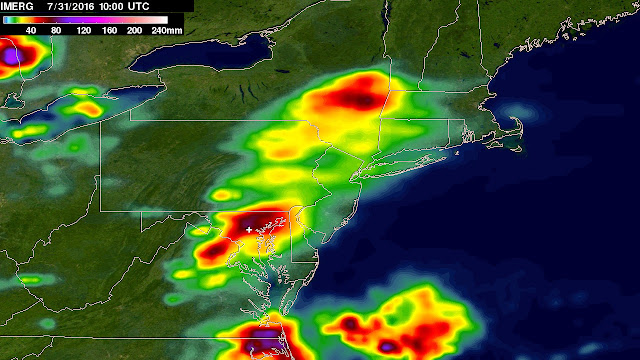 Image above: IMERG was also used to estimate rainfall totals for the period from July 30 at 4 p.m. EDT (8 p.m. UTC) to July 31 at 6 a.m. EDT (10 a.m. UTC). Rainfall totals across central Maryland were on the order of more than 70 mm (about 3 inches, shown in brown). The white crosses denote the location of Ellicott City, Maryland. Image Credits: NASA/JAXA/Hal Pierce.

NASA's Integrated Multi-satellite Retrievals for GPM, or IMERG, is used to make estimates of precipitation from a combination of passive microwave sensors, including the GMI microwave sensor on board the GPM, or Global Precipitation Measurement, mission satellite, and geostationary IR (infrared) data. These data were used to create images and animations at NASA's Goddard Space Flight Center in Greenbelt, Maryland. GPM is a joint mission between NASA and the Japan Aerospace Exploration Agency.

One image created showed instantaneous IMERG-estimated rainfall rates at 8 p.m. EDT on July 30 (12 a.m. UTC on July 31), 2016. IMERG showed a strong band of heavy rain extending east-west over north-central Maryland extending southwestward into northern Virginia. Within this band, rain rates are generally on the order of an inch per hour with localized areas of higher rates. 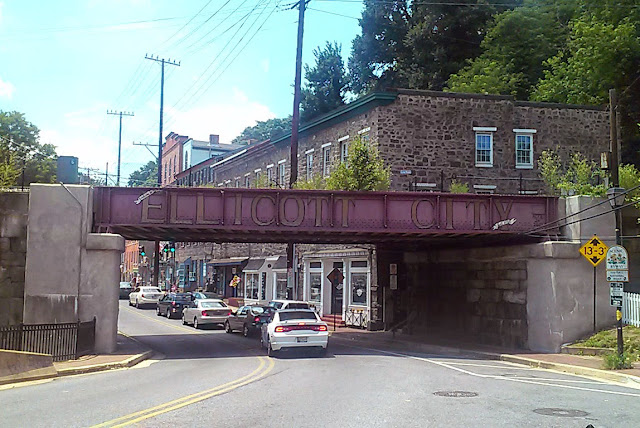 On Aug. 1, 2016, because of the severity of the flooding, Howard County Maryland Executive Allan H. Kittleman signed an executive order closing a portion of Ellicott City to all but emergency vehicle and pedestrian traffic. For updated information from Howard County, visit: https://www.howardcountymd.gov/.