Hurricane forecasters use many different types of data to forecast a storm’s intensity and track. NASA satellites and airborne instruments, including several developed and operated by NASA’s Jet Propulsion Laboratory, Pasadena, California, contribute to scientists’ understanding of tropical cyclones and help improve forecasts.

Here are some of the latest data on Hurricane Matthew from JPL-developed satellites and instruments: 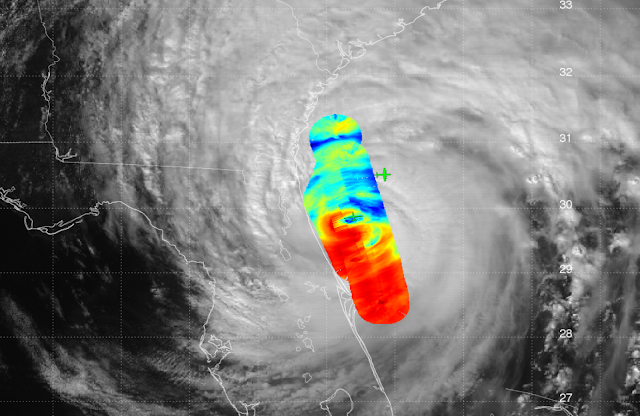 A hurricane is like an engine: the more it revs up, the warmer it gets. A JPL-developed microwave sounder called the High-Altitude Monolithic Microwave Integrated Circuit Sounding Radiometer (HAMSR) can measure a hurricane’s atmospheric temperature and humidity, even in the presence of clouds, and can also be used to measure rain and ice from Earth’s surface to the top of the storm’s convective clouds.

HAMSR has been flying repeatedly over Hurricane Matthew aboard a NASA Global Hawk unmanned aircraft as part of the National Oceanic and Atmospheric Administration’s Sensing Hazards with Operational Unmanned Technology (SHOUT) field campaign.

The image montage shows observations from HAMSR as it crisscrossed above Matthew at an altitude of about 55,000 feet (16,764 meters) in the early morning hours of Oct. 7, as the storm was approaching Florida’s east coast. The “swaths” are about 30 miles (48 kilometers) wide. The large image at right shows the temperature of the upper atmosphere above Matthew’s core. The temperature is proportional to the storm’s intensity -- the higher the temperature over the core relative to the environment, the more intense the storm. The HAMSR data are overlaid atop a ground-based radar image and satellite visible image. Red colors (warm) depict areas without clouds, while blue colors (very cold) represent scattering due to ice in the atmosphere and heavy precipitation. The image in the lower left shows the HAMSR data alone. The image in the upper left was taken by a camera aboard the Global Hawk.

As the Global Hawk prepared to return home to NASA’s Armstrong Flight Research Center in Edwards, California, it captured one last look inside Matthew’s spiral cloud bands. The red colors show cloud bands without precipitation, while blue colors show rain bands. The Global Hawk’s location is just past the eye (the red circle in the center of the image).

The HAMSR data were transmitted in real time via a communications satellite to the ground, where they were immediately processed and shared with the SHOUT scientists, who use them for situational awareness. They were also posted on a public web server. Images and data were also shared with forecasters at the NOAA/National Weather Service’s National Hurricane Center.

HAMSR was developed at JPL as part of NASA’s technology development program. For more on HAMSR, visit: http://microwavescience.jpl.nasa.gov/instruments/hamsr/

CloudSat
Taking a 3D Slice of the Storm 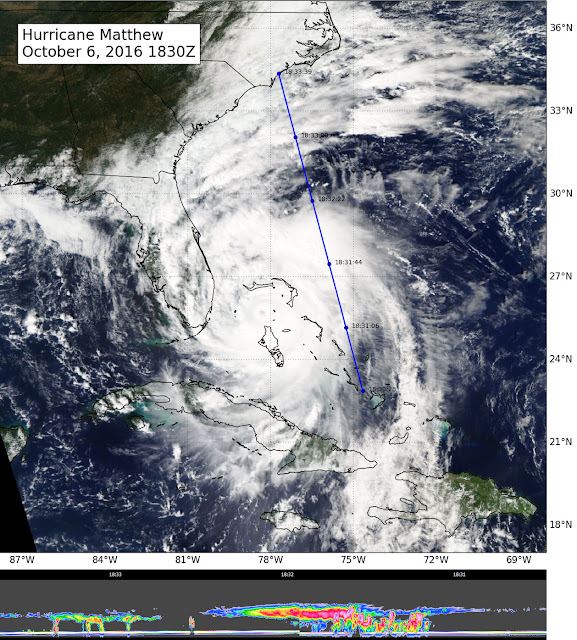 NASA’s CloudSat satellite flew to the east of the center of Hurricane Matthew on Oct. 6 at 11:30 a.m. PDT (2:30 p.m. EDT and 18:30 UTC), intersecting portions of Matthew’s outer rain bands. Although the overpass did not directly intersect the storm center, CloudSat data reveal Matthew’s anvil clouds (thick cirrus cloud cover), with cumulus and cumulonimbus clouds visible beneath the cirrus. Red and pink colors in the CloudSat overpass indicate areas of higher reflectivity (larger water and/or ice droplets) throughout the clouds.

For more on CloudSat, visit: http://cloudsat.atmos.colostate.edu/home 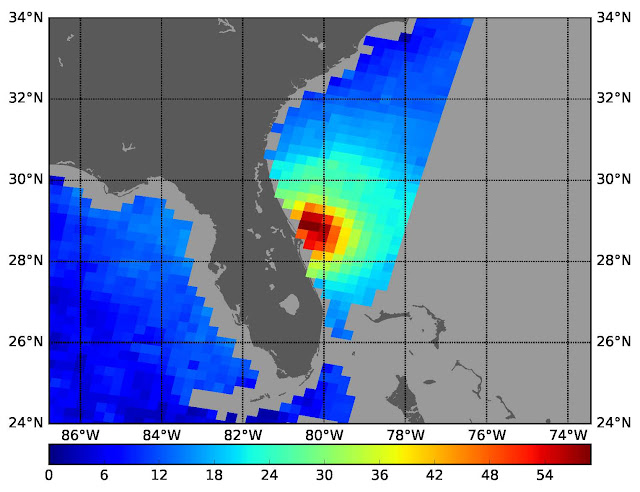 The radiometer instrument on NASA’s Soil Moisture Active Passive (SMAP) satellite can measure a hurricane’s wind speeds. SMAP observations of Hurricane Matthew, taken at 4:52 a.m. PDT (7:52 a.m. EDT and 11:52 UTC) on Oct 7, found wind speeds up to 132 mph (59 meters per second). SMAP has excellent sensitivity to extreme winds, far beyond that of typical scatterometer instruments now in orbit. This is because SMAP’s L-band is not affected by rain and can provide accurate wind speeds regardless of rain conditions. 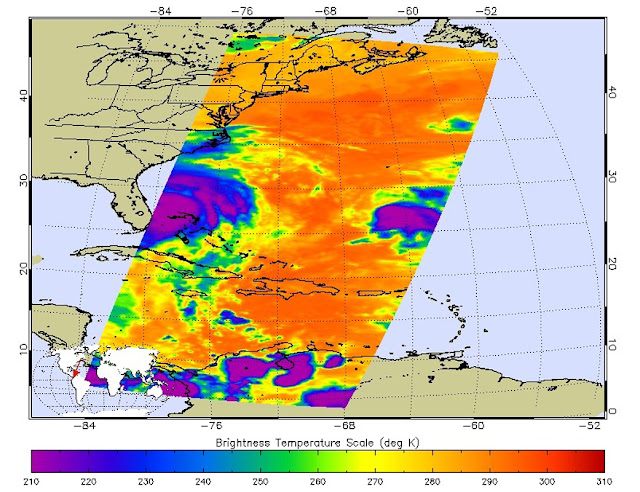 Image above: At 11:29 p.m. PDT on Oct. 6 (2:29 a.m. EDT on Oct. 7), NASA’s Atmospheric Infrared Sounder (AIRS) instrument on NASA’s Aqua satellite produced this false-color infrared image of Matthew as the storm moved up Florida’s central coast. The image shows the temperature of Matthew’s cloud tops or the surface of Earth in cloud-free regions, with the most intense thunderstorms shown in purples and blues. Image Credits: NASA/JPL-Caltech.

At 11:29 p.m. PDT on Oct. 6 (2:29 a.m. EDT and 6:29 UTC on Oct. 7), NASA’s Atmospheric Infrared Sounder (AIRS) instrument aboard NASA’s Aqua satellite produced this false-color infrared image of Matthew as the storm moved up the coast of central Florida. Hurricane Nicole is visible to the right in the Atlantic.

The AIRS data create an accurate 3-D map of atmospheric temperature, water vapor and clouds, data that are useful to forecasters. The image shows the temperature of Matthew’s cloud tops or the surface of Earth in cloud-free regions. The coldest cloud-top temperatures appear in purple, indicating towering cold clouds and heavy precipitation. The infrared signal of AIRS does not penetrate through clouds. Where there are no clouds, AIRS reads the infrared signal from the surface of the ocean waters, revealing warmer temperatures in orange and red.