On Oct. 19, 2016, operators instructed NASA’s Solar Dynamics Observatory, or SDO, to look up and down and then side to side over the course of six hours, as if tracing a great plus sign in space. During this time, SDO produced some unusual data. Taken every 12 seconds, SDO images show the sun dodging in and out of the frame. SDO captured these images in extreme ultraviolet light, a type of light that is invisible to our eyes. Here, they are colorized in red.

Animation above: Images from NASA’s SDO during a routine EVE cruciform maneuver show the sun dodging in and out of the frame. Animation (images) Credits: NASA’s Goddard Space Flight Center/SDO/Joy Ng.

SDO operators schedule this maneuver, one of a series of maneuvers that SDO completed on Oct. 27, 2016, twice a year to calibrate the spacecraft’s instruments. Veering motions allow scientists to assess how light travels through SDO’s instruments – whether light is reflected inside the instrument, for example – and how these instruments are changing over time. 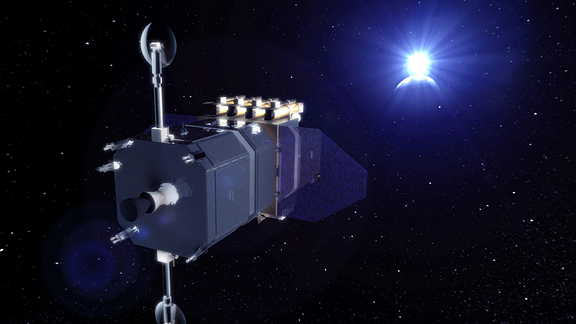 This particular maneuver is the EVE cruciform maneuver, designed to help SDO’s Extreme ultraviolet Variability Experiment, or EVE, take accurate measurements of the sun’s extreme UV emissions. EVE studies these emissions over time, so that we may better understand their role in influencing Earth’s climate and local space environment.