For a mid-afternoon snack, NASA astronaut Shane Kimbrough cut some of the "Outredgeous" Red Romaine lettuce leaves he nurtured during the past month aboard the International Space Station as part of a gardening harvest technique termed “cut-and-come-again.”

Kimbrough initiated the most recent round of the Veggie experiment on Oct. 25, and for the first time in space, all six lettuce plants are growing simultaneously. Kimbrough has taken on the part-time role of on-orbit gardener, working virtually autonomously to cultivate the crops, although gardeners on the ground at Kennedy Space Center provided help in the beginning. 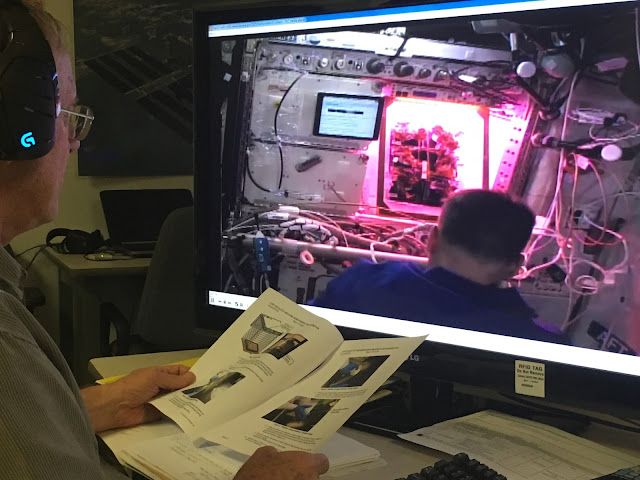 Image above: Charles Spern, a Veggie project engineer with the Engineering Services Contract, relays messages from the Kennedy Space Center Veggie team to assist the crew during the harvest. Image Credit: NASA.

“During their first week of life, the small seedlings were getting too much water,” said Veggie Project Manager Nicole Dufour. “This put the plants’ growth a bit behind schedule, but they recovered nicely after we instructed Kimbrough to use a fan to dry up some of the moisture.”

Cut-and-come-again is a repetitive harvest technique in which a selection of leaves can be harvested for a bit of fresh lettuce and possibly science samples. The remaining leaves and the core of the plant are left intact and will continue to grow and produce more leaves for subsequent harvests approximately every 10 days. The goal is to increase the on-orbit crop yield, as well as allow for more opportunities to supplement astronaut diets with fresh, nutritious food.

“Testing this method on-orbit, after using it on the ground, is very exciting for us,” said Dufour. “A repetitive harvest allows us to provide more food for both the crew and for science, so it’s a win-win. We are looking forward to hearing how Shane enjoys his first harvest!” 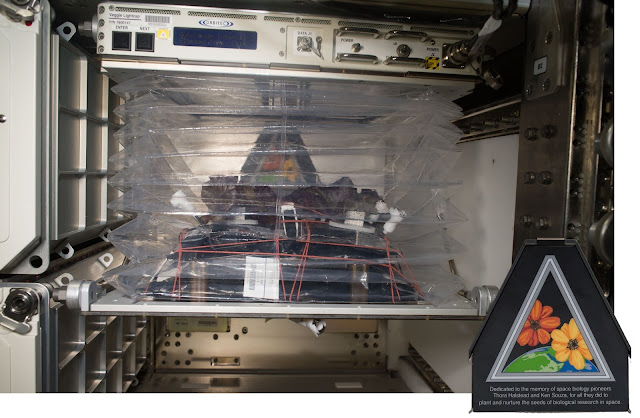 Image above: Six lettuce plants grow aboard the International Space Station as part of the Veg-03 experiment. At the rear of the chamber, a triangle plaque that crew members mounted this summer is visible. The plaque honors the memory and contributions of Thora Halstead and Ken Souza — both giants in the field of Space Biology, and reads: "Dedicated to the memory of space biology pioneers Thora Halstead and Ken Souza, for all they did to plant and nurture the seeds of biological research in space." Halstead conceived of and implemented the NASA Small Payload Program for Life Science through her innovative use of the mid-deck lockers in the space shuttle. She nurtured the program through its early years in the ‘80s and was a founding member of the American Society for Gravitational and Space Research (ASGSR), America’s premier society for space research in the life and physical sciences. Souza was also a founding member of ASGSR, and made numerous contributions to the field of Space Biology during his nearly 50 years with NASA. He was the principal investigator in the first demonstration of successful reproduction of a vertebrate animal (frogs) in space. Souza also had numerous programmatic contributions to the field of Space Biology during his tenure at both Ames Research Center and NASA Headquarters. Both Halstead’s and Souza’s early stewardship of a new science that became the discipline of space biology will continue to benefit future explorers on the journey to Mars. Image Credit: NASA.

Today’s harvest will be solely for crew consumption, and the plan is to have four harvests in total, with the final harvest targeted for the first of the new year. The yields from these harvests will be split between samples for science return and crew consumption.

This experiment also is an important demonstration of how NASA applies science across disciplines — in this case Space Biology to grow a healthy crop and Human Research to ensure astronauts remain healthy — to enable human space exploration. NASA’s Space Life and Physical Sciences Research and Applications division integrates and funds such research.