A mission to examine the habitability of Jupiter's ocean-bearing moon Europa is taking one step closer to the launchpad, with the recent completion of a major NASA review.

A highlight of Phase A was the selection and accommodation of 10 instruments being developed to study the scientific mysteries of Europa. The new mission phase is planned to continue through September 2018, and will result in the completion of a preliminary design for the mission's systems and subsystems. Some testing of spacecraft components, including solar cells and science instrument detectors, has already been underway during Phase A, and this work is planned to continue into Phase B. 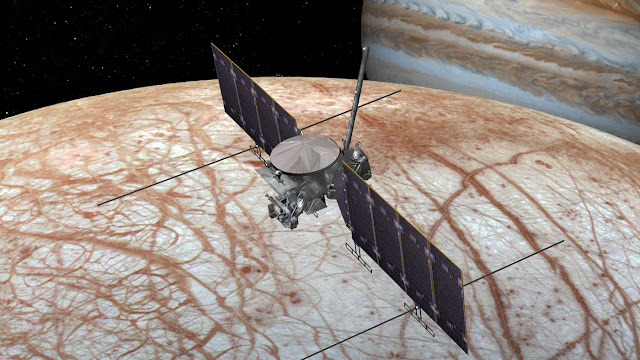 Image above: This artist's rendering shows NASA's Europa mission spacecraft, which is being developed for a launch sometime in the 2020s. Image credits: NASA/JPL-Caltech.

In addition, during Phase B subsystem vendors will be selected, as well as prototype hardware elements for the science instruments. Spacecraft subassemblies will be built and tested as well.

The Europa mission spacecraft is being planned for launch in the 2020s, arriving in the Jupiter system after a journey of several years. The spacecraft would orbit Jupiter as frequently as every two weeks, providing many opportunities for close flybys of Europa. The mission plan includes 40 to 45 flybys in the prime mission, during which the spacecraft would image the moon's icy surface at high resolution and investigate its composition and the structure of its interior and icy shell.

The life cycle of a NASA science mission includes several key phases. At each step, missions must successfully demonstrate that they have met the agency's requirements in order to indicate readiness to move forward into the next phase. Phase B includes preliminary design work, while phases C and D include final design, spacecraft fabrication, assembly and testing, and launch.

For more information about NASA's mission to Europa, visit: http://www.nasa.gov/europa