After nearly 13 years in orbit around Saturn, the international Cassini–Huygens mission is about to begin its final chapter: the spacecraft will perform a series of daring dives between the planet and its rings, leading to a dramatic final plunge into Saturn's atmosphere on 15 September.

The manoeuvre put the spacecraft onto its ’grand finale’ trajectory: a series of 22 orbits, each lasting about a week, drawing closer to Saturn and passing between the planet's innermost rings and its outer atmosphere. The first crossing of the ring plane will occur on 26 April.

With the repeated dives in this yet unvisited region, the mission will conclude its journey of exploration by collecting unprecedented data to address fundamental questions about the origin of Saturn and its ring system.

Launched in 1997, the Cassini-Huygens spacecraft embarked on a seven-year voyage across the Solar System, eventually reaching Saturn in July 2004. Several months later, the Cassini orbiter released ESA’s Huygens probe, which landed on Titan on 14 January 2005 – the first landing in the outer Solar System.

The mission has greatly contributed to our understanding of the Saturnian environment, including the giant planet’s system of rings and moons. 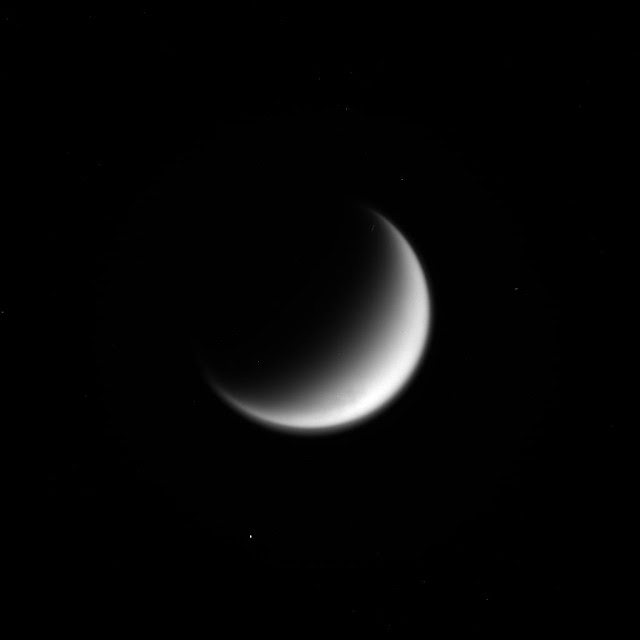 Combining the data collected in situ by Huygens and the observations performed by Cassini during flybys of Titan, the mission revealed the atmospheric processes of this moon and their seasonal evolution, as well as the surface morphology and interior structure, which may include a liquid water ocean.

Enshrouded by a thick nitrogen-dominated atmosphere and partly covered by lakes and rivers, Titan has a weather and hydrological cycle that bears some interesting similarities to Earth. However, there are important differences: the key component there is not water, like on our planet, but methane, and the temperature is very low, around –180°C at the surface.

Over its 13-year mission, Cassini will have covered about half of Saturn’s orbit, in which the planet takes 29 years to circle the Sun. This means that the spacecraft has monitored two seasons on Titan, an object that can teach us much on the past and the future of Earth.

Another of Cassini's breakthroughs was the detection of a towering plume of water vapour and organic material spraying into space from warm fractures near the south pole of Saturn's icy moon, Enceladus. These salt-rich jets indicate that an underground sea of liquid water is lurking only a few kilometres below the moon's icy surface, as confirmed by gravity and rotation measurements. 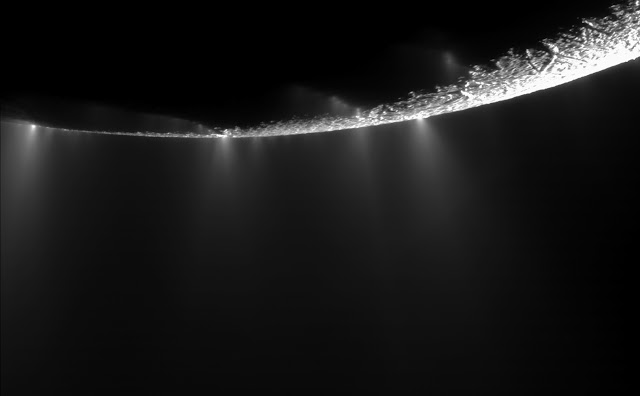 A recent analysis of data collected during flybys of Enceladus with the Cassini Ion Neutral Mass Spectrometer also revealed hydrogen gas in the plume, suggesting that rock might be reacting with warm water on the seafloor of the moon's subsurface ocean. This hydrothermal activity could provide a chemical energy source for life, enabling non-photosynthetic biological processes similar to the ones found near the hydrothermal vents on the Earth’s ocean floor and pointing to the potential habitability of Enceladus' underground ocean.

Following over a decade of ground-breaking discoveries, Cassini is now approaching its end. With little fuel left to correct the spacecraft trajectory, it has been decided to end the mission by plunging it into Saturn’s atmosphere on 15 September 2017. In the process, Cassini will burn up, satisfying planetary protection requirements to avoid possible contamination of any moons of Saturn that could have conditions suitable for life.

The grand finale is not only a spectacular way to complete this extraordinary mission, but will also return a bounty of unique scientific data that was not possible to collect during the previous phases of the mission. Cassini has never ventured into the area between Saturn and its rings before, so the new set of orbits is almost like a whole new mission.

These close orbits will be inclined 63 degrees with respect to Saturn's equator and will provide the highest resolution observations ever achieved of the inner rings and the planet's clouds. The orbits will also give the chance to examine in situ the material in the rings and plasma environment of Saturn. 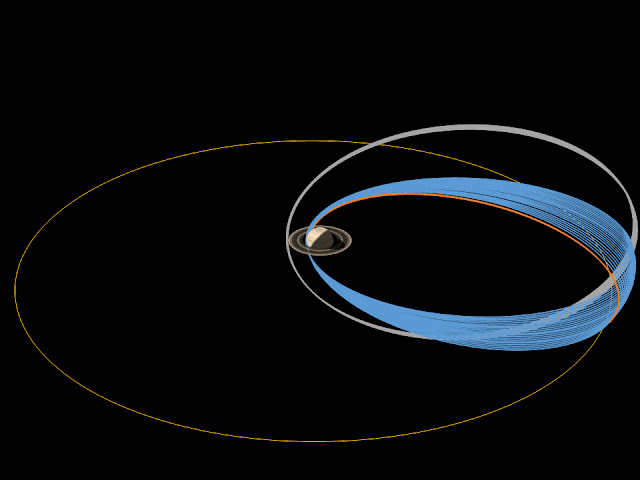 With its radio science investigation, Cassini will measure Saturn's gravitational field as close as 3000 km from Saturn's upper cloud layers, greatly improving the current models of the planet's internal structure and winds in its atmosphere. Scientists expect the new data will also allow them to disentangle the gravity of the planet from the tiny pull exerted on the spacecraft by the rings, estimating the total mass of the rings to unprecedented accuracy. ESA ground stations in Argentina and Australia will help receive Cassini's radio science data, providing a series of 22 tracking passes during the grand finale. 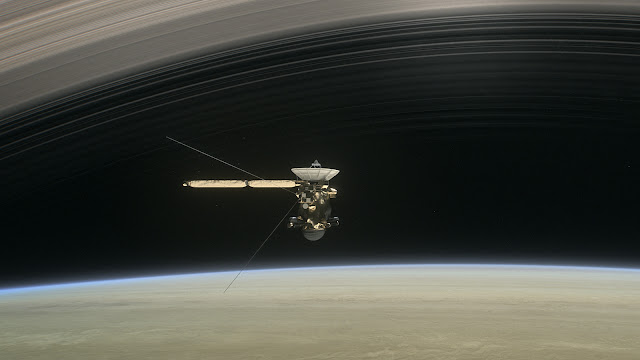 Cassini between Saturn and the rings

While crossing the ring plane, Cassini's Cosmic Dust Analyzer will directly sample the composition of dust particles from different parts of the ring system, whereas the Ion Neutral Mass Spectrometer will sniff the upper atmosphere layers of Saturn to analyse molecules escaping from the atmosphere as well as water-based molecules that originate from the rings.

“At last, we have now reached the final and most audacious phase of this pioneering mission, pushing the spacecraft once again into unexplored territory,” says Nicolas Altobelli, ESA Cassini project scientist.

“We are looking forward to the flow of exciting new data that Cassini will send back in the coming months.”

Cassini–Huygens is a cooperative project of NASA, ESA and ASI, the Italian space agency.