During April 2017 Jupiter is in opposition: it is at its closest to Earth and the hemisphere facing Earth is fully illuminated by the Sun. The NASA/ESA Hubble Space Telescope used this special configuration to capture an image of what is by far the largest planet in the Solar System. This image adds to many others made in the past, and together they allow astronomers to study changes in the atmosphere of the gas giant.

On 7 April Jupiter will come into opposition, the point at which the planet is located directly opposite the Sun in the sky. This means that the Sun, Earth and Jupiter line up, with Earth sitting in between the Sun and the gas giant.

Opposition also marks the planet’s closest approach to Earth — about 670 million kilometres — so that Jupiter appears brighter in the night sky than at any other time in the year. This event allows astronomers using telescopes in space and on the ground to see more detail in the atmosphere of Jupiter. 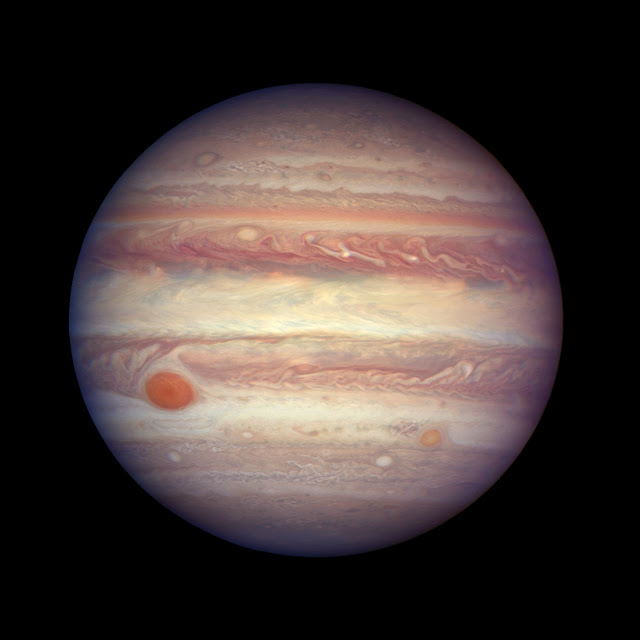 On 3 April Hubble took advantage of this favourable alignment and turned its sharp eye towards Jupiter to add to the collection of images of our massive neighbour. Hubble observed Jupiter using its Wide Field Camera 3 (WFC3), which allows observations in ultraviolet, visible and infrared light. The final image shows a sharp view of Jupiter and reveals a wealth of features in its dense atmosphere. As it is so close, Hubble can resolve features as small as about 130 kilometres across.

The surface of Jupiter is divided into several distinct, colourful bands, running parallel to the equator. These bands are created by differences in the opacity of the clouds which have varying quantities of frozen ammonia in them; the lighter bands have higher concentrations than the darker bands. The differing concentrations are kept separate by fast winds which can reach speeds of up to 650 kilometres per hour.

The most recognisable feature on Jupiter is the huge anticyclonic storm, called the Great Red Spot — this storm is large enough to engulf a whole Earth-sized planet at once. However, as with the last images of Jupiter taken by Hubble and telescopes on the ground, this new image confirms that the huge storm which has raged on Jupiter’s surface for at least 150 years continues to shrink. The reason for this is still unknown. So Hubble will continue to observe Jupiter in the hope that scientists will solve this stormy riddle.

Next to the famous Great Red Spot a much smaller storm can be seen at farther southern latitudes. Because of its similar appearance but much smaller size it was dubbed “Red Spot Junior”.

The observations of Jupiter form part of the Outer Planet Atmospheres Legacy (OPAL) programme, which allows Hubble to dedicate time each year to observing the outer planets. This way scientists have access to a collection of maps, which helps them to understand not only the atmospheres of the giant planets in the Solar System, but also the atmospheres of our own planet and of the planets that are being discovered around other stars. The programme began in 2014 with Uranus, and has been studying Jupiter and Neptune since 2015. In 2018, it will begin viewing Saturn.