You can’t see them, but swarms of electrons are buzzing through the magnetic environment — the magnetosphere — around Earth. The electrons spiral and dive around the planet in a complex dance dictated by the magnetic and electric fields. When they penetrate into the magnetosphere close enough to Earth, the high-energy electrons can damage satellites in orbit and trigger auroras. Scientists with NASA’s Magnetospheric Multiscale, or MMS, mission study the electrons’ dynamics to better understand their behavior. A new study, published in Journal of Geophysical Research revealed a bizarre new type of motion exhibited by these electrons.

Electrons in a strong magnetic field usually exhibit a simple behavior: They spin tight spirals along the magnetic field. In a weaker field region, where the direction of the magnetic field reverses, the electrons go free style — bouncing and wagging back and forth in a type of movement called Speiser motion. New MMS results show for the first time what happens in an intermediate strength field. Then these electrons dance a hybrid, meandering motion — spiraling and bouncing about before being ejected from the region. This motion takes away some of the field’s energy and it plays a key role in magnetic reconnection, a dynamic process, which can explosively release large amounts of stored magnetic energy.

Video above: With no guide field to confine them, electrons (yellow) wiggle back in forth. The electron’s increasing speed is shown by warmer color tracks. Video Credits: NASA’s Goddard Space Flight Center/Tom Bridgman.

“MMS is showing us the fascinating reality of magnetic reconnection happening out there,” said Li-Jen Chen, lead author of the study and MMS scientist at NASA’s Goddard Space Flight Center in Greenbelt, Maryland.

As MMS flew around Earth, it passed through an area of a moderate strength magnetic field where electric currents run in the same direction as the magnetic field. Such areas are known as intermediate guide fields. While inside the region, the instruments recorded a curious interaction of electrons with the current sheet, the thin layer through which the current travels. As the incoming particles encountered the region, they started gyrating in spirals along the guide field, like they do in a strong magnetic field, but in larger spirals. The MMS observations also saw signatures of the particles gaining energy from the electric field. Before long, the accelerated particles escaped the current sheet, forming high-speed jets. In the process, they took away some of the field’s energy, causing it to gradually weaken.

Video above: In an intermediate strength magnetic guide field, the electrons spiral along the field, gaining energy until they are ejected from the reconnection layer. Video Credits: NASA's Goddard Space Flight Center/Tom Bridgman.

The magnetic field environment where the electrons’ motions were observed was uniquely created by magnetic reconnection, which caused the current sheet to be tightly confined by bunched-up magnetic fields. The new results help the scientists better understand the role of electrons in reconnection and how magnetic fields lose energy.

MMS measures the electric and magnetic fields it flies through, and counts electrons and ions to measure their energies and directions of motion. With four spacecraft flying in a compact, pyramid formation, MMS is able to see the fields and particles in three dimensions and look at small-scale particle dynamics, in a way never before achieved.

“The time resolution of MMS is one hundred times faster than previous missions,” said Tom Moore, senior project scientist for MMS at NASA’s Goddard Space Flight Center. “That means we can finally see what’s going on in such narrow layers and will be able to better predict how fast reconnection occurs in various circumstances.” 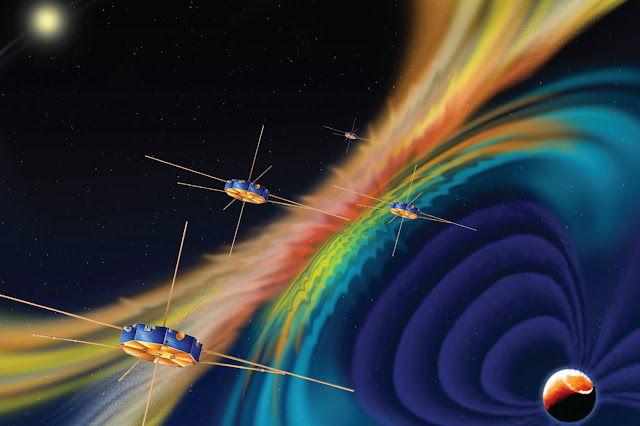 Understanding the speed of reconnection is essential for predicting the intensity of the explosive energy release. Reconnection is an important energy release process across the universe and is thought to be responsible for some shock waves and cosmic rays. Solar flares on the sun, which can trigger space weather, are also caused by magnetic reconnection.

With two years under its belt, MMS has been revealing new and surprising phenomena near Earth. These discoveries enable us to better understand Earth’s dynamic space environment and how it affects our satellites and technology.

MMS is now heading to a new orbit which will take it through magnetic reconnection areas on the side of Earth farther from the sun. In this region, the guide field is typically weaker, so MMS may see more of these types of electron dynamics.