The sun emitted two significant solar flares on the morning of Sept. 6, 2017. The first peaked at 5:10 a.m. EDT and the second, larger flare, peaked at 8:02 a.m. EDT. NASA’s Solar Dynamics Observatory, which watches the sun constantly, captured images of both events. Solar flares are powerful bursts of radiation. Harmful radiation from a flare cannot pass through Earth's atmosphere to physically affect humans on the ground, however — when intense enough — they can disturb the atmosphere in the layer where GPS and communications signals travel.

Animation above: This animation shows both the X2.2 and the X9.3 flares that the Sun emitted on Sept. 6, 2017. The imagery was captured by NASA's Solar Dynamics Observatory and shows light in the 131 angstrom wavelength. Animation Credits: NASA/Goddard/SDO.

The first flare is classified as an X2.2 flare and the second is an X9.3 flare. X-class denotes the most intense flares, while the number provides more information about its strength. An X2 is twice as intense as an X1, an X3 is three times as intense, etc. 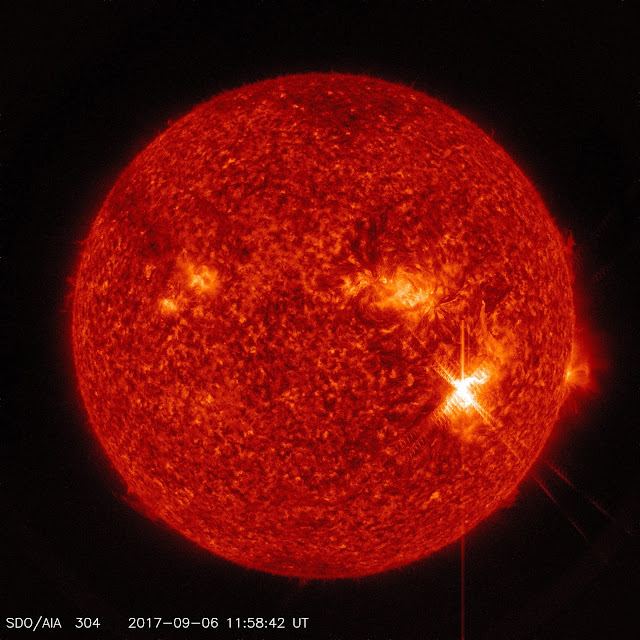 Image above: NASA's Solar Dynamics Observatory captured this image of a significant solar flare — as seen in the bright flash on the lower right on Sept. 6, 2017. The image shows a subset of extreme ultraviolet light that highlights the extremely hot material in flares and which is typically colorized in red. Image Credit: NASA/Goddard/SDO.

Both flares erupted from an active region labeled AR 2673, which also produced a mid-level solar flare on Sept. 4, 2017. The X9.3 flare was the largest flare so far in the current solar cycle, the approximately 11-year-cycle during which the sun’s activity waxes and wanes. The current solar cycle began in December 2008, and is now decreasing in intensity and heading toward solar minimum. This is a phase when such eruptions on the sun are increasingly rare, but history has shown that they can nonetheless be intense. The radio black out from this particular flare is already passed, and http://spaceweather.gov has more details.