For one day only LHC collides xenon beams 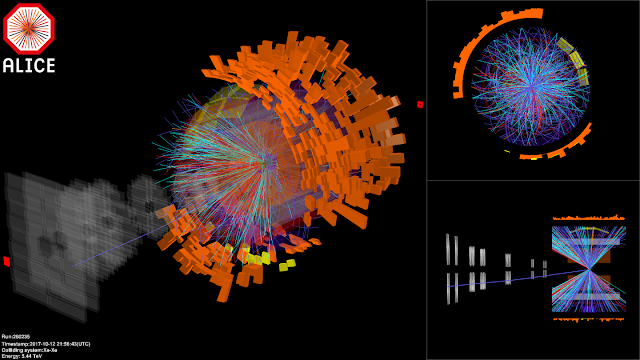 Image above: One of the xenon ion collisions recorded by the ALICE detector. (Image: ALICE/CERN).

Today, the LHC is getting a taste of something unusual. For eight hours, the Large Hadron Collider is accelerating and colliding xenon nuclei, allowing the large LHC experiments, ATLAS, ALICE, CMS and LHCb, to record xenon collisions for the first time.

Xenon is a noble gas, present in miniscule quantities in the atmosphere. Its atoms consist of 54 protons and between 70 and 80 neutrons, depending on the isotope. The xenon collisions in the LHC (of atoms with 54 protons and 75 neutrons) are therefore similar to the heavy-ion collisions that are regularly carried out at the LHC. Normally, lead nuclei, which have a much greater mass, are used. “But a run with xenon nuclei was planned for the NA61/SHINE fixed-target experiment at the SPS (Super Proton Synchrotron),” explains Reyes Alemany Fernandez, who is in charge of heavy-ion runs. “We are therefore taking the opportunity for a short run with xenon at the LHC.”

“It’s a unique opportunity both to explore the LHC’s capabilities with a new type of beam and to obtain new physics results,” says John Jowett, the physicist in charge of heavy-ion beams at the LHC.

And who knows? Maybe this unprecedented run will lead to some surprising discoveries. “The experiments will conduct the same kind of analyses with xenon ions as they do with lead ions, but, because the xenon nuclei have less mass, the geometry of the collision is different,” explains Jamie Boyd, LHC programme coordinator, who is responsible for liaison between the LHC machine and experiment teams. Heavy-ion collisions allow physicists to study quark-gluon plasma, a state of matter that is thought to have briefly existed just after the Big Bang. In this extremely dense and hot primordial soup, quarks and gluons moved around freely, without being confined by the strong force of protons and neutrons, as they are in our Universe today. 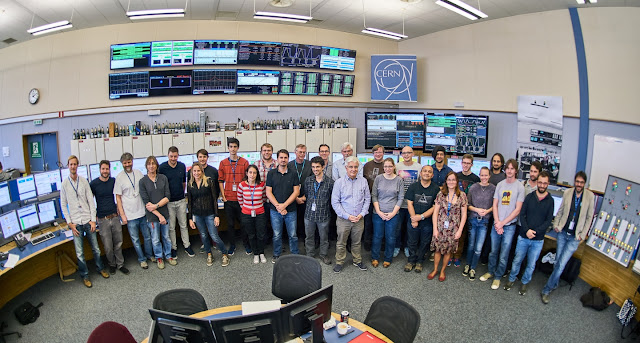 Image above: Some of the teams who contributed to the xenon run, in the CERN control centre. (Image: Jules Ordan/CERN).

Switching from protons to xenon isn’t a piece of cake, however. A team has been preparing the accelerator complex for the xenon run since the start of the year. Atoms of the gas are accelerated and stripped of their 54 electrons in four successive accelerators before being launched into the LHC. “The number of bunches and the revolution frequency varies a lot between protons and xenon nuclei,” explains Reyes Alemany Fernandez. “One of the difficulties is adjusting and synchronising the accelerators’ radiofrequency systems.” 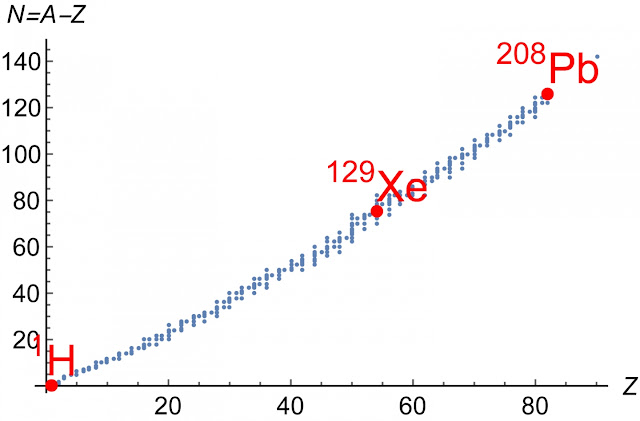 Graphic above: A chart showing different types of stable nuclei, with their atomic number, i.e. the number of protons, Z, shown on the horizontal axis and the number of neutrons, N, shown on the vertical axis. The three types already accelerated in the LHC, i.e. protons (hydrogen), lead nuclei and xenon nuclei, are shown in red with their mass number, A (N + Z).

After the xenon run in the LHC lasting a few hours, xenon nuclei will continue to circulate in the accelerator complex, but only as far as the SPS. For eight weeks, the SPS will supply xenon ions to the NA61/SHINE experiment, which is also studying quark-gluon plasma, but whose analyses will complement those carried out by the LHC experiments. More specifically, NA61/SHINE is interested in the deconfinement point, a collision-energy threshold above which the creation of quark-gluon plasma would be possible. NA61/SHINE is thus systematically testing many collision energies using ions of different masses. After lead, beryllium and argon, it’s now xenon’s turn to take the stage.