The key to monitoring Earth’s changing environment and to guaranteeing a consistent stream of satellite data to improve our daily lives is to take the same measurements over the course of decades. But how do you know that measurements from successive satellites, even though identical in build, are like for like?

The answer, for the Copernicus Sentinel-3 mission, is to engage in some nifty orbital flying. 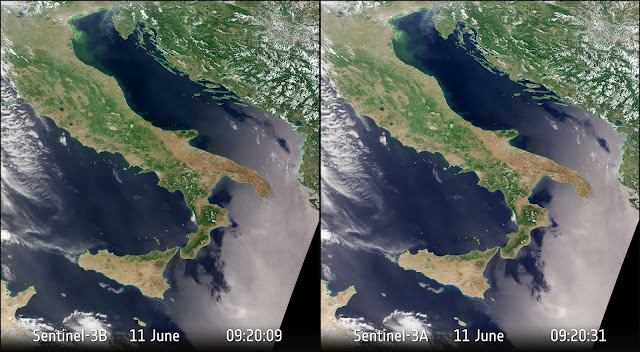 Sentinel-3 is a two-satellite mission to supply the coverage and data delivery needed for Europe’s Copernicus environmental monitoring programme.

Launched in 2016, Sentinel-3A has been measuring our oceans, land, ice and atmosphere to monitor and understand large-scale global dynamics and to provide critical information for marine operations, and more.

Its twin, Sentinel-3B, was launched in April 2018 and is having its instruments calibrated and being commissioned for service. Once Sentinel-3B is operational, the two satellites will orbit Earth 140° apart. 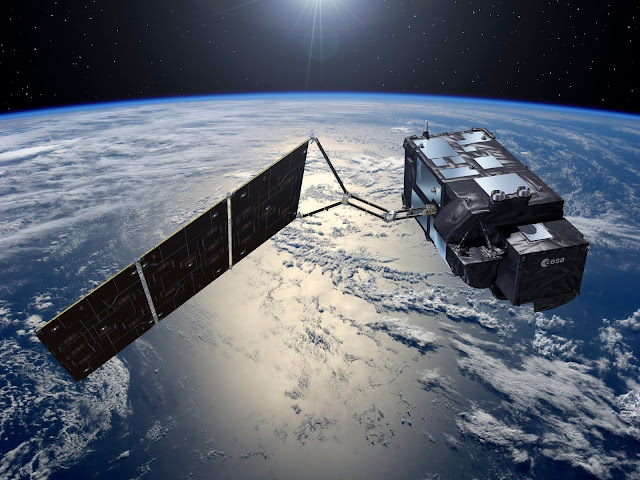 Now, however, the satellites have been positioned much closer together, flying a mere 30 seconds apart. Travelling at 7.4 km per second, the separation equates to a distance of 223 km.

The reason for this is to see how their instruments compare.

Even though the two Sentinel-3 satellites are identical, each carrying a radar altimeter, a radiometer and an imaging spectrometer, there’s a chance that their instruments could behave slightly differently.

It is important that any differences are carefully accounted for otherwise the information they deliver could be misinterpreted as changes happening on Earth’s surface.

Given the satellites’ current brief separation, their measurements should be virtually the same.

This tandem phase is also important for the future Sentinel-3 satellites.

ESA’s ocean scientist, Craig Donlon, explains, “Our Sentinel-3 ocean climate record will eventually be derived from four satellites because we will be launching two further Sentinel-3s in the future.

“We need to understand the small differences between each successive satellite instrument as these influence our ability to determine accurate climate trends.

“The four-month Sentinel-3 tandem phase is a fantastic opportunity to do this and will provide results so that climate scientists can use all Sentinel-3 data with confidence.”

ESA’s Sentinel-3 project manager, Bruno Berruti, said, “Following liftoff and the usual checks, the operations team has been expertly flying Sentinel-3B so that it gradually flies closer to Sentinel-3A.

“We recently reached the magic separation of 30 seconds and I am happy to say that we are now officially in the tandem phase.

“This will last around four months, after which the two satellites will be gently moved apart until they reach their operational separation of 140°. This is different to the other Sentinel missions, but for our mission it is better to measure ocean features such as eddies as accurately as possible.”

ESA’s Sentinel-3 mission manager, Susanne Mecklenburg, added, “So far, we are really happy with the results of the tandem phase. Measurements from the satellites’ instrument packages seem to be very much aligned, but we will be analysing the results very carefully over the next months to make sure we account for any minor differences.”