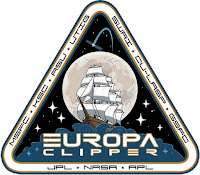 This animation demonstrates how deformation in the icy surface of Europa could transport subsurface ocean water to the moon’s surface.

This is just one of several simulated behaviors reported in a new study performed by scientists at NASA’s Jet Propulsion Laboratory. The study focused on linear features called “bands” and “groove lanes” found on Jupiter’s moons Europa and Ganymede. Scientists have used the same numerical model to solve mysteries about motion in Earth’s crust.

The animation is a two-dimensional simulation of a possible cross-section of a band running through Europa’s ice shell. At the extreme bottom is Europa’s ocean, and the thick white line across the top represents the moon’s surface ice. The midsection is the bulk of Europa’s ice shell, with warmer colors (red, orange, yellow) representing stronger, more rigid ice. Depth is marked on the left side of the animation while numbers on the bottom measure distance from the center of the band feature on Europa’s surface. Bands on Europa and Ganymede are typically tens of miles wide and hundreds of miles long. Numbers at the top mark the passage of time in thousands of years.

As the animation runs forward, the ice shell is deformed by gravitational interactions with Jupiter. The cold, brittle ice at the surface gets pulled apart. At the same time, faults in the upper ice form, heal, and re-form (visible as diagonal yellow, green and blue lines in the upper center of the animation). The churning material that quickly fills the bottom half of the view is a collection of tiny white dots representing bits of Europa’s ocean that have been frozen into the bottom of Europa’s ice shell (i.e. where the liquid ocean is in contact with the frozen shell). 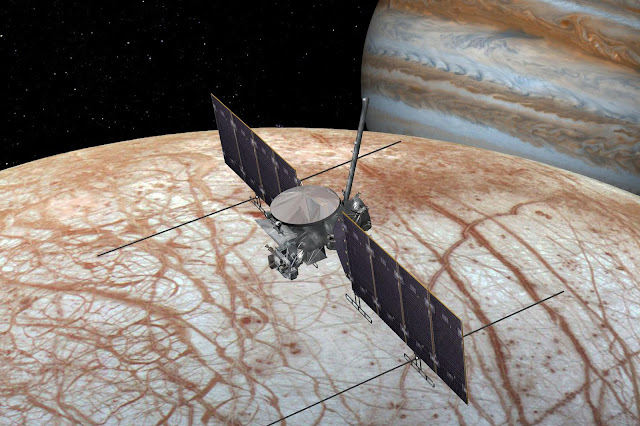 Image above: Artist's illustration of the Europa Clipper, a NASA spacecraft that will study Jupiter's ocean-harboring moon Europa during dozens of flybys. Image Credit: NASA.

In the paper, the scientists describe it as “fossil” ocean material because the bits of ocean trapped in Europa’s ice shell spend many hundreds of thousands, if not millions, of years being carried to the surface. In other words, by the time the ocean material reaches Europa’s surface where it can be analyzed by a passing spacecraft, it no longer serves as a sample of Europa’s ocean as it is in the present. Instead, the spacecraft would actually be studying Europa’s ocean as it was a million or more years ago. Hence, it is fossil ocean material.

NASA’s Europa Clipper spacecraft is intended to launch in the early 2020s. The spacecraft will then orbit Jupiter and become the first spacecraft to study Europa exclusively, including the composition of the moon’s surface material. The mission will likely be able to test the model simulated above by using ice-penetrating radar to probe the moon’s bands. If Europa indeed behaves the way the simulation suggests, it might carry ocean material to the moon’s surface, where Europa Clipper would analyze it remotely using the spacecraft’s infrared and ultraviolet instruments, among others. Scientists could then study the material’s composition to consider whether Europa’s ocean might be hospitable for some form of life.