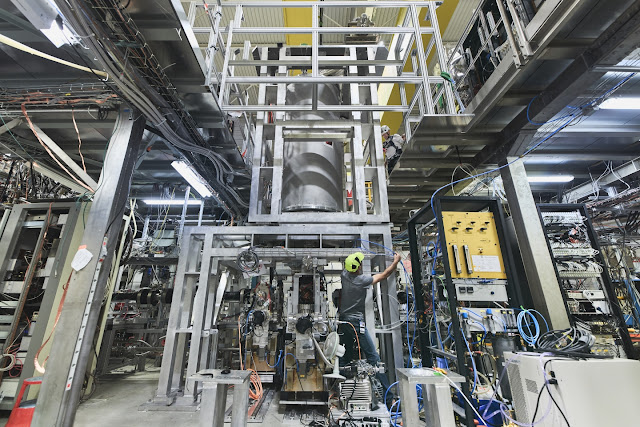 We learn it at high school: release two objects of different mass in the absence of friction forces and they fall down at the same rate in Earth’s gravity. What we haven’t learned, because it hasn’t been directly measured in experiments, is whether antimatter falls down at the same rate as ordinary matter or if it might behave differently. Two new experiments at CERN, ALPHA-g and GBAR, have now started their journey towards answering this question.

ALPHA-g is very similar to the ALPHA experiment, which makes neutral antihydrogen atoms by taking antiprotons from the Antiproton Decelerator (AD) and binding them with positrons from a sodium-22 source. ALPHA then confines the resulting neutral antihydrogen atoms in a magnetic trap and shines laser light or microwaves onto them to measure their internal structure. The ALPHA-g experiment has the same type of apparatus for making and trapping antiatoms, except that it is oriented vertically. With this vertical set-up, researchers can precisely measure the vertical positions at which the antihydrogen atoms annihilate with normal matter once they switch off the trap’s magnetic field and the atoms are under the sole influence of gravity. The values of these positions will allow them to measure the effect of gravity on the antiatoms.

The GBAR experiment, also located in the AD hall, takes a different tack. It plans to use antiprotons supplied by the ELENA deceleration ring and positrons produced by a small linear accelerator to make antihydrogen ions, consisting of one antiproton and two positrons. Next, after trapping the antihydrogen ions and chilling them to an ultralow temperature (about 10 microkelvin), it will use laser light to strip them of one positron, turning them into neutral antiatoms. At this point, the neutral antiatoms will be released from the trap and allowed to fall from a height of 20 centimetres, during which the researchers will monitor their behaviour.

After months of round-the-clock work by researchers and engineers to put together the experiments, ALPHA-g and GBAR have received the first beams of antiprotons, marking the beginning of both experiments. ALPHA-g began taking beam on 30 October, after receiving the necessary safety approvals. ELENA sent its first beam to GBAR on 20 July, and since then the decelerator and GBAR researchers have been trying to perfect the delivery of the beam. The ALPHA-g and GBAR teams are now racing to commission their experiments before CERN’s accelerators shut down in a few weeks for a two-year period of maintenance work. Jeffrey Hangst, spokesperson of the ALPHA experiments, says: “We are hoping that we’ll get the chance to make the first gravity measurements with antimatter, but it’s a race against time”. Patrice Pérez, spokesperson of GBAR, says: “The GBAR experiment is using an entirely new apparatus and an antiproton beam still in its commissioning phase. We hope to produce antihydrogen this year and are working towards being ready to measure the gravitational effects on antimatter when the antiprotons are back in 2021”.


Introducing ALPHA-g, a new experiment to measure the effect of gravity on antimatter

Video above: Jeffrey Hangst at the Antiproton Decelerator hall, explaining the ALPHA-g set-up in the run-up to the start of the experiment. (Video: Jacques Fichet/CERN).

Another experiment at the AD hall, AEgIS, which has been in operation for several years, is also working towards measuring the effect of gravity on antihydrogen using yet another approach. Like GBAR, AEgIS is also hoping to produce its first antihydrogen atoms this year.

Discovering any difference between the behaviour of antimatter and matter in connection with gravity could point to a quantum theory of gravity and perhaps cast light on why the universe seems to be made of matter rather than antimatter.

Chasing a particle that is its own antiparticle:
https://orbiterchspacenews.blogspot.com/2018/11/chasing-particle-that-is-its-own.html