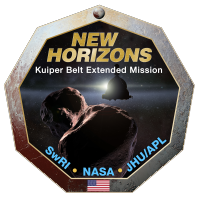 Years before a team of researchers proposed a mission called New Horizons to explore the dwarf planet Pluto, NASA's Hubble Space Telescope had already made initial observations of the world at the dim outer fringes of our celestial neighborhood. Over many years, Hubble's pioneering observations repeatedly accomplished what ground-based telescopes could not — imaging features on Pluto's surface, finding new Plutonian moons, and tracking down a destination to visit after Pluto — an even tinier, icy object in a vast region of small worlds beyond the orbit of Neptune called the Kuiper Belt. 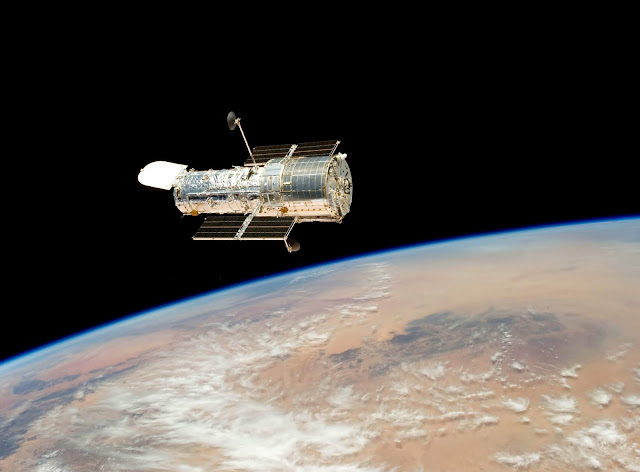 Image above: NASA's Hubble Space Telescope has explored the universe since the early 1990s, gathering visible, near-ultraviolet, and near-infrared imagery and spectra. From its location in space, the telescope avoids the distortion produced by Earth's atmosphere, enabling it to take images in higher resolutions at greater distances than possible with ground-based telescopes. Image Credit: NASA.

Thus began a decades-long relationship between Hubble and NASA's New Horizons mission: A legendary space-based telescope and a pioneering space probe hurtling through space at about 32,000 miles (51,500 kilometers) per hour.

In 1990, Hubble produced the first image that illuminated Pluto and its large moon Charon. After Hubble's optical repair in 1993, scientists captured even sharper images. New Horizons Principal Investigator Alan Stern of the Southwest Research Institute in Boulder, Colorado, led the imaging projects while co-investigator Marc Buie, now at SwRI Boulder but then at Lowell Observatory where Pluto was discovered, led the data analysis.

"We got eight pixels of Pluto in 1994. Each pixel represented more than 150 square miles of Pluto's surface. Fast forward to 2002 and we got even fewer pixels per image. We had to wring every bit of information from each pixel possible," Buie said. "It was a time- and computer-intensive process, but we were able to create the first maps of Pluto's surface, and they were truly spectacular for their time."

Those crude but valuable maps provided the best evidence that Pluto was not simply a homogenous ball of ices, but has a complex, variegated surface — a promising aspect for close-up inspection by a visiting spacecraft. Hubble's cameras revealed nearly a dozen distinctive bright features, none of which had ever been seen before, including a "ragged" northern polar cap bisected by a dark strip, a puzzling high-contrast bright spot seen rotating with the planet, a cluster of dark spots, and a bright linear marking. That bright spot feature, unusually rich in carbon monoxide frost, became the prime target for New Horizons to examine up close after NASA funded the mission in 2002. 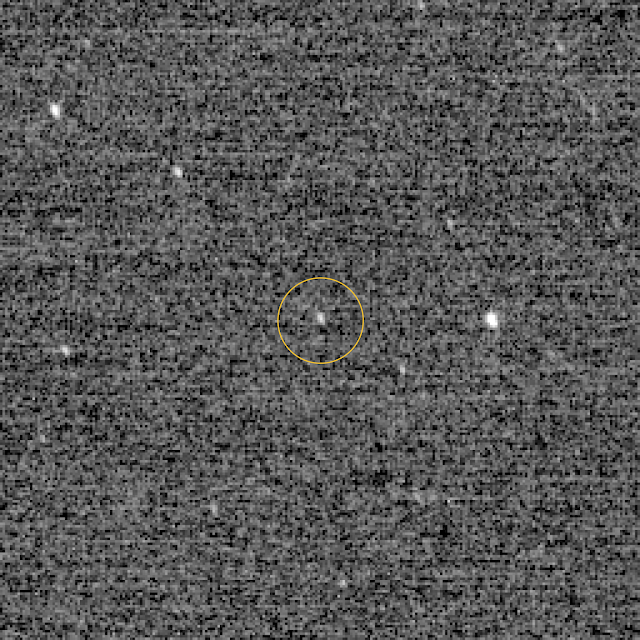 Image above: This is the first detection of Ultima Thule using the highest resolution mode of the Long Range Reconnaissance Imager (LORRI) aboard the New Horizons spacecraft. Three separate images, each with an exposure time of 0.5 seconds, were combined to produce the image. All three images were taken on Dec. 24, when Ultima was 4 billion miles (6.5 billion kilometers) from the Sun and 6.3 million miles (10 million kilometers) from the New Horizons spacecraft.(Click for full caption). Image Credits: NASA/JHUAPL/SwRI.

Although Charon was discovered in 1978 using ground-based telescopes, Hubble detected all four of Pluto's other moons: Nix and Hydra in 2005, Kerberos in 2011, and Styx in 2012. These moons were spotted in the Hubble images by New Horizons team members, most notably Project Scientist Hal Weaver of the Johns Hopkins Applied Physics Laboratory in Laurel, Maryland, and co-investigator Mark Showalter of the SETI Institute in Mountain View, California. By the time the latter two moons were discovered, New Horizons was in the final years of its almost decade-long, 3-billion-mile sprint from Earth to Pluto. 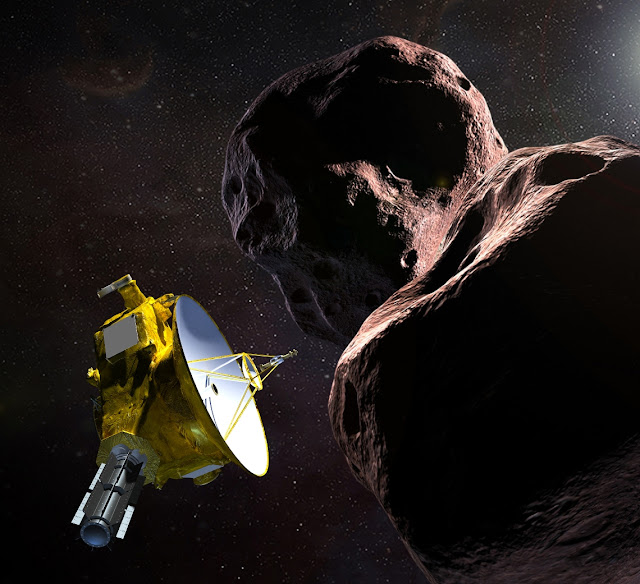 The discovery of these four small satellites was critical to overall Pluto flyby planning by identifying potential hazards, verifying the optimal spacecraft trajectory, and establishing the need for time to include observations of them as part of the flyby observing sequence. Without Hubble, New Horizons would have discovered these moons only a few months before the encounter — too late to effectively plan for their detailed study. To examine the possibility for an extended mission into the Kuiper Belt, the New Horizons team used Hubble in 2014 to conduct a needle-in-a-haystack search for a suitable Kuiper Belt Object that New Horizons could visit after passing Pluto. Hubble's sensitive telescope allowed it to look for fainter KBOs than ground-based telescopes can see. Hubble took deep exposures on 20 areas of the sky and found three suitable KBO targets about one billion miles beyond Pluto. Following NASA approval for a mission extension in 2016, Stern selected 2014 MU69, since nicknamed Ultima Thule, as the target for its January 2019 flyby. In the years since, Hubble has measured the target's red color and refined its orbit with dozens of additional observations. 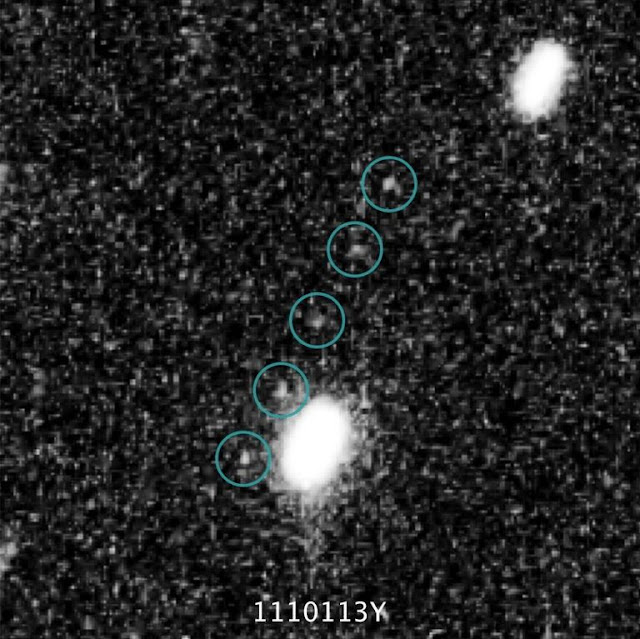 Image above: NASA's Hubble Space Telescope discovered the next target for the New Horizons spacecraft — 2014 MU69, nicknamed Ultima Thule — in June 2014. Seen in these five overlaid images, the object resides more than one billion miles beyond Pluto in the frigid outer reaches of the Kuiper Belt. New Horizons will reach Ultima Thule on New Year's Day 2019. Image Credits: NASA/STScI/JHUAPL/SwRI.

"Without Hubble there would be no flyby of Ultima Thule," said Stern. "And without Hubble, New Horizons would not have been as productive studying Pluto's small moons. In fact, without Hubble's early images revealing how interesting Pluto's surface markings are, there might have never been a mission to explore this fascinating dwarf planet."

The New Horizons spacecraft is now on course to fly by Ultima Thule — the farthest object ever explored by humankind — on New Year's Day, Jan. 1, at 12:33 a.m. EST. Follow New Horizons to Ultima Thule at http://pluto.jhuapl.edu/Mission/Where-is-New-Horizons.php.