At 5:28 a.m. EDT, Expedition 59 Flight Engineer Anne McClain of NASA used the International Space Station’s robotic Canadarm2 to grapple the Northrop Grumman Cygnus spacecraft as David Saint-Jacques of the Canadian Space Agency monitored Cygnus systems during its approach. Next, ground controllers will command the station’s arm to rotate and install Cygnus, dubbed the S.S. Roger Chaffee, on the bottom of the station’s Unity module. 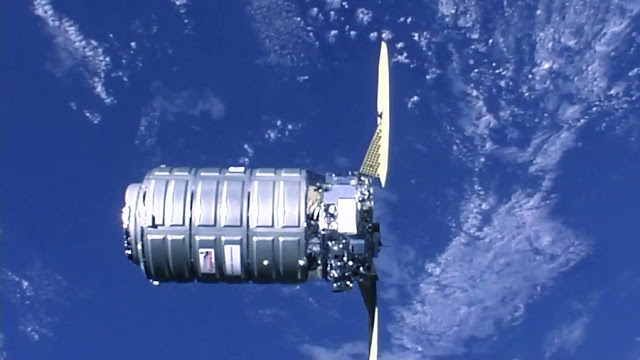 The station was flying over northeast France at an altitude of 254 miles when it was captured.

NASA Television coverage of installation will begin at 7 a.m., and installation of the Cygnus spacecraft to the space station is expected to be completed later this morning. Cygnus will remain at the orbiting laboratory for a three-month stay. 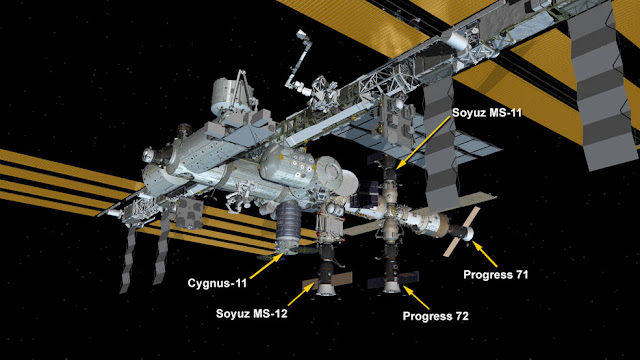 After its capture this morning at 5:28 a.m. EDT, the Northrop Grumman Cygnus spacecraft was bolted into place on the International Space Station’s Earth-facing port of the Unity module at 7:31 a.m. At the time of installation, Cygnus was flying 255 miles above the Indian Ocean just south of Singapore.

Cygnus will remain at the space station until July 23, when the spacecraft will depart the station, deploy NanoRacks customer CubeSats, then have an extended mission of nine months before it will dispose of several tons of trash during a fiery reentry into Earth’s atmosphere.

The spacecraft’s arrival brings close to 7,600 pounds of research and supplies to space station. Highlights of NASA-sponsored research to advance exploration goals and enable future missions to the Moon and Mars include:

Advanced Colloids Experiment-Temperature-10 (ACE-T-10) will test gels in a microgravity environment. This research could aid in the development of increasingly complex materials that may serve as the building blocks for a range of applications on Earth including foods, drugs, and electronic devices. The process also may provide an efficient method to build new materials and equipment in space.

Although the space station is well equipped for health and life sciences research, the equipment available for cellular and molecular biology still is limited compared to capabilities found in laboratories on Earth. To address this limitation, CSA designed Bio-Analyzer, a new tool the size of a video game console that astronauts on station easily can use to test body fluids such as blood, saliva, and urine, with just a few drops. It returns key analyses, such as blood cell counts, in just two to three hours, eliminating the need to freeze and store samples.

Analyzing aging of the arteries in astronauts

The Vascular Aging investigation uses ultrasounds, blood samples, oral glucose tolerance tests, and wearable sensors to study aging-like changes that occur in many astronauts during their stay on the space station. It’s one of three Canadian experiments exploring the effects of weightlessness on the blood vessels and heart, and the links between these effects and bone health, blood biomarkers, insulin resistance, and radiation exposure. Increased understanding of these mechanisms can be used to address vascular aging in both astronauts and the aging Earth population.

Spaceflight is known to have a dramatic influence on an astronaut’s immune response, but there is little research on its effect following an actual challenge to the body’s immune system. The rodent immune system closely parallels that of humans, and Rodent Research-12: Tetanus Antibody Response by B cells in Space (TARBIS) will examine the effects of spaceflight on the function of antibody production and immune memory. This investigation aims to advance the development of measures to counter these effects and help maintain crew health during future long-duration space missions. On Earth, it could advance research to improve the effectiveness of vaccines and therapies for treating diseases and cancers.

A fleet of small robots is set to take on big jobs aboard the space station. Building on the success of SPHERES, NASA will test Astrobee, a robotic system comprised of three cube-shaped robots and a docking station for recharging; the first two are aboard Cygnus. The free-flying robots use electric fans for propulsion and cameras and sensors help them navigate their surroundings. The robots also have an arm to grasp station handrails or grab and hold items. Astrobee can operate in automated mode or under remote control from the ground as it assists with routine chores on station, and requires no supervision from the crew. This has the potential to free up astronauts to conduct more research.