Lock the Planck: the kilogram has a new definition

Since yesterday, all SI base units will be defined based on natural constants, with the kilogram the last to join the ranks 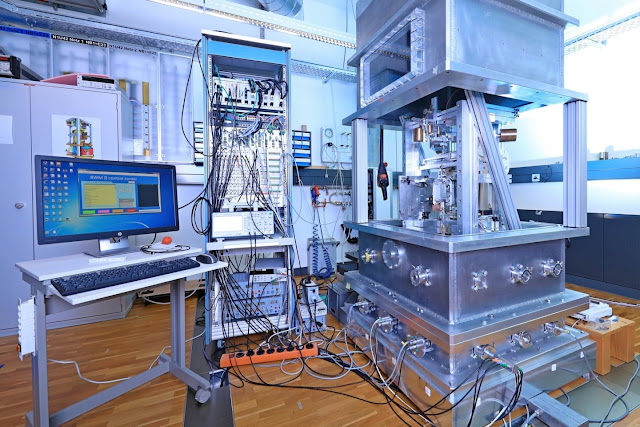 Image above: The Kibble balance built by the Swiss Federal Institute of Metrology to measure the Planck constant with ultra-high precision (Image: METAS).

Until yesterday, a kilogram was defined as the mass of the International Prototype Kilogram (IPK), a platinum–iridium cylinder located in Paris, France. While all the other base units of the International System of Units (SI) had been redefined over the years based on fundamental constants of nature or atomic properties, the kilogram had remained since the late 19th century the only one to rely on a human-made artefact.

This changes yesterday, and metrologists – those who study measurement – are excited. On the occasion of World Metrology Day, which commemorates the signing of the Metre Convention back in 1875, the kilogram has been given a new definition. From now on, it will be defined based on the most precise measurement ever made of the Planck constant, which can be expressed in terms of the SI units kilogram, metre and second. Since the latter two units are already defined by constants of nature, the value of a kilogram can be obtained without relying on comparing it with a physical reference block.

But measuring the Planck constant to a suitably high precision of ten parts per billion required decades of work by international teams across continents, and CERN played a small part in the endeavour.

In 1975, British physicist Bryan Kibble proposed a device, then known as a watt balance and now called the Kibble balance in his honour, which would allow the Planck constant to be measured precisely based on the IPK. Once the precision was achieved, the Planck constant’s value could be fixed and the definitions inverted, removing the kilogram’s dependence on the IPK. Several Kibble balances around the world were constructed to compare measurements, including one in Switzerland. METAS, the Swiss Federal Institute of Metrology, has been working on their Kibble balance project for almost two decades, the activity being led by Ali Eichenberger and Henri Baumann. Knowing CERN’s expertise in magnet systems, Eichenberger and Baumann reached out to the Laboratory to help prepare the required magnets.

“I am extremely proud to have participated in this adventure,” says Davide Tommasini from CERN’s Magnets, Superconductors and Cryostats group, who was directly involved in the project. “I do not know if the redefinition of the kilogram has a direct impact on the experiments at CERN, but the past teaches us that there are many new advancements which, at their initial moment, may not appear in their whole potential.”

In 2018, the Kibble balance in Canada measured the Planck constant with necessary ultrahigh precision, allowing a combination of measurements from around the world to help fix its value. But does it affect the value of the kilogram itself? Not really. “The Plank constant has been fixed at 6.626070150 × 10−34 kg⋅m2/s using the IPK as standard,” explains Eichenberger. “So from today, one kilogram will stay the same. If the IPK drifts further with time then its value will change, but any mass calibration will have an uncertainty of the order of 20 parts per billion.”

So while it is a momentous occasion worthy of celebration, you won’t have to recalibrate your bathroom scales just yet.