Science Results Packed for Return to Earth Aboard Dragon Monday

The Expedition 59 crew is starting the weekend preparing the SpaceX Dragon cargo craft for its departure from the International Space Station on Monday. The space residents are also juggling a variety of research work and lab maintenance tasks today.

NASA TV is broadcasting the robotic release of Dragon from the station live on NASA TV beginning Monday at 11:45 a.m. EDT.  Robotics controllers will command the Canadarm2 robotic arm to release the space freighter around 12:09 p.m. while astronaut David Saint-Jacques monitors from the cupola. Dragon will splashdown in the Pacific about 5:48 p.m. and will not be seen on NASA TV. 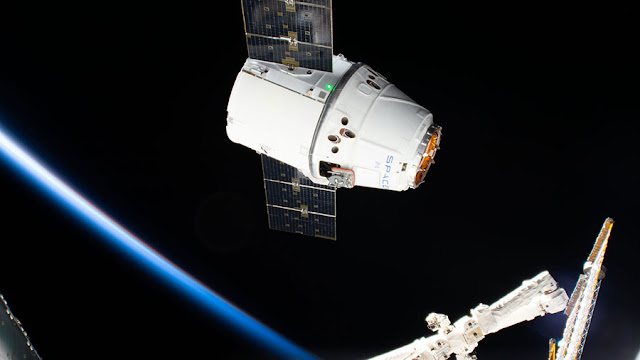 Image above: The SpaceX Dragon cargo craft approaches the International Space Station on May 6, 2019, to deliver than 5,500 pounds of research, equipment, cargo and supplies to the Expedition 59 crew. Image Credit: NASA.

Several critical experiments have wrapped up aboard the orbiting lab with the completed results and hardware being packed inside the Dragon this weekend. After the space freighter splashes down Monday, it will be towed to shore where the finalized research will be distributed to labs around the world for analysis.

Astronauts Anne McClain and David Saint-Jacques are cleaning up and inspecting the Life Sciences Glovebox (LSG) today. This comes after the crew completed a month-long study of the immune system’s response to weightlessness inside the LSG. Samples from that study will also return to Earth aboard Dragon Monday.

Christina Koch of NASA is helping cosmonauts Oleg Kononenko and Alexey Ovchinin clean up after the duo’s spacewalk on Wednesday. She stowed the U.S. tools they used back in the Quest airlock while the cosmonauts serviced their Russian Orlan spacesuits in the Pirs airlock.

Two Cosmonauts Wrap Up the Fourth Spacewalk at the Station This Year
https://orbiterchspacenews.blogspot.com/2019/05/two-cosmonauts-wrap-up-fourth-spacewalk.html