Hayabusa2 touched down on Ryugu to collect material from beneath the surface.

Animation above: Hayabusa2 descended to asteroid Ryugu to collect material from underneath the surface. Animation Credit: JAXA.

Japan’s Hayabusa2 asteroid mission has performed the last major act in its saga of space exploration. At 10:18 a.m. Tokyo time on Thursday, the spacecraft descended on the asteroid Ryugu for the second time this year to collect material from a crater it gouged out in April by bombarding the body’s surface with a pellet. If the collection was successful — something that mission team will not know for a while — it will be the first time in history that a mission has gathered material from an asteroid’s innards.

The mission collected a sample from Ryugu’s surface in February. After the spacecraft returns its booty to Earth next year, scientists will be able to compare the composition of material from the two touchdown sites. That could reveal how exposure to the rigours of space, and in particular solar heating, solar wind and cosmic rays, affected the chemistry on the surface.

“This is a cornucopia of a mission,” says Lucy McFadden, a planetary astronomer at NASA’s Goddard Space Flight Center in Greenbelt, Maryland. 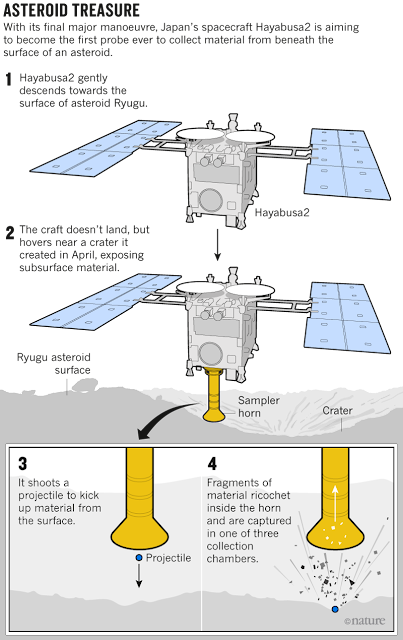 Hayabusa2 arrived at Ryugu in June 2018. It deployed landers to the surface that took magnetic, chemical and other measurements and sent pictures back. The spacecraft completed its first touchdown in February this year and then, in April, it shot a projectile that produced a 10-metre-wide crater, uncovering material under the asteroid’s surface. Later this year, Hayabusa2 will sail back to Earth, where by the end of 2020 it is expected to deliver its samples for analysis.

In its latest move, Hayabusa2 aimed for a spot just outside the crater, rather than descending inside the crater itself, which would have been “rather risky”, mission manager Makoto Yoshikawa of the Japan Aerospace Exploration Agency Institute of Space (JAXA) Sagamihara told Nature.

“If you’re going into a depression, then you have to worry about things like the solar panels sticking out” and potentially colliding with the surface, says Harold Connolly, a cosmochemist at Rowan University in Glassboro, New Jersey and a co-investigator on the mission team. He is also working on NASA’s OSIRIS-REx mission, which is exploring another similar body — called Bennu — and plans to collect materials from its surface next year. The two missions exchange information and collaborate, in part by sharing staff.

The 1-kilometre-wide Ryugu is what scientists call a rubble-pile asteroid: a collection of rocks and dust held together loosely by gravity. Its low density — only slightly higher than liquid water’s — suggests that it is mostly empty space, and that it has accumulated from debris produced by a collision of other bodies, Connolly says.

Suction does not work in the vacuum of space, and Ryugu has almost no gravity. So the team devised an original technique that allows the spacecraft to pick material up while bouncing on the surface, without actually landing. The method involved loosening material and catching it in a horn. 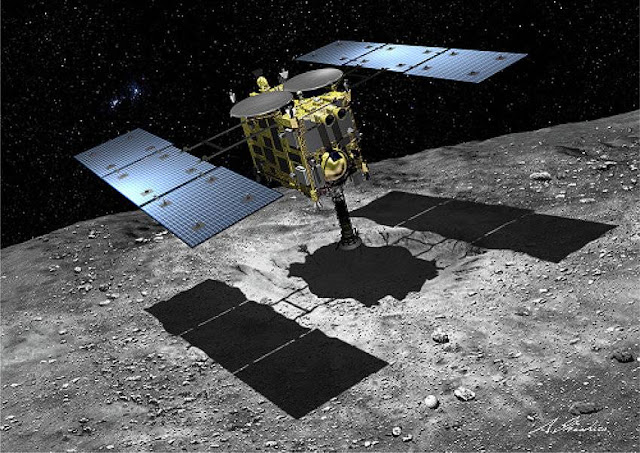 The goal is to bring back a total of around a gram of material. But the team will have to wait until the probe returns to Earth to open the chambers and see what’s inside. While Hayabusa2 is in space, mission control has no way of knowing how much material has been collected in each touchdown operation, Yoshikawa says.

Physicists hope that the materials will help to solve asteroid mysteries — for instance, it’s not clear why Ryugu is so dark. It is among the least reflective bodies in the Solar System, darker than any known meteorite, and the material exposed at the bottom of the freshly dug crater is darker still. Researchers with JAXA are keen to find out whether the April impact itself made the material darker, or whether the crater’s colour is typical of Ryugu’s composition and the surface has been lightened by solar radiation.

Ryugu’s surface is also strewn with an unusual number of boulders — more per unit surface area than any asteroid explored so far, according to a paper the mission scientists published in May1. This makes the approach and touchdown particularly hazardous for Hayabusa2, especially given that the craft has to operate autonomously owing to the large distance from Earth.