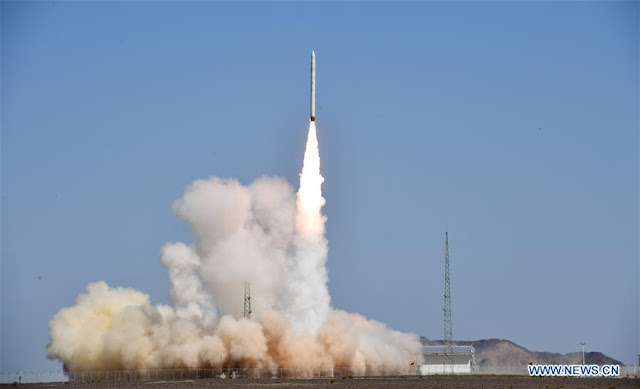 Smart Dragon-1 (SD-1, also known as Lightning Dragon No.1, Jielong-1, 捷龙一号) is a new solid-propellant rocket developed by the China Rocket Co. Ltd. affiliated to the China Academy of Launch Vehicle Technology (CALVT). According to official sources, SD-1 has a total length of 19.5 meters, a diameter of 1.2 meter, a takeoff weight of about 23.1 tonnes and is capable of sending 200 kg payloads to a Sun-synchronous orbit with at an altitude of 500 km.

Four rocket motors fired in succession as the Jielong 1 booster flew south from Jiuquan. CALT said the Jielong 1 rocket placed its three satellite payloads into orbit, and Chinese officials hailed the mission as a success.

One of the microsatellites, owned by a Beijing-based company named Qiansheng Exploration Technology Co. Ltd., weighed around 140 pounds (65 kilograms) at the time of launch. The spacecraft hosts an Earth-imaging instrument with a resolution of less than 6.6 feet (2 meters), could pave the way for a fleet of Earth-observing satellites from Qiansheng.