Astronomers first recognized the GRB phenomenon 46 years ago. The blasts appear at random locations in the sky about once a day, on average.

The most common type of GRB occurs when a star much more massive than the Sun runs out of fuel. Its core collapses and forms a black hole, which then blasts jets of particles outward at nearly the speed of light. These jets pierce the star and continue into space. They produce an initial pulse of gamma rays — the most energetic form of light — that typically lasts about a minute. 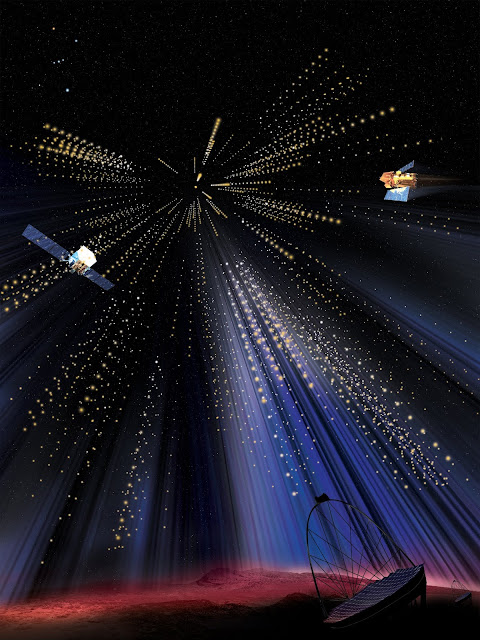 Image above: On Jan. 14, 2019, the Major Atmospheric Gamma Imaging Cherenkov (MAGIC) observatory in the Canary Islands captured the highest-energy light every recorded from a gamma-ray burst. MAGIC began observing the fading burst just 50 seconds after it was detected thanks to positions provided by NASA's Fermi and Swift spacecraft (top left and right, respectively, in this illustration). The gamma rays packed energy up to 10 times greater than previously seen. Image Credits: NASA/Fermi and Aurore Simonnet, Sonoma State University.

As the jets race outward, they interact with surrounding gas and emit light across the spectrum, from radio to gamma rays. These so-called afterglows can be detected up to months — and rarely, even years — after the burst at longer wavelengths.

“Much of what we’ve learned about GRBs over the past couple of decades has come from observing their afterglows at lower energies,” said Elizabeth Hays, the Fermi project scientist at NASA’s Goddard Space Flight Center in Greenbelt, Maryland. “Now, thanks to these new ground-based detections, we’re seeing the gamma rays from gamma-ray bursts in a whole new way.”

Two papers published in the journal Nature describe each of the discoveries. A third paper analyzes one of the bursts using a rich set of multiwavelength data from observatories in space and on the ground. A fourth paper, accepted by The Astrophysical Journal, explores the Fermi and Swift data in greater detail.

On Jan. 14, 2019, just before 4 p.m. EST, both the Fermi and Swift satellites detected a spike of gamma rays from the constellation Fornax. The missions alerted the astronomical community to the location of the burst, dubbed GRB 190114C. 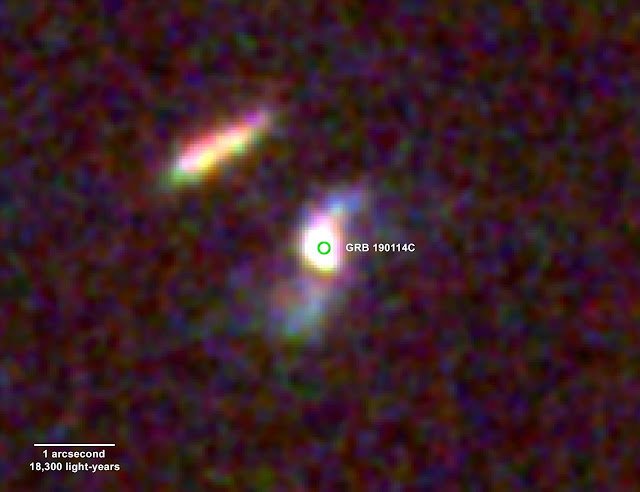 Image above: The fading afterglow of GRB 190114C and its home galaxy were imaged by the Hubble Space Telescope on Feb. 11 and March 12, 2019. The difference between these images reveals a faint, short-lived glow (center of the green circle) located about 800 light-years from the galaxy’s core. Blue colors beyond the core signal the presence of hot, young stars, indicating that this is a spiral galaxy somewhat similar to our own. It is located about 4.5 billion light-years away in the constellation Fornax. Image Credits: NASA, ESA, and V. Acciari et al. 2019.

One facility receiving the alerts was the Major Atmospheric Gamma Imaging Cherenkov (MAGIC) observatory, located on La Palma in the Canary Islands, Spain. Both of its 17-meter telescopes automatically turned to the site of the fading burst. They began observing the GRB just 50 seconds after it was discovered and captured the most energetic gamma rays yet seen from these events.

The energy of visible light ranges from about 2 to 3 electron volts. In 2013, Fermi’s Large Area Telescope (LAT) detected light reaching an energy of 95 billion electron volts (GeV), then the highest seen from a burst. This falls just shy of 100 GeV, the threshold for so-called very high-energy (VHE) gamma rays. With GRB 190114C, MAGIC became the first facility to report unambiguous VHE emission, with energies up to a trillion electron volts (1 TeV). That’s 10 times the peak energy Fermi has seen to date.

“Twenty years ago, we designed MAGIC specifically to search for VHE emission from GRBs, so this is a tremendous success for our team,” said co-author Razmik Mirzoyan, a scientist at the Max Planck Institute for Physics in Munich and the spokesperson for the MAGIC collaboration. “The discovery of TeV gamma rays from GRB 190114C shows that these explosions are even more powerful than thought before. More importantly, our detection facilitated an extensive follow-up campaign involving more than two dozen observatories, offering important clues to the physical processes at work in GRBs.” 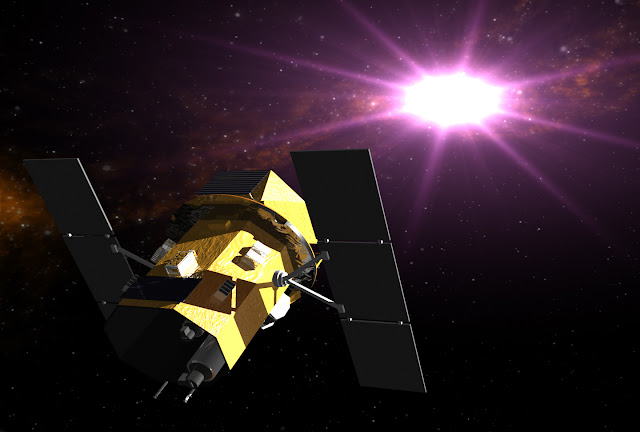 These included NASA’s NuSTAR mission, the European Space Agency’s XMM-Newton X-ray satellite, the NASA/ESA Hubble Space Telescope, in addition to Fermi and Swift, along with many ground-based observatories. Hubble images acquired in February and March captured the burst’s optical afterglow. They show that the blast originated in a spiral galaxy about 4.5 billion light-years away. This means the light from this GRB began traveling to us when the universe was two-thirds of its current age.

Another paper presents observations of a different burst, which Fermi and Swift both discovered on July 20, 2018. Ten hours after their alerts, the High Energy Stereoscopic System (H.E.S.S.) pointed its large, 28-meter gamma-ray telescope to the location of the burst, called GRB 180720B. A careful analysis carried out during the weeks following the event revealed that H.E.S.S. clearly detected VHE gamma rays with energies up to 440 GeV. Even more remarkable, the glow continued for two hours following the start of the observation. Catching this emission so long after the GRB’s detection is both a surprise and an important new discovery.

Scientists suspect that most of the gamma rays from GRB afterglows originate in magnetic fields at the jet’s leading edge. High-energy electrons spiraling in the fields directly emit gamma rays through a mechanism called synchrotron emission. 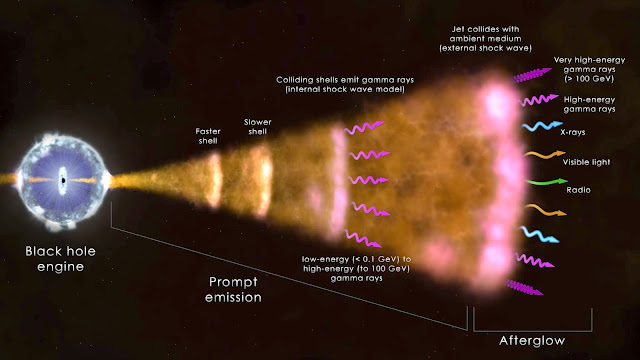 Image above: Ground-based facilities have detected radiation up to a trillion times the energy of visible light from a cosmic explosion called a gamma-ray burst (GRB). This illustration shows the set-up for the most common type. The core of a massive star (left) has collapsed and formed a black hole. This “engine” drives a jet of particles that moves through the collapsing star and out into space at nearly the speed of light. The prompt emission, which typically lasts a minute or less, may arise from the jet’s interaction with gas near the newborn black hole and from collisions between shells of fast-moving gas within the jet (internal shock waves). The afterglow emission occurs as the leading edge of the jet sweeps up its surroundings (creating an external shock wave) and emits radiation across the spectrum for some time — months to years, in the case of radio and visible light, and many hours at the highest gamma-ray energies yet observed. These far exceed 100 billion electron volts (GeV) for two recent GRBs. Image Credits: NASA's Goddard Space Flight Center.

But both the H.E.S.S. and MAGIC teams interpret the VHE emission as a distinct afterglow component, which means some additional process must be at work. The best candidate, they say, is inverse Compton scattering. High-energy electrons in the jet crash into lower-energy gamma rays and boost them to much higher energies.

In the paper detailing the Fermi and Swift observations, the researchers conclude that an additional physical mechanism may indeed be needed to produce the VHE emission. Within the lower energies observed by these missions, however, the flood of synchrotron gamma rays makes uncovering a second process much more difficult. 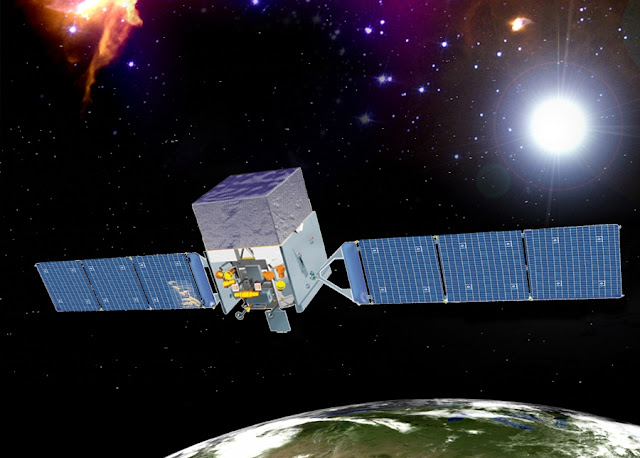 “With Fermi and Swift, we don’t see direct evidence of a second emission component,” said Goddard’s S. Bradley Cenko, the principal investigator for Swift and a co-author of the Fermi-Swift and multiwavelength papers. “However, if the VHE emission arises from the synchrotron process alone, then fundamental assumptions used in estimating the peak energy produced by this mechanism will need to be revised.”

Future burst observations will be needed to clarify the physical picture. The new VHE data open a new pathway for understanding GRBs, one that will be further extended by MAGIC, H.E.S.S. and a new generation of ground-based gamma-ray telescopes now being planned.

The Fermi Gamma-ray Space Telescope is an astrophysics and particle physics partnership managed by NASA's Goddard Space Flight Center in Greenbelt, Maryland. Fermi was developed in collaboration with the U.S. Department of Energy, with important contributions from academic institutions and partners in France, Germany, Italy, Japan, Sweden and the United States.

Goddard manages the Swift mission in collaboration with Penn State in University Park, the Los Alamos National Laboratory in New Mexico and Northrop Grumman Innovation Systems in Dulles, Virginia. Other partners include the University of Leicester and Mullard Space Science Laboratory in the United Kingdom, Brera Observatory and the Italian Space Agency in Italy.