Meet the 42: ESO images some of the biggest asteroids in our Solar System 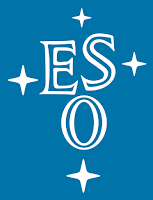 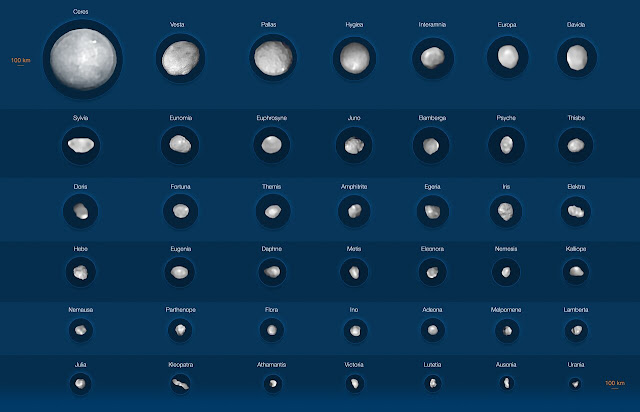 Using the European Southern Observatory’s Very Large Telescope (ESO’s VLT) in Chile, astronomers have imaged 42 of the largest objects in the asteroid belt, located between Mars and Jupiter. Never before had such a large group of asteroids been imaged so sharply. The observations reveal a wide range of peculiar shapes, from spherical to dog-bone, and are helping astronomers trace the origins of the asteroids in our Solar System. 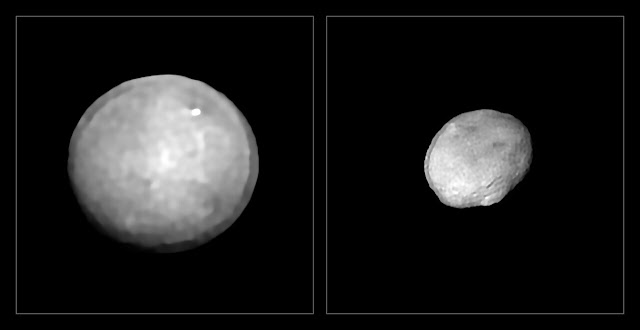 The detailed images of these 42 objects are a leap forward in exploring asteroids, made possible thanks to ground-based telescopes, and contribute to answering the ultimate question of life, the Universe, and everything [1]. 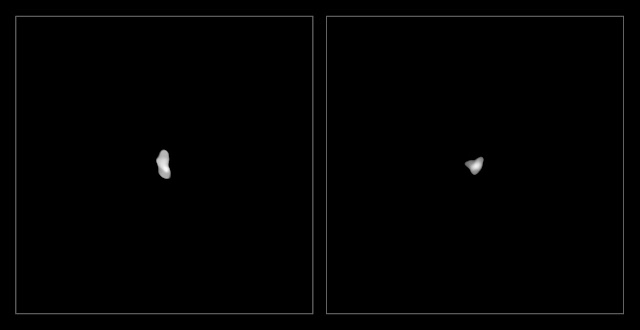 “Only three large main belt asteroids, Ceres, Vesta and Lutetia, have been imaged with a high level of detail so far, as they were visited by the space missions Dawn and Rosetta of NASA and the European Space Agency, respectively,” explains Pierre Vernazza, from the Laboratoire d’Astrophysique de Marseille in France, who led the asteroid study published today in Astronomy & Astrophysics. "Our ESO observations have provided sharp images for many more targets, 42 in total." 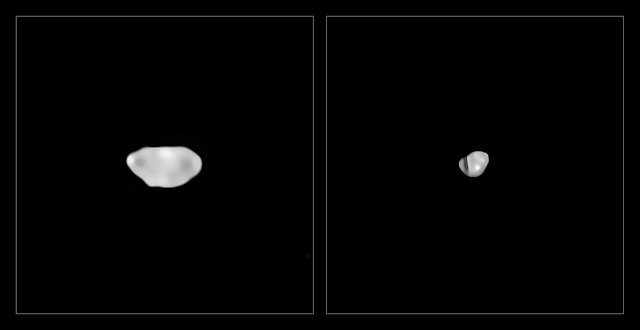 The previously small number of detailed observations of asteroids meant that, until now, key characteristics such as their 3D shape or density had remained largely unknown. Between 2017 and 2019, Vernazza and his team set out to fill this gap by conducting a thorough survey of the major bodies in the asteroid belt. 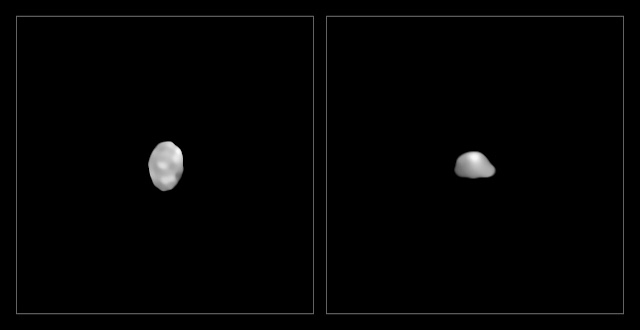 Most of the 42 objects in their sample are larger than 100 km in size; in particular, the team imaged nearly all of the belt asteroids larger than 200 kilometres, 20 out of 23. The two biggest objects the team probed were Ceres and Vesta, which are around 940 and 520 kilometres in diameter, whereas the two smallest asteroids are Urania and Ausonia, each only about 90 kilometres. 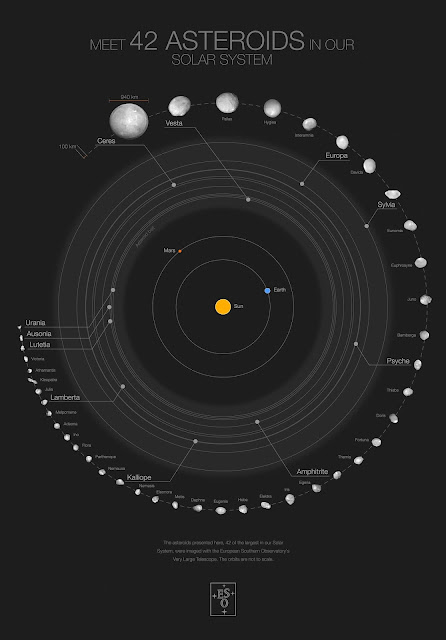 By reconstructing the objects’ shapes, the team realised that the observed asteroids are mainly divided into two families. Some are almost perfectly spherical, such as Hygiea and Ceres, while others have a more peculiar, “elongated” shape, their undisputed queen being the “dog-bone” asteroid Kleopatra. 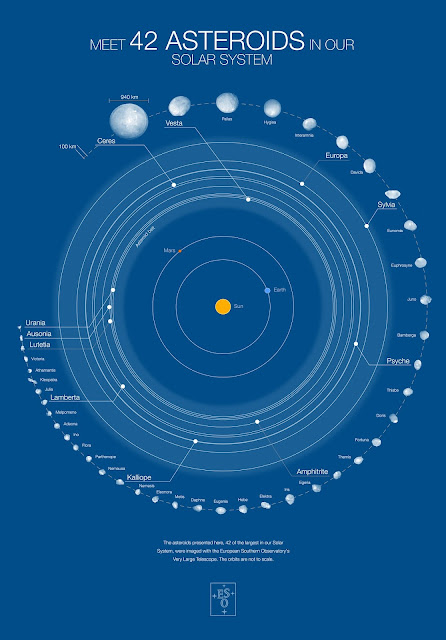 This large difference in density suggests the asteroids’ composition varies significantly, giving astronomers important clues about their origin. “Our observations provide strong support for substantial migration of these bodies since their formation. In short, such tremendous variety in their composition can only be understood if the bodies originated across distinct regions in the Solar System,” explains Josef Hanuš of the Charles University, Prague, Czech Republic, one of the authors of the study. In particular, the results support the theory that the least dense asteroids formed in the remote regions beyond the orbit of Neptune and migrated to their current location.

42 asteroids in our Solar System and their orbits

These findings were made possible thanks to the sensitivity of the Spectro-Polarimetric High-contrast Exoplanet REsearch (SPHERE) instrument mounted on ESO’s VLT [2]. “With the improved capabilities of SPHERE, along with the fact that little was known regarding the shape of the largest main belt asteroids, we were able to make substantial progress in this field,” says co-author Laurent Jorda, also of the Laboratoire d'Astrophysique de Marseille.

Astronomers will be able to image even more asteroids in fine detail with ESO’s upcoming Extremely Large Telescope (ELT), currently under construction in Chile and set to start operations later this decade. “ELT observations of main-belt asteroids will allow us to study objects with diameters down to 35 to 80 kilometres, depending on their location in the belt, and craters down to approximately 10 to 25 kilometres in size,” says Vernazza. “Having a SPHERE-like instrument at the ELT would even allow us to image a similar sample of objects in the distant Kuiper Belt. This means we’ll be able to characterise the geological history of a much larger sample of small bodies from the ground.”

[1] In The Hitchhiker's Guide to the Galaxy by Douglas Adams, the number 42 is the answer to the "Ultimate Question of Life, the Universe, and Everything." Today, 12 October 2021, is the 42nd anniversary of the publication of the book.

[2] All observations were conducted with the Zurich IMaging POLarimeter (ZIMPOL), an imaging polarimeter subsystem of the SPHERE instrument that operates at visible wavelengths.

ESO is the foremost intergovernmental astronomy organisation in Europe and the world’s most productive ground-based astronomical observatory by far. It has 16 Member States: Austria, Belgium, the Czech Republic, Denmark, France, Finland, Germany, Ireland, Italy, the Netherlands, Poland, Portugal, Spain, Sweden, Switzerland and the United Kingdom, along with the host state of Chile and with Australia as a Strategic Partner. ESO carries out an ambitious programme focused on the design, construction and operation of powerful ground-based observing facilities enabling astronomers to make important scientific discoveries. ESO also plays a leading role in promoting and organising cooperation in astronomical research. ESO operates three unique world-class observing sites in Chile: La Silla, Paranal and Chajnantor. At Paranal, ESO operates the Very Large Telescope and its world-leading Very Large Telescope Interferometer as well as two survey telescopes, VISTA working in the infrared and the visible-light VLT Survey Telescope. Also at Paranal ESO will host and operate the Cherenkov Telescope Array South, the world’s largest and most sensitive gamma-ray observatory. ESO is also a major partner in two facilities on Chajnantor, APEX and ALMA, the largest astronomical project in existence. And on Cerro Armazones, close to Paranal, ESO is building the 39-metre Extremely Large Telescope, the ELT, which will become “the world’s biggest eye on the sky”.

For journalists: subscribe to receive our releases under embargo in your language: https://www.eso.org/public/outreach/pressmedia/#epodpress_form

For scientists: got a story? Pitch your research: http://eso.org/sci/publications/announcements/sciann17277.html