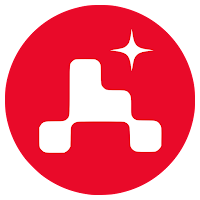 NASA, along with the European Space Agency, is developing a campaign to return the Martian samples to Earth.

Image above: This composite of two images shows the hole drilled by NASA's Perseverance rover during its sucessful sample-collection attempt. Image Credits: NASA/JPL-Caltech.

On Sept. 1, NASA’s Perseverance rover unfurled its arm, placed a drill bit at the Martian surface, and drilled about 2 inches, or 6 centimeters, down to extract a rock core. The rover later sealed the rock core in its tube. This historic event marked the first time a spacecraft packed up a rock sample from another planet that could be returned to Earth by future spacecraft.

Mars Sample Return is a multi-mission campaign designed to retrieve the cores Perseverance will collect over the next several years. Currently in the concept design and technology development phase, the campaign is one of the most ambitious endeavors in spaceflight history, involving multiple spacecraft, multiple launches, and dozens of government agencies.

“Returning a sample from Mars has been a priority for the planetary science community since the 1980s, and the potential opportunity to finally realize this goal has unleashed a torrent of creativity,” said Michael Meyer, lead scientist for NASA’s Mars Exploration Program based at NASA Headquarters in Washington.

Animation above: The first cored sample of Mars rock is visible (at center) inside a titanium sample collection tube in this image from the Sampling and Caching System Camera (known as CacheCam) of NASA’s Perseverance rover. The image was taken on Sept. 6, 2021, (the 194th sol, or Martian day, of the mission), prior to the system attaching and sealing a metal cap onto the tube. The image was taken so the cored-rock sample would be in focus. The dark ring surrounding the sample is a portion of the sample tube’s inner wall. The bright, gold-colored ring surrounding the tube and sample is the “bearing race,” an asymmetrical flange that assists in shearing off a sample once the coring drill has bored into a rock. The outermost, mottled-brown disc in this image is a portion of the sample-handling arm inside the rover’s adaptive caching assembly. Animation Credits: NASA/JPL-Caltech.

The benefit of analyzing samples back on Earth — rather than assigning the task to a rover on the Martian surface — is that scientists can use many kinds of cutting-edge lab technologies that are too big and too complex to send to Mars. And they can do analyses much faster in the lab while providing far more information on whether life ever existed on Mars.

“I have dreamed of having Mars samples to analyze since I was a graduate student,” said Meenakshi Wadhwa, principal scientist for the Mars Sample Return program, which is managed by NASA’s Jet Propulsion Laboratory in Southern California. “The collection of these well-documented samples will eventually allow us to analyze them in the best laboratories here on Earth once they are returned.”

Mars Sample Return would involve several firsts aimed at settling an open question: Has life taken root anywhere in the solar system besides Earth?  “I’ve been working my whole career for the opportunity to answer this question,” said Daniel Glavin, an astrobiologist from NASA’s Goddard Space Flight Center in Greenbelt, Maryland. Glavin is helping design systems to protect the Martian samples from contamination throughout their journey from Mars to Earth.

Video above: Collecting samples from Mars and bringing them back to Earth will be a historic undertaking that started with the launch of NASA’s Perseverance rover on July 30, 2020. Perseverance collected its first rock core samples in September 2021. The rover will leave them on Mars for a future mission to retrieve and return to Earth. NASA and the European Space Agency (ESA) are solidifying concepts for this proposed Mars Sample Return campaign. The current concept includes a lander, a fetch rover, an ascent vehicle to launch the sample container to Martian orbit, and a retrieval spacecraft with a payload for capturing and containing the samples and then sending them back to Earth to land in an unpopulated area. Video Credits: Animation credits: NASA/JPL-Caltech, ESA, NASA/GSFC and NASA/GRC. Technical assistance: James Tralie, NASA Goddard. Music credit: Axel Coon and Ralf Goebel of Universal Production Music.

Being developed in collaboration with ESA (the European Space Agency), Mars Sample Return would require autonomously launching a rocket full of precious extraterrestrial cargo from the surface of Mars. Engineers would need to ensure that the rocket’s trajectory aligns with that of a spacecraft orbiting Mars so the sample capsule could be transferred to the orbiter. The orbiter would then return the sample capsule to Earth where scientists would be waiting to safely contain it prior to transport to a secure biohazard facility, one that is under development now.

Before bringing Martian samples to Earth, scientists and engineers must overcome several challenges. Here’s a look at one:

Keeping samples chemically pristine for rigorous study on Earth while subjecting their storage container to extreme sterilization measures to ensure nothing hazardous is delivered to Earth is a task that makes Mars Sample Return truly unprecedented.

Billions of years ago the Red Planet may have had a cozy environment for life that thrives in warm and wet conditions. However, it’s highly unlikely that NASA will bring back samples with living Martian organisms, based on decades of data from orbiters, landers, and rovers at Mars. Instead, scientists are hoping to find fossilized organic matter or other signs of ancient microbial life.

Despite the low risk of bringing anything alive to Earth, an abundance of caution is driving NASA to take significant measures to ensure the Martian samples remain securely sealed throughout their journey. After collecting rock cores throughout Jezero Crater and placing them inside tubes made mostly of titanium, one of the world’s strongest metals, Perseverance tightly seals the tubes to prevent the inadvertent release of even the smallest particle. The tubes are then stored in the rover’s belly until NASA decides on the time and place to drop them on the Martian surface.

A sample return campaign would include an ESA sample fetch rover that would launch from Earth later this decade to pick up these samples collected by Perseverance. Engineers at NASA’s Glenn Research Center in Cleveland, Ohio, are designing the wheels for the fetch rover. The rover would transfer samples to a lander, being developed at JPL. A robotic arm on the lander would pack the samples into the tip of a rocket that is being designed by NASA’s Marshall Space Flight Center in Huntsville, Alabama.

The rocket would deliver the sample capsule to Martian orbit, where an ESA orbiter would be waiting to receive it. Inside the orbiter, the capsule would be prepared for delivery to Earth by a payload being developed by a team led by NASA Goddard. This preparation would include sealing the sample capsule inside a clean container to trap any Martian material inside, sterilizing the seal, and using a robotic arm being developed at Goddard to place the sealed container into an Earth-entry capsule before the return trip to Earth. 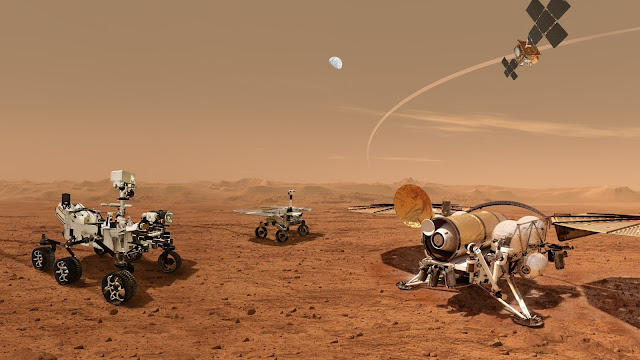 Image above: This illustration shows a concept for a set of future robots working together to ferry back samples collected on the surface of Mars by NASA's Perseverance rover. Image Credits: NASA/ESA/JPL-Caltech.

One of the primary tasks for NASA engineers is figuring out how to seal and sterilize the sample container without obliterating important chemical signatures in the rock cores inside. Among the techniques the team is currently testing is brazing, which involves melting a metal alloy into a liquid that essentially glues metal together. Brazing can seal the sample container at a temperature high enough to sterilize any dust that might remain in the seam.

“Among our biggest technical challenges right now is that inches away from metal that’s melting at about 1,000 degrees Fahrenheit (or 538 degrees Celsius) we have to keep these extraordinary Mars samples below the hottest temperature they might have experienced on Mars, which is about 86 degrees Fahrenheit (30 degrees Celsius),” said Brendan Feehan, the Goddard systems engineer for the system that will capture, contain, and deliver the samples to Earth aboard ESA’s orbiter. “Initial results from the testing of our brazing solution have affirmed that we’re on the right path.”

Careful design by Feehan and his colleagues would allow heat to be applied only to where it is needed for brazing, limiting heat flow to the samples. Additionally, engineers could insulate the samples in a material that will absorb the heat and then release it very slowly, or they could install conductors that direct the heat away from the samples.

Whatever technique the team develops will be critical not only for the Martian samples, Glavin said, but for future sample-return missions to Europa or Enceladus, “where we could collect and return fresh ocean plume samples that could contain living extraterrestrial organisms. So we need to figure this out.”

NASA’s rigorous efforts to eliminate risk of harmful contamination of Earth date to the international Outer Space Treaty of 1967, which calls on nations to prevent contaminating celestial bodies with organisms from Earth, and to prevent contamination of Earth through returned samples. To safely return a Martian sample to Earth, NASA is partnering not only with ESA, but also with at least 19 U.S. government departments and agencies, including the U.S. Centers for Disease Control and Prevention and the U.S. Department of Homeland Security.