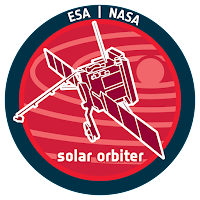 The chance that ESA’s Solar Orbiter spacecraft will encounter space debris during its upcoming Earth flyby is very, very low. However, the risk is not zero and is greater than any other flyby ESA has performed. That there is this risk at all highlights the mess we’ve made of space – and why we need to take action to clean up after ourselves. 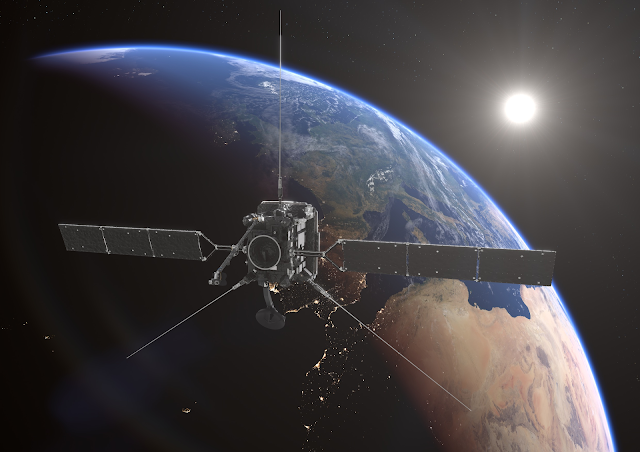 On 27 November, after a year and eight months flying through the inner Solar System, Solar Orbiter will swing by home to ‘drop off’ some extra energy. This will line the spacecraft up for its next six flybys of Venus. These final gravity assists will hone and tilt Solar Orbiter’s orbit, enabling the heat-protected probe to capture the first-ever direct images of our star’s poles, and much more. 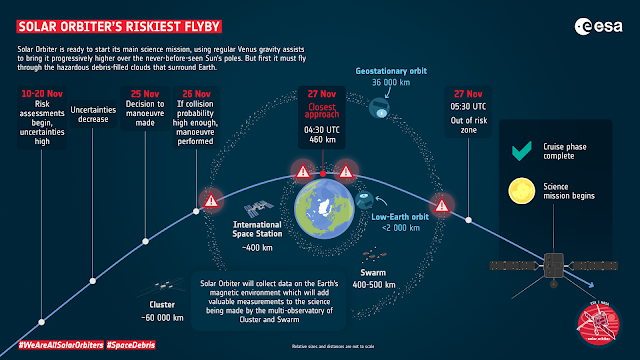 How risky? It’s all relative

Before we worry too much, let’s start by pointing out that the chance of Solar Orbiter being struck by debris is very, very, very small. Earth observation missions spend their entire life in low-Earth orbit – the most debris-filled region of space, and while they perform ‘collision avoidance manoeuvres’ a few times per year, Solar Orbiter will spend only a few minutes here as it heads towards closest approach and then leaves again, onward to Venus. 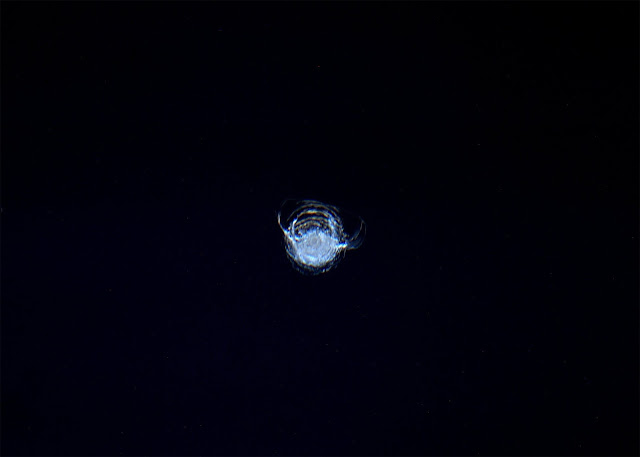 Image above: The Cupola window onboard the International Space Station developed a 7-mm chip, thought to be caused by a striking object no more than a few thousandths of a millimetre across.

However small the risk, collisions with debris at low-Earth altitudes do happen. In 2016, a solar panel on ESA’s Sentinel-1A spacecraft was struck by a particle thought to be less than five millimetres in size. Despite its size, its high relative speed meant it still damaged an area 40-cm across, leading to a small reduction in onboard power and slight changes to the orientation and orbit of the satellite. Hundreds of millions of debris particles this size are currently in orbit.

Hubble, the NASA/ESA Space Telescope, has spent 31 years in Earth orbit at an altitude of around 547 kilometres. In that time, it has witnessed the skies fill with satellites and debris and felt the impact, as its own solar panels have been bombarded and degraded by small debris particles.

Animation above: In April 2020, BepiColombo flew by Earth with a close approach of 12 500 kilometres. ESA’s Space Debris Office also performed a collision risk analysis for this flyby as the spacecraft passed through Geostationary orbit, although it flew well above the debris-filled low-Earth orbit.

While the risk to Solar Orbiter during its upcoming Earth flyby is small, it’s still “non-zero”. It didn’t face this risk as it swung by Venus, nor did ESA’s Space Debris Office have to perform collision risk analysis as BepiColombo recently zipped by Mercury, or when Cassini–Huygens flew by Jupiter.

Past Earth flybys, for example, when Cassini/Huygens flew by Earth in 1999, as Rosetta returned three times in 2005, 2007 and 2009, and Juno swung by in 2013, there were fewer satellites, fewer debris and no ‘mega constellations’ in orbit. A flyby of Earth today, while still safe, is riskier than it used to be.

ESA’s Space Debris Office recently began risk assessments based on Solar Orbiter’s trajectory and the expected position of catalogued objects in orbit around Earth, providing a collision probability for any specific close approaches. 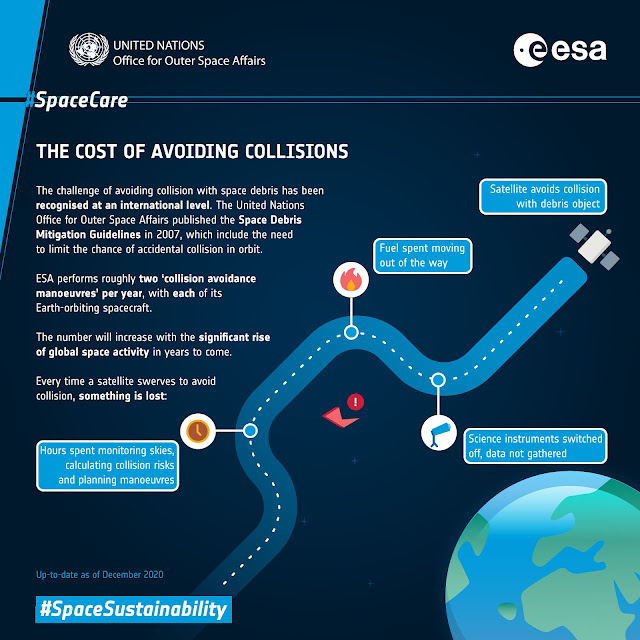 In these cases, uncertainty begins high but narrows as the orbits of objects evolve. As the moment of close approach gets nearer, our observational data improves, reducing the uncertainties in the location of objects involved. As is nearly always the case, the more we know about the position of two objects, the surer we are that they will safely pass each other.

Sometimes, however, as time passes and a close approach beckons, the chance of collision increases. For each of the Sentinel missions in Earth orbit, a collision avoidance manoeuvre is performed about once every five to six months when the ‘miss distance’ with another object is considered too risky.

Once Solar Orbiter comes up from low-Earth orbit and passes above geostationary orbit it is out of the risk zone. This should be about one hour after its minimum distance to Earth.

As the mission zooms off, flying with ever-so-slightly less energy than it arrived with, it and its mission teams will never have to consider space debris again. For missions still in orbit, and for those yet to be launched, the situation in space is becoming ever more worrisome.

After decades of launches, with little thought of what would be done with satellites at the end of their lives, our space environment has become littered with space debris. While Solar Orbiter zips by, passing just momentarily through Earth’s orbital highways, it’s an important reminder that the space debris problem is unique to Earth, of our own making, and ours to clean up.

Find out how ESA is working to prevent further debris from being created and clean up what is already out there.