Five years of Mars Express gravity mapping data are providing unique insights into what lies beneath the Red Planet’s largest volcanoes. The results show that the lava grew denser over time and that the thickness of the planet's rigid outer layers varies across the Tharsis region.

The measurements were made while Mars Express was at altitudes of between 275–330 km above the Tharsis volcanic ‘bulge’ during the closest points of its eccentric orbit, and were combined with data from NASA’s Mars Reconnaissance Orbiter.

The Tharsis bulge includes Olympus Mons – the tallest volcano in the Solar System, at 21 km – and the three smaller Tharsis Montes that are evenly spaced in a row.

The region is thought to have been volcanically active until 100-250 million years ago, relatively recent on a geological timescale.

The large mass of the volcanoes caused tiny ‘wobbles’ in the trajectory of Mars Express as it flew overhead; these were measured from Earth via radio tracking and translated into measurements of density variations below the surface.

Overall, the high density of the volcanoes corresponds to a basaltic composition that is in agreement with the many martian meteorites that have fallen to Earth. 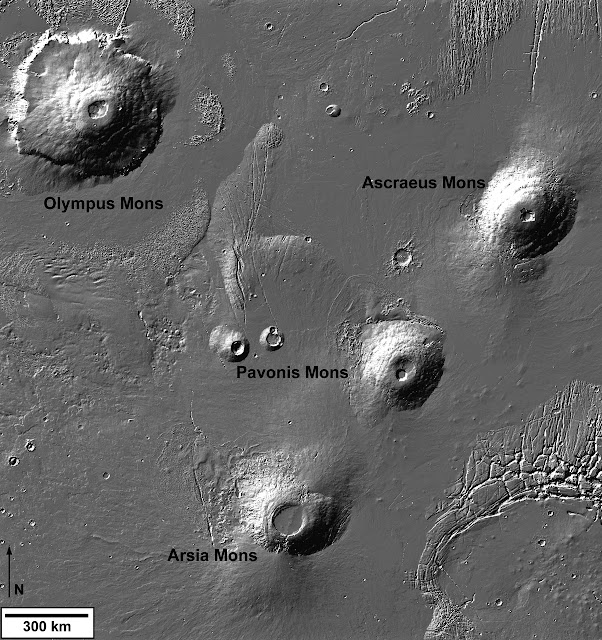 The new data also reveal how the lava density changed during the construction of the three Tharsis Montes volcanoes. They started with a lighter andesitic lava that can form in the presence of water, and were then overlaid with heavier basaltic lava that makes up the visible surface of the martian crust.

“Combined with the varying height of the volcanoes, we can say that Arsia Mons is the oldest, then Pavonis Mons formed and finally Ascraeus Mons,” says Mikael Beuthe of the Royal Observatory of Belgium and lead author of the paper published in the Journal of Geophysical Research.

At Ascraeus Mons, however, the density of the lava decreased at a later stage, so that the top of the volcano is of lower density.”

The transition could reflect changes in heating beneath the surface in the form of a single mantle plume – an upwelling of abnormally hot rock from deeper within the viscous mantle, created in a process that can be likened to a lava lamp but on a gigantic scale – that slowly moved sideways to create each of the three Tharsis Montes in turn. This is the exact opposite of Earth where ‘plates’ of crust move above a stationary plume to form chains of volcanoes, such as the Hawaiian islands.

The data also describe the thickness of the lithosphere – the outermost shell of the planet, including the upper portion of the mantle – and find surprising lateral variations between Olympus Mons and the Tharsis Montes, with the three smaller volcanoes having a much higher density underground ‘root’ than Olympus Mons. 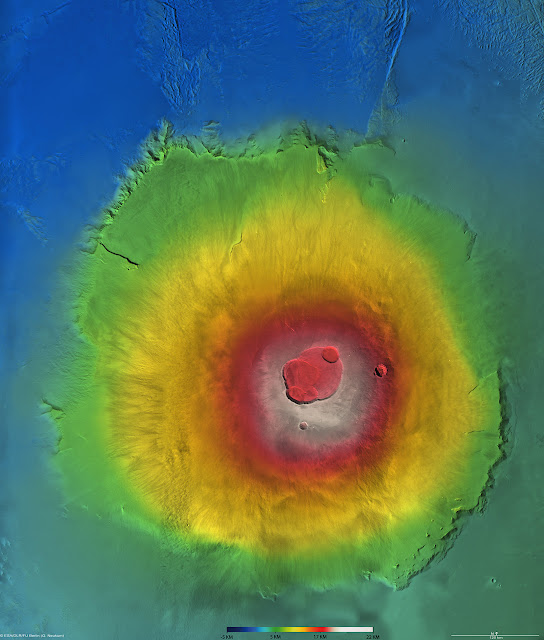 These roots could be dense pockets of solidified lava or an ancient network of underground magma chambers.

“The lack of a high-density root below Olympus Mons indicates it was built on a lithosphere of high rigidity, while the other volcanoes partially sank into a less rigid lithosphere,” says co-author Veronique Dehant, also of the Royal Observatory of Belgium. “This tells us that there were large spatial variations in the heat flux from the mantle at the time of their formation.”

Since the three Tharsis Montes sit on top of the Tharsis bulge, whereas Olympus Mons stands on the edge, the greater crustal thickness at the centre may have acted as an insulating lid to increase the temperature, creating a less rigid lithosphere. Here rising magma interacted with the pre-existing bulge, whereas the magma forming Olympus Mons ascended through the older crust that is supporting the Tharsis bulge, perhaps creating the observed density differences between the volcanoes.

“These results show that data on the Mars interior are key to understanding the evolution of the Red Planet,” says Olivier Witasse, ESA Mars Express Project Scientist. “One option for a future mission to Mars would be a network of small landers, simultaneously measuring seismic activity in order to probe the interior.