Two very different gas clouds in the galaxy next door 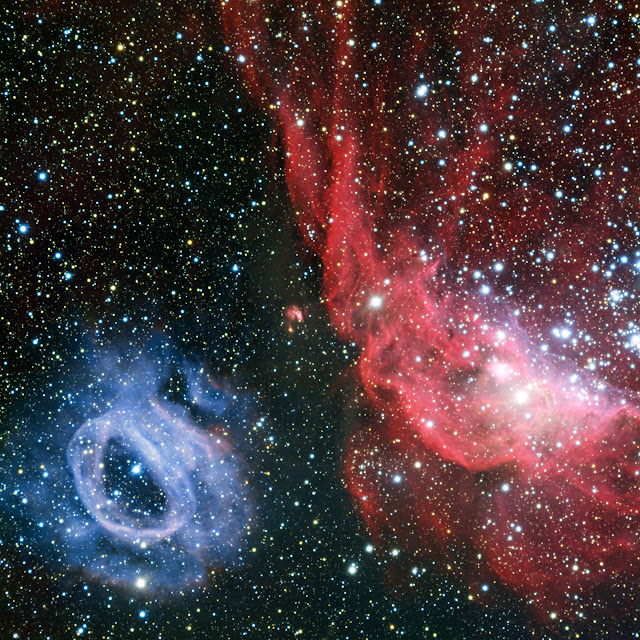 ESO’s Very Large Telescope has captured an intriguing star-forming region in the Large Magellanic Cloud — one of the Milky Way’s satellite galaxies. This sharp image reveals two distinctive glowing clouds of gas: red-hued NGC 2014, and its blue neighbour NGC 2020. While they are very different, they were both sculpted by powerful stellar winds from extremely hot newborn stars that also radiate into the gas, causing it to glow brightly.

This image was taken by the Very Large Telescope (VLT) at ESO's Paranal Observatory in Chile — the best place in the southern hemisphere for astronomical observing. But even without the help of telescopes like the VLT, a glance towards the southern constellation of Dorado (The Swordfish or Dolphinfish [1]) on a clear, dark night reveals a blurry patch which, at first sight, appears to be just like a cloud in the Earth's atmosphere. 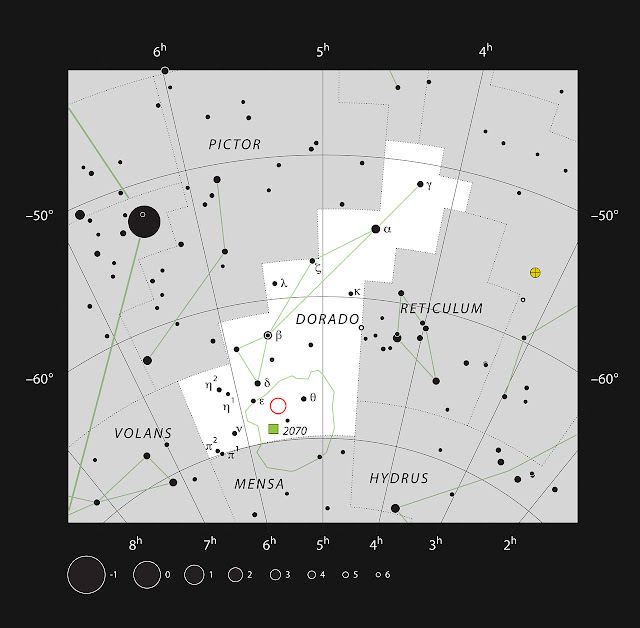 At least, this may have been explorer Ferdinand Magellan's first impression during his famous voyage to the southern hemisphere in 1519. Although Magellan himself was killed in the Philippines before his return, his surviving crew announced the presence of this cloud and its smaller sibling when they returned to Europe, and these two small galaxies were later named in Magellan's honour. However, they were undoubtedly seen by both earlier European explorers and observers in the southern hemisphere, although they were never reported.

The Large Magellanic Cloud (LMC) is actively producing new stars. Some of its star-forming regions can even be seen with the naked eye, for example, the famous Tarantula Nebula. However, there are other smaller — but no less intriguing — regions that telescopes can reveal in intricate detail. This new VLT image explores an oddly mismatched pair: NGC 2014 and NGC 2020. 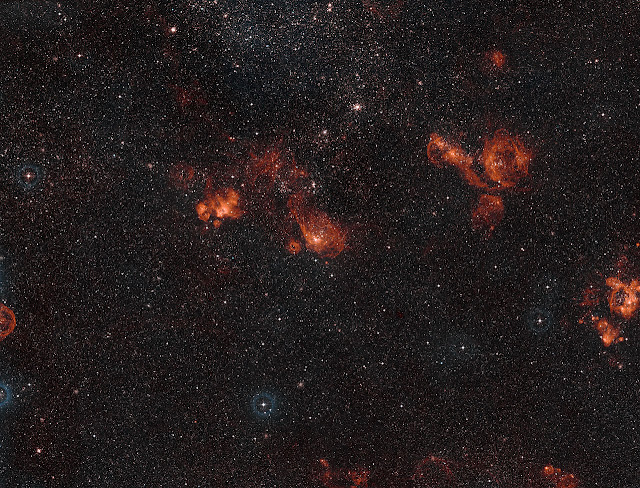 The pink-tinged cloud on the right, NGC 2014, is a glowing cloud of mostly hydrogen gas. It contains a cluster of hot young stars. The energetic radiation from these new stars strips electrons from the atoms within the surrounding hydrogen gas, ionising it and producing a characteristic red glow.

In addition to this strong radiation, massive young stars also produce powerful stellar winds that eventually cause the gas around them to disperse and stream away. To the left of the main cluster, a single brilliant and very hot star [2] seems to have started this process, creating a cavity that appears encircled by a bubble-like structure called NGC 2020. The distinctive blueish colour of this rather mysterious object is again created by radiation from the hot star — this time by ionising oxygen instead of hydrogen.

The strikingly different colours of NGC 2014 and NGC 2020 are the result of both the different chemical makeup of the surrounding gas and the temperatures of the stars that are causing the clouds to glow. The distances between the stars and the respective gas clouds also play a role.

The LMC is only about 163 000 light-years from our galaxy, the Milky Way, and so is very close on a cosmic scale. This proximity makes it a very important target for astronomers, as it can be studied in far more detail than more distant systems. It was one of the motivations for building telescopes in the southern hemisphere, which led to the establishment of ESO over 50 years ago. Although enormous on a human scale, the LMC contains less than one tenth of the mass of the Milky Way, and spans just 14 000 light-years — by contrast, the Milky Way covers some 100 000 light-years. Astronomers refer to the LMC as an irregular dwarf galaxy; its irregularity, combined with its prominent central bar of stars, suggests that interactions with the Milky Way and another nearby galaxy, the Small Magellanic Cloud, could have caused its chaotic shape.

This image was acquired using the visual and near-ultraviolet FOcal Reducer and low dispersion Spectrograph (FORS2) instrument attached to ESO's VLT, as part of the ESO Cosmic Gems programme [3].

[1] Although this constellation is often identified with the swordfish there are reasons to think that the less commonly known dolphinfish may be a better match. More details are given here.

[2] This star is an example of a rare class called Wolf-Rayet stars. These short-lived objects are very hot — their surfaces can be more than ten times as hot as the surface of the Sun — and very bright and dominate the regions around them.

[3] This picture comes from the ESO Cosmic Gems programme, an outreach initiative to produce images of interesting, intriguing or visually attractive objects using ESO telescopes, for the purposes of education and public outreach. The programme makes use of telescope time that cannot be used for science observations. All data collected may also be suitable for scientific purposes, and are made available to astronomers through ESO’s science archive.

Images taken with the VLT: http://www.eso.org/public/images/archive/search/?adv=&facility=31