In a paper published in the journal Nature Communications today, the ALPHA experiment at CERN's Antiproton Decelerator (AD) reports a measurement of the electric charge of antihydrogen atoms, finding it to be compatible with zero to eight decimal places. Although this result comes as no surprise, since hydrogen atoms are electrically neutral, it is the first time that the charge of an antiatom has been measured to high precision. 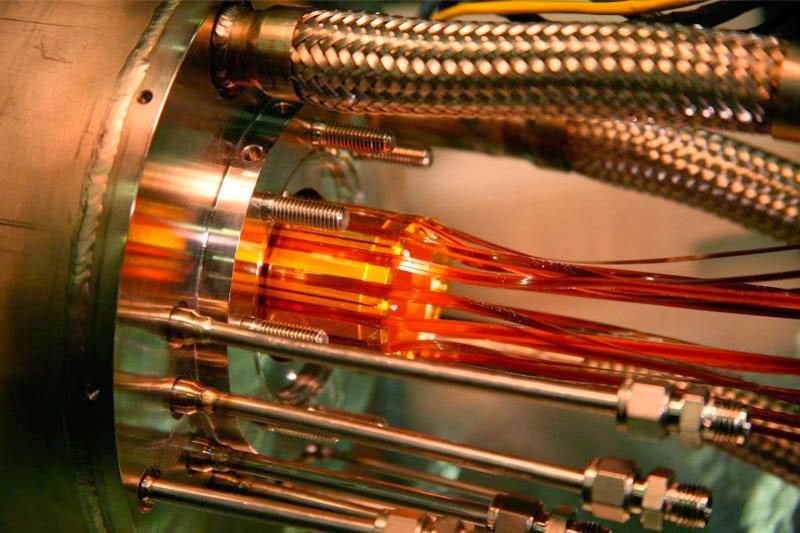 Image above: Detail of the ALPHA experiment: Insertion of the ALPHA Penning trap into the cryostat that holds the antihydrogen trapping magnets (Image: Niels Madsen).

Antiparticles should be identical to matter particles except for the sign of their electric charge. So while the hydrogen atom is made up of a proton with charge +1 and an electron with charge -1, the antihydrogen atom consists of a charge -1 antiproton and a charge +1 positron. We know, however, that matter and antimatter are not exact opposites – nature seems to have a one-part in 10 billion preference for matter over antimatter, so it is important to measure the properties of antimatter to great precision: the principal goal of CERN’s AD experiments. ALPHA achieves this by using a complex system of particle traps that allow antihydrogen atoms to be produced and stored for long enough periods to study in detail. Understanding matter antimatter asymmetry is one of the greatest challenges in physics today. Any detectable difference between matter and antimatter could help solve the mystery and open a window to new physics. 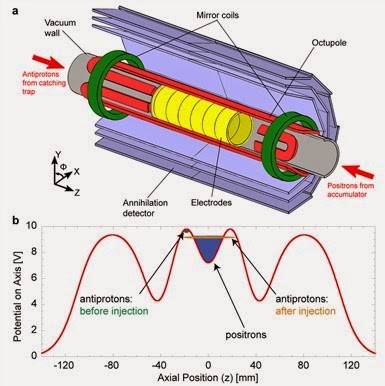 Diagram above: A diagram of the region where antihydrogen is synthesized and trapped in ALPHA. Bottom a diagram of the electric potential in the trap region. Credit: Nature.

With the restart of CERN’s accelerator chain getting underway, the laboratory’s antimatter research programme is set to resume. Experiments including ALPHA-2, an upgraded version of the ALPHA experiment, will be taking data along with the ATRAP and ASACUSA experiments and newcomer AEGIS, which will be studying the influence of gravity on antihydrogen.

Read more: "An experimental limit on the charge of antihydrogen" – Nature Communications: http://www.nature.com/ncomms/2014/140603/ncomms4955/full/ncomms4955.html