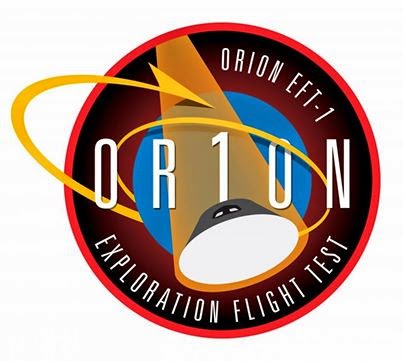 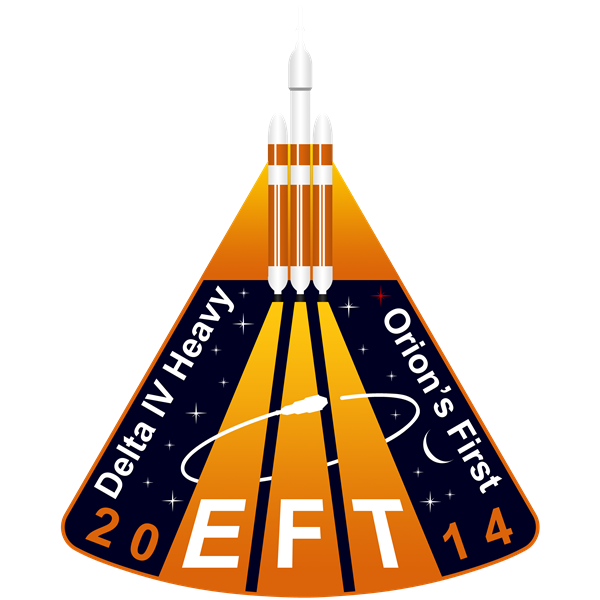 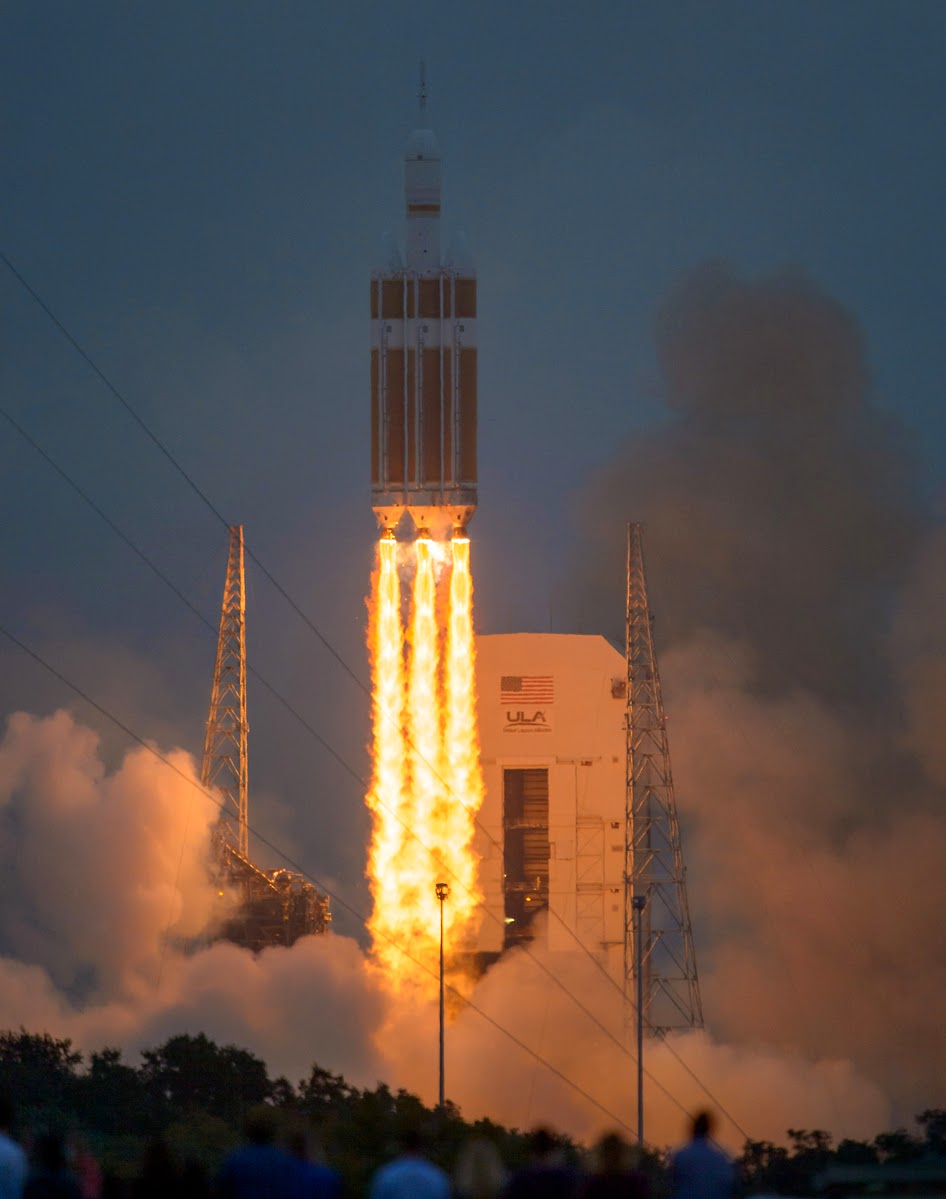 The Orion spacecraft is heading into orbit on the brilliant fire and power of the United Launch Alliance Delta IV Heavy rocket! Orion launched from Cape Canaveral this morning at 7:05 a.m EST (12:05 GMT). 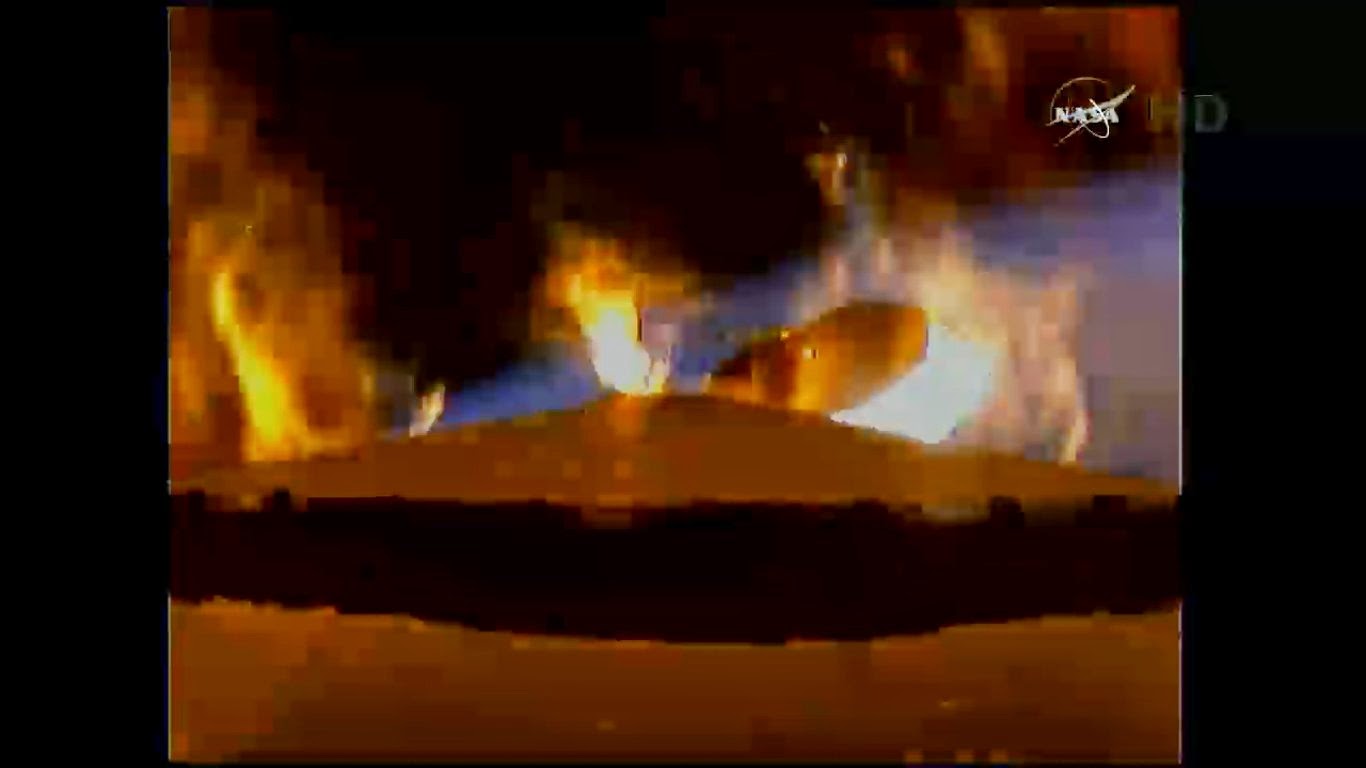 The core stages to the left and right on the rocket burned through their propellants in less than four minutes and have fallen away. A single core stage is now powering Orion toward space. The second stage will take over in 93 seconds. 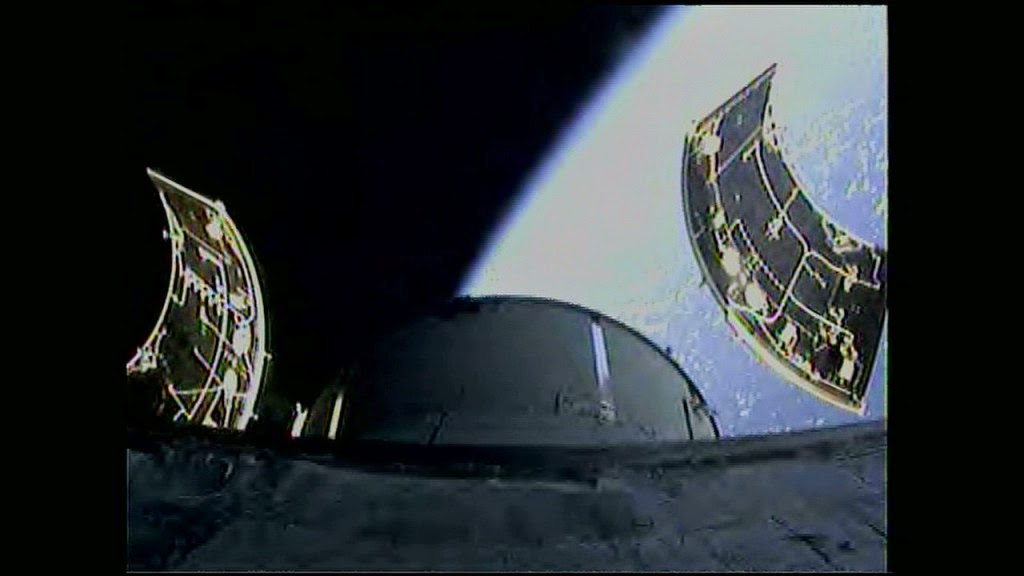 A camera aboard the Delta IV Heavy recorded the separation of the fairing panels over the Orion service module during the climb into orbit. The fairing provided structural support during the early phases of launch. 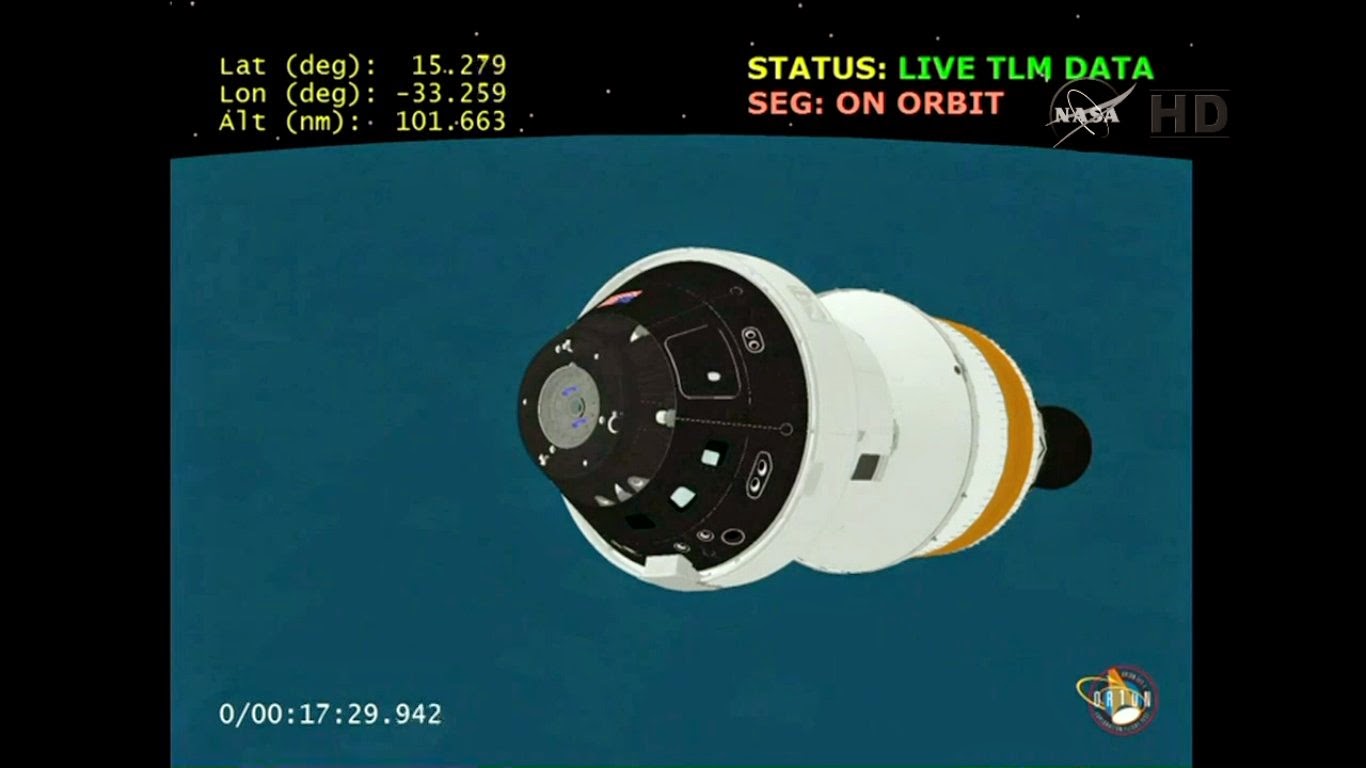 The second stage engine completed its first burn and Orion is in orbit now, on a path that is about 560 miles by 120 miles above Earth. There will be another burn by the Delta IV second stage to lift its orbit and then push it out 3,600 miles from Earth. For now, though, Orion begins a coast phase of about 97 minutes. The second stage will reignite at the 1 hour, 55 minute, 26 second point of the mission. The coast phase will allow flight controllers to continue evaluating telemetry coming down from the spacecraft and make sure Orion is healthy thus far in its mission.

The single engine of the second stage is firing now, using its 24,750 pounds of thrust to push Orion higher above Earth. This burn will last 4 minutes and 42 seconds and place Orion on a path through the Van Allen radiation belts and then back to Earth’s atmosphere at high speed. 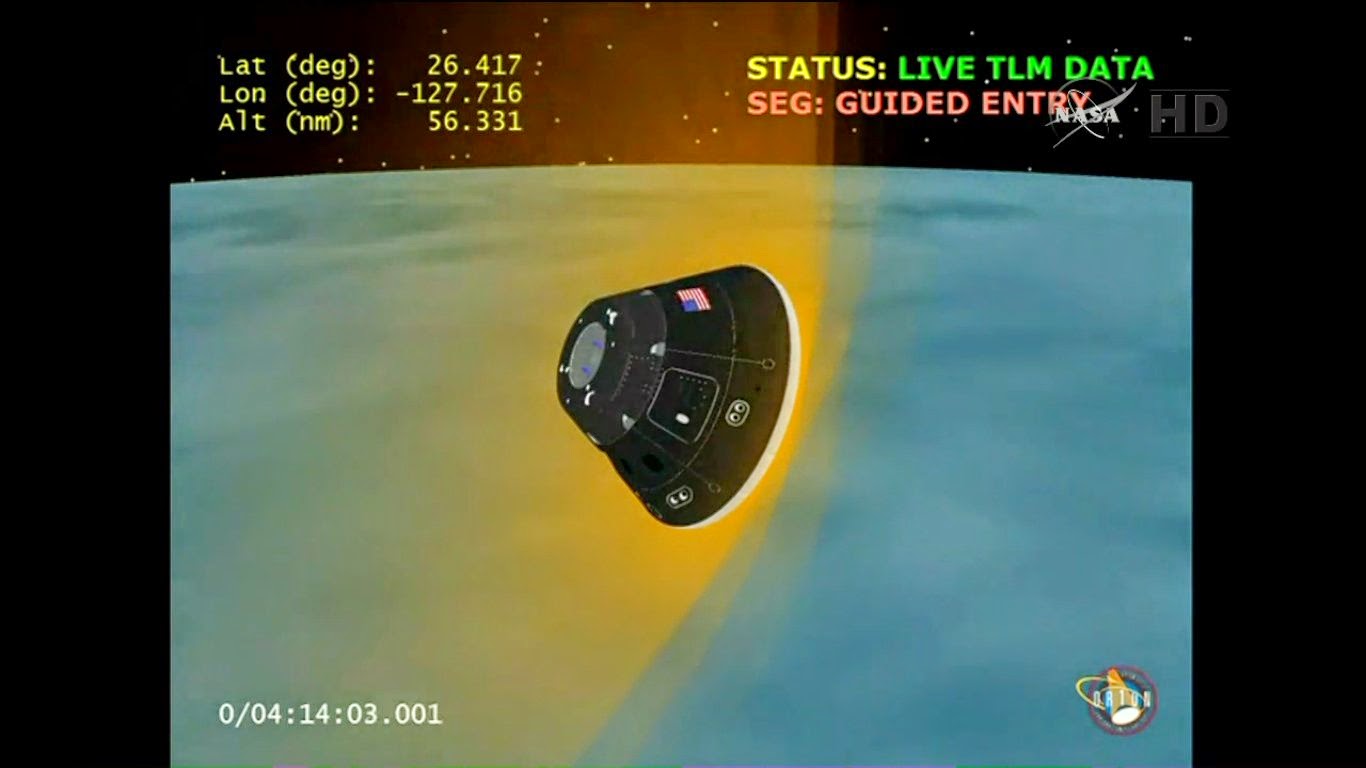 Orion continues to slow down quickly as the atmosphere it flies through gets thicker and thicker. The thickening air also generates more heat and the spacecraft is now passing through that hottest part of reentry. 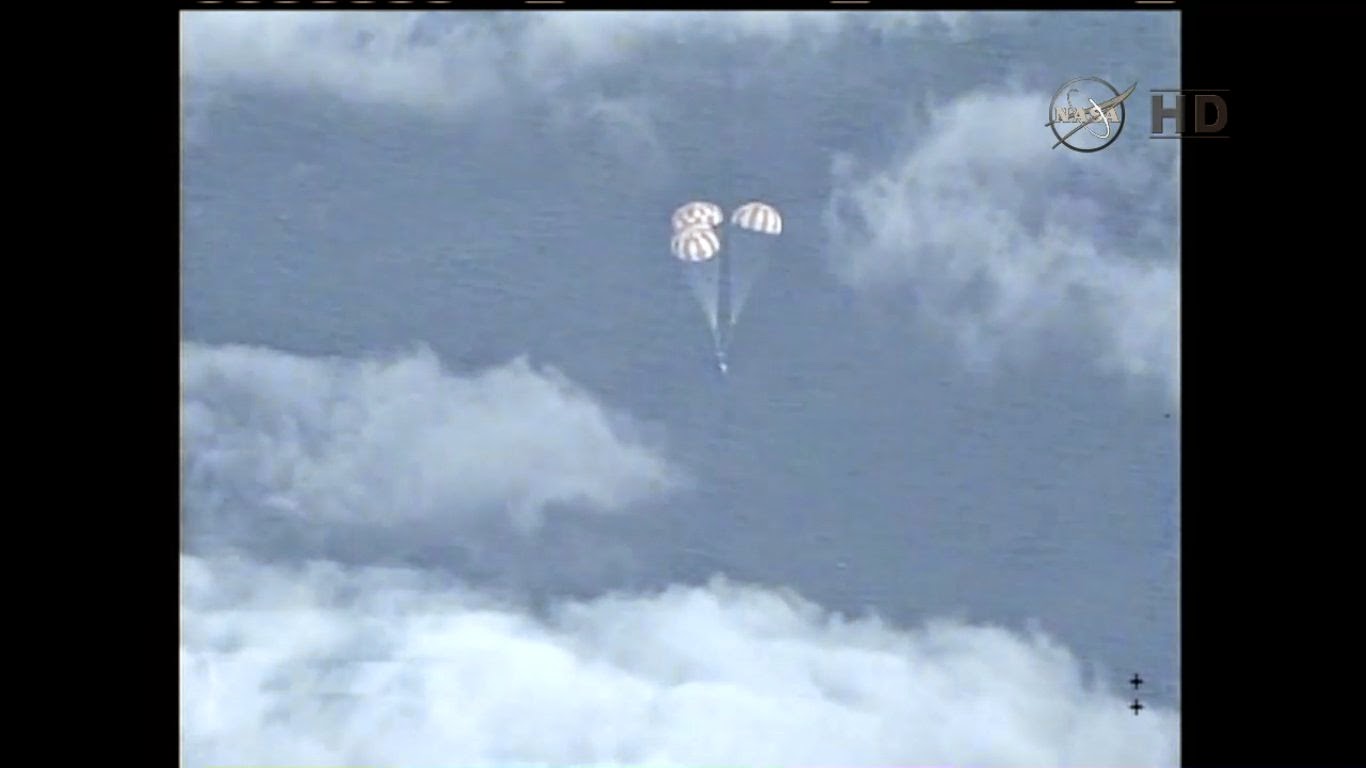 Orion is falling gently toward the Pacific Ocean surface under three parachutes that combined would cover a football field.

Orion on the Ocean Surface 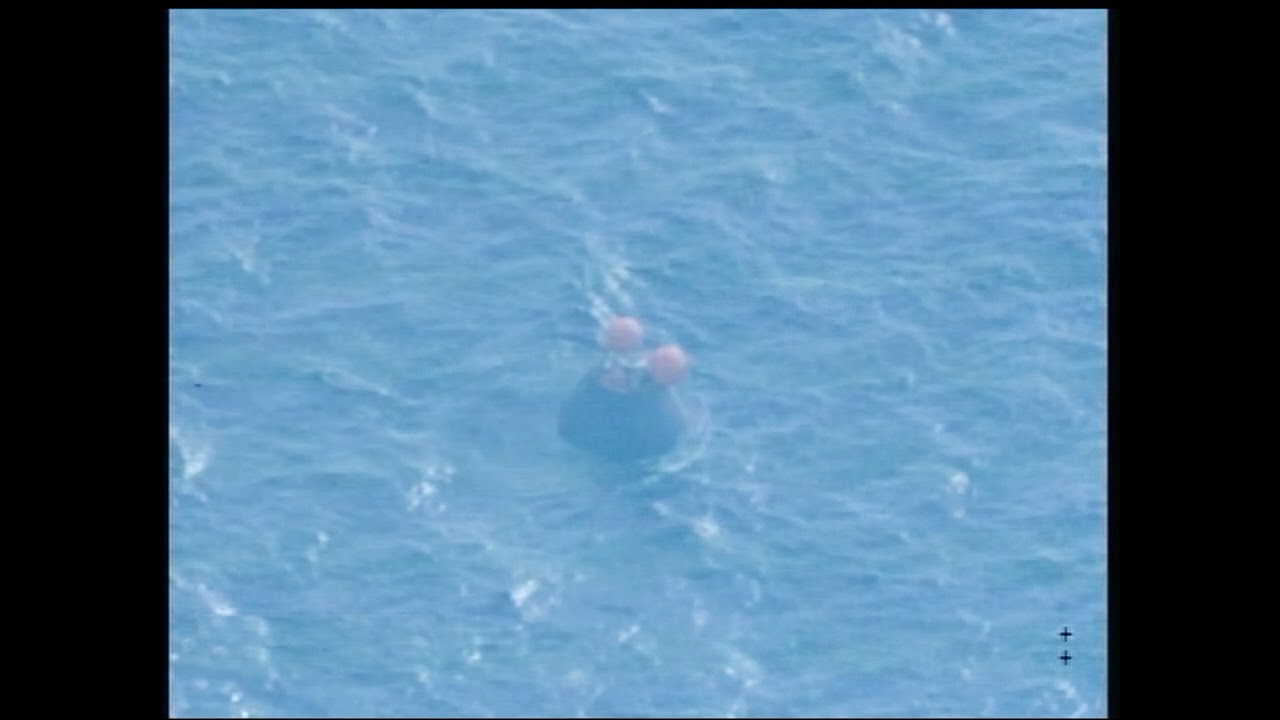 The Orion capsule landed upright on its base in a position called Stable 1 and remains in Stable 1 as it floats on the Pacific’s surface. The spacecraft’s systems performed perfectly throughout the mission including two passes through the Van Allen radiation belts and the heat of re-entry.


Orion Splashes Down in the Pacific Ocean

Critical Step on the Journey to Mars

The Orion crew module splashed down in the Pacific Ocean approximately 600 southwest of San Diego at 11:29 a.m. EST. Flight controllers have reported that the spacecraft is in a stable configuration. The recovery team from NASA, the U.S. Navy and Lockheed Martin will perform initial recovery operations, including safing the crew module and towing it into the well deck of the USS Anchorage ahead of its return to U.S. Naval Base, San Diego and then on to NASA’s Kennedy Space Center in Florida. Orion launched from Cape Canaveral this morning at 7:05 a.m. EST (12:05 GMT).

Orion Explore and Beyond