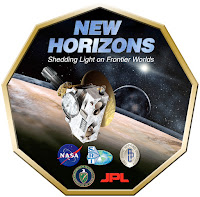 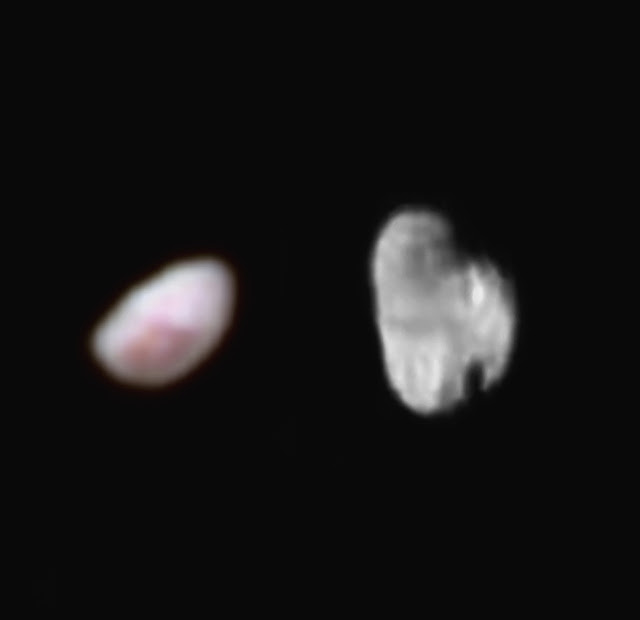 Image above: Pluto’s moon Nix (left), shown here in enhanced color as imaged by the New Horizons Ralph instrument, has a reddish spot that has attracted the interest of mission scientists.  The data were obtained on the morning of July 14, 2015, and received on the ground on July 18.  At the time the observations were taken New Horizons was about 102,000 miles (165,000 km) from Nix. The image shows features as small as approximately 2 miles (3 kilometers) across on Nix, which is estimated to be 26 miles (42 kilometers) long and 22 miles (36 kilometers) wide. Image Credit: NASA/JHUAPL/SWRI.

Pluto’s small, irregularly shaped moon Hydra (right) is revealed in this black and white image taken from New Horizons’ LORRI instrument on July 14, 2015, from a distance of about 143,000 miles (231,000 kilometers). Features as small as 0.7 miles (1.2 kilometers) are visible on Hydra, which measures 34 miles (55 kilometers) in length.

While Pluto’s largest moon Charon has grabbed most of the lunar spotlight so far, these two smaller and lesser-known satellites are now getting some attention.  Nix and Hydra – the second and third moons to be discovered – are approximately the same size, but their similarity ends there.

New Horizons’ first color image of Pluto’s moon Nix, in which colors have been enhanced, reveals an intriguing  region on the jelly bean-shaped satellite, which is estimated to be 26 miles (42 kilometers) long and 22 miles (36 kilometers) wide.

Although the overall surface color of Nix is neutral grey in the image, the newfound region has a distinct red tint.  Hints of a bull’s-eye pattern lead scientists to speculate that the reddish region is a crater. “Additional compositional data has already been taken of Nix, but is not yet downlinked. It will tell us why this region is redder than its surroundings,” said mission scientist Carly Howett, Southwest Research Institute, Boulder, Colorado. She added, “This observation is so tantalizing, I’m finding it hard to be patient for more Nix data to be downlinked.”

Meanwhile, the sharpest image yet received from New Horizons of Pluto’s satellite Hydra shows that its irregular shape resembles the state of Michigan. The new image was made by the Long Range Reconnaissance Imager (LORRI) on July 14, 2015 from a distance of 143,000 miles (231,000 kilometers), and shows features as small as 0.7 miles (1.2 kilometers) across. There appear to be at least two large craters, one of which is mostly in shadow. The upper portion looks darker than the rest of Hydra, suggesting a possible difference in surface composition. From this image, mission scientists have estimated that Hydra is 34 miles (55 kilometers) long and 25 miles (40 kilometers) wide. Commented mission science collaborator Ted Stryk of Roane State Community College in Tennessee, “Before last week, Hydra was just a faint point of light, so it's a surreal experience to see it become an actual place, as we see its shape and spot recognizable features on its surface for the first time.”

Images of Pluto’s most recently discovered moons, Styx and Kerberos, are expected to be transmitted to Earth no later than mid-October.

Nix and Hydra were both discovered in 2005 using Hubble Space Telescope data by a research team led by New Horizons project scientist Hal Weaver, Johns Hopkins University Applied Physics Laboratory, Laurel, Maryland. New Horizons’ findings on the surface characteristics and other properties of Nix and Hydra will help scientists understand the origins and subsequent history of Pluto and its moons.

New Horizons Close-Up of Charon’s ‘Mountain in a Moat’ 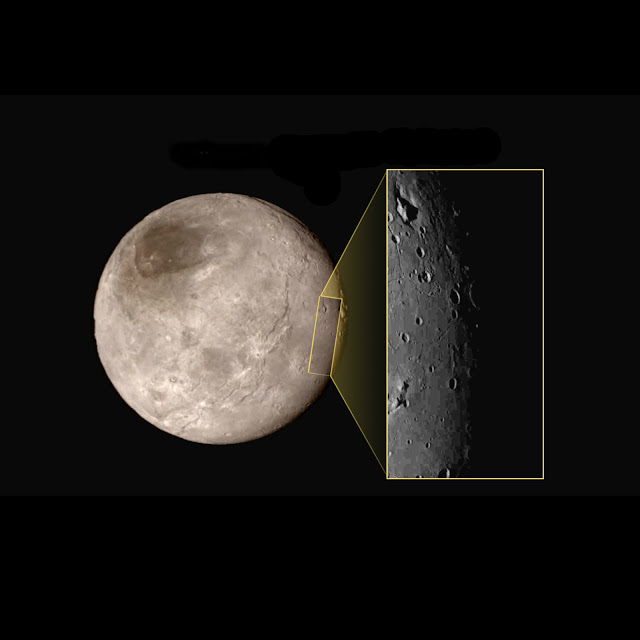 This new image of an area on Pluto's largest moon Charon has a captivating feature—a depression with a peak in the middle, shown here in the upper left corner of the inset. Image Credit: NASA-JHUAPL-SwRI.

The image shows an area approximately 240 miles (390 kilometers) from top to bottom, including few visible craters. “The most intriguing feature is a large mountain sitting in a moat,” said Jeff Moore with NASA’s Ames Research Center, Moffett Field, California, who leads New Horizons’ Geology, Geophysics and Imaging team. “This is a feature that has geologists stunned and stumped.”

This image gives a preview of what the surface of this large moon will look like in future close-ups from NASA's New Horizons spacecraft. This image is heavily compressed; sharper versions are anticipated when the full-fidelity data from New Horizons' Long Range Reconnaissance Imager (LORRI) are returned to Earth.

The rectangle superimposed on the global view of Charon shows the approximate location of this close-up view.