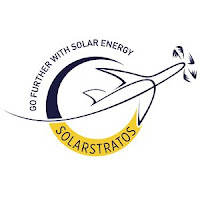 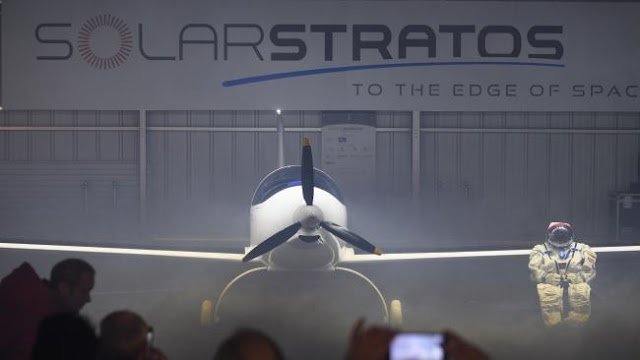 Image above: The main goal of the SolarStratos Mission project is to be the first solar flight ever made to perform in 2018, with a climb to more than 75,000 feet, a stratospheric flight. Picture: Laurent Gillieron/Credit: AP.

Just months after two Swiss pilots completed a historic round-the-world trip in a Sun-powered plane, another Swiss adventurer on Wednesday unveiled a solar plane aimed at reaching the stratosphere.

The SolarStratos, a sleek, white two-seater aircraft with long wings covered with 22 square metres of solar panels, is set to become the first manned solar plane to make a stratospheric flight, according to Raphael Domjan, who is behind the project.

“Our goal is to demonstrate that current technology offers us the possibility to achieve above and beyond what fossil fuels offer,” he said in a statement, after unveiling the plane at the Payerne air base in western Switzerland. 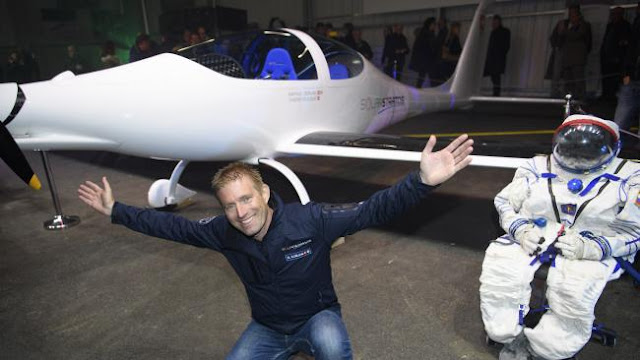 Image above: Swiss adventurer Raphael Domjan poses with the solar-powered plane SolarStratos during the roll out ceremony at the air base in Payerne, Switzerland. Picture: Laurent Gillieron/Credit: AP.

“Electric and solar vehicles are amongst the major challenges of the 21st century,” said the 44-year-old, adding that the SolarStratos “can fly at an altitude of 25,000 metres.”

SolarStratos is scheduled to begin test flights next February, while medium altitude flights are planned for next summer, and the first stratospheric flights should take place in 2018, the statement said.

To keep down the weight, the plane will not be pressurised, and Mr Domjan will wear a spacesuit, also powered by solar energy, which will also mark a world first, it added. 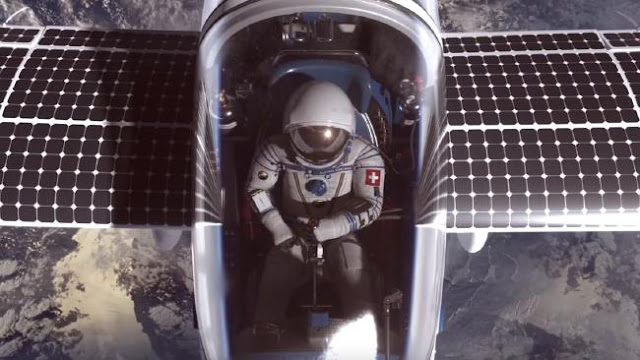 Image above: The invention is set to become the first manned solar plane to make a stratospheric flight. Image Credit: SolarStratos.

The statement also claimed the craft could “reach space”.

“Travelling to the stratosphere will take approximately five hours: 2.5 hours to reach space, 15 minutes of broad daylight and stars, then three hours to return to Earth,” it said.


SolarStratos, to the edge of space

Aeronautics engineers use a rough benchmark called the Karman line, located at about 100,000 metres above sea level, for defining the boundary between Earth’s atmosphere and space.

The announcement came after two of Domjan’s compatriots, Bertrand Piccard and Andre Borschberg, completed the first-ever round-the-globe trip in a solar plane last July, in a bid to showcase the possibilities for the future of renewable energy.

Solar Impulse 2 circumnavigated the globe in 17 stages, covering a remarkable 43,000 kilometres across four continents, two oceans and three seas, in 23 days of flying without using a drop of fuel.

Domjan meanwhile launched his SolarStratos project in 2014, two years after he became the first person to sail around the world in a fully solar-powered boat. 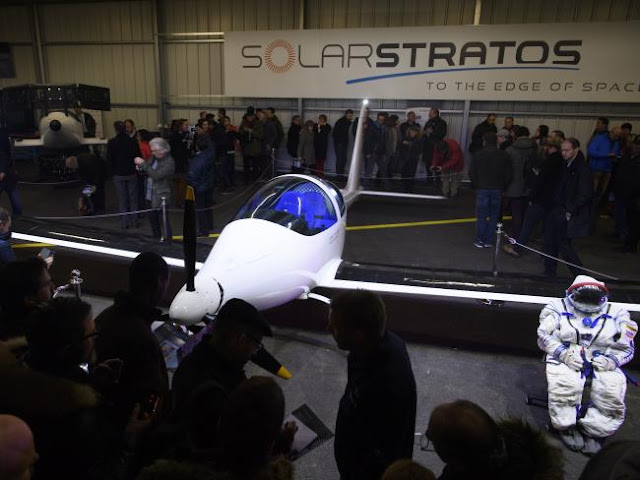 He insisted Wednesday that the new aircraft’s ability to pierce the stratosphere “opens the door to the possibility of electric and solar commercial aviation, close to space.” Until now, reaching the stratosphere has until now required large quantities of energy or helium.

But the SolarStratos aircraft, could do so leaving only “the equivalent environmental footprint of an electric car”, Wednesday’s statement said.

The project “opens the door to new scientific knowledge, at an affordable price, exploration and the peaceful use of our stratosphere,” said Roland Loos, who heads SolarXplorers, the organisation in charge of developing the project.