Webb Telescope to Make a Splash in Search for Interstellar Water 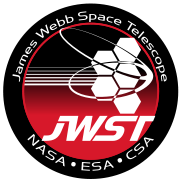 Water is crucial for life, but how do you make water? Cooking up some H2O takes more than mixing hydrogen and oxygen. It requires the special conditions found deep within frigid molecular clouds, where dust shields against destructive ultraviolet light and aids chemical reactions. NASA’s James Webb Space Telescope will peer into these cosmic reservoirs to gain new insights into the origin and evolution of water and other key building blocks for habitable planets.

A molecular cloud is an interstellar cloud of dust, gas, and a variety of molecules ranging from molecular hydrogen (H2) to complex, carbon-containing organics. Molecular clouds hold most of the water in the universe, and serve as nurseries for newborn stars and their planets.

Animation above: In this animation we fly into a protoplanetary disk surrounding a young star. Within the disk, tiny dust grains accumulate layers of ice over thousands of years. These cosmic snowflakes are swept up by forming planets, delivering key ingredients for life. Animation Credits: NASA/JPL-Caltech/R. Hurt.

Within these clouds, on the surfaces of tiny dust grains, hydrogen atoms link with oxygen to form water. Carbon joins with hydrogen to make methane. Nitrogen bonds with hydrogen to create ammonia. All of these molecules stick to the surface of dust specks, accumulating icy layers over millions of years. The result is a vast collection of “snowflakes” that are swept up by infant planets, delivering materials needed for life as we know it. "If we can understand the chemical complexity of these ices in the molecular cloud, and how they evolve during the formation of a star and its planets, then we can assess whether the building blocks of life should exist in every star system," said Melissa McClure of the Universiteit van Amsterdam, the principal investigator on a research project to investigate cosmic ices.

In order to understand these processes, one of Webb’s Director’s Discretionary Early Release Science projects will examine a nearby star-forming region to determine which ices are present where. “We plan to use a variety of Webb’s instrument modes and capabilities, not only to investigate this one region, but also to learn how best to study cosmic ices with Webb,” said Klaus Pontoppidan of the Space Telescope Science Institute (STScI), an investigator on McClure’s project. This project will take advantage of Webb’s high-resolution spectrographs to get the most sensitive and precise observations at wavelengths that specifically measure ices. Webb’s spectrographs, NIRSpec and MIRI, will provide up to five times better precision that any previous space telescope at near- and mid-infrared wavelengths.

The team, led by McClure and co-principal investigators Adwin Boogert (University of Hawaii) and Harold Linnartz (Universiteit Leiden), plans to target the Chamaeleon Complex, a star-forming region visible in the southern sky. It’s located about 500 light-years from Earth and contains several hundred protostars, the oldest of which are about 1 million years old. “This region has a bit of everything we’re looking for,” said Pontoppidan.

The team will use Webb’s sensitive infrared detectors to observe stars behind the molecular cloud. As light from those faint, background stars passes through the cloud, ices in the cloud will absorb some of the light. By observing many background stars spread across the sky, astronomers can map ices within the cloud’s entire expanse and locate where different ices form. They will also target individual protostars within the cloud itself to learn how ultraviolet light from these nascent stars promotes the creation of more complex molecules. 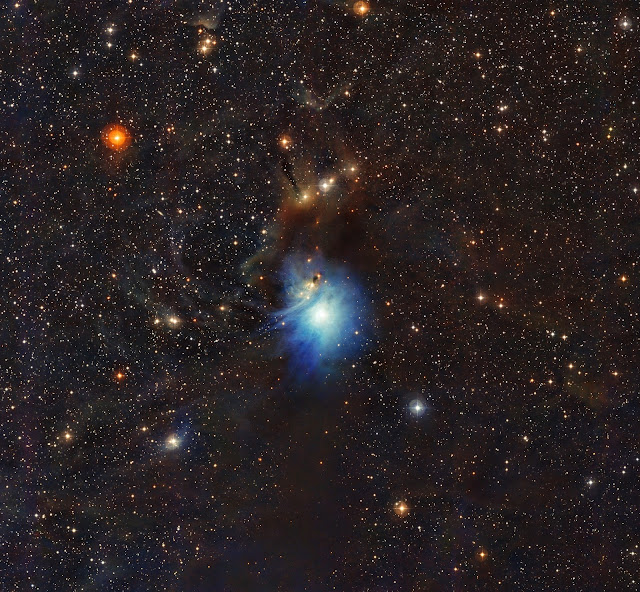 Image above: Blue light from a newborn star lights up the reflection nebula IC 2631. This nebula is part of the Chamaeleon star-forming region, which Webb will study to learn more about the formation of water and other cosmic ices. Image Credit: European Southern Observatory (ESO).

Astronomers also will examine the birthplaces of planets, rotating disks of gas and dust known as protoplanetary disks that surround newly formed stars. They will be able to measure the amounts and relative abundances of ices as close as 5 billion miles from the infant star, which is about the orbital distance of Pluto in our solar system.

“Comets have been described as dusty snowballs. At least some of the water in Earth’s oceans likely was delivered by the impacts of comets early in our solar system’s history. We’ll be looking at the places where comets form around other stars,” explained Pontoppidan.

In order to understand Webb’s observations, scientists will need to conduct experiments on Earth. Webb’s spectrographs will spread incoming infrared light into a rainbow spectrum. Different molecules absorb light at certain wavelengths, or colors, resulting in dark spectral lines. Laboratories can measure a variety of substances to create a database of molecular “fingerprints.” When astronomers see those fingerprints in a spectrum from Webb, they can then identify the molecule or family of molecules that created the absorption lines.

“Laboratory studies will help address two key questions. The first is what molecules are present. But just as important, we’ll look at how the ices got there. How did they form? What we find with Webb will help inform our models and allow us to understand the mechanisms for ice formation at very low temperatures,” explained Karin Öberg of the Harvard-Smithsonian Center for Astrophysics, an investigator on the project. 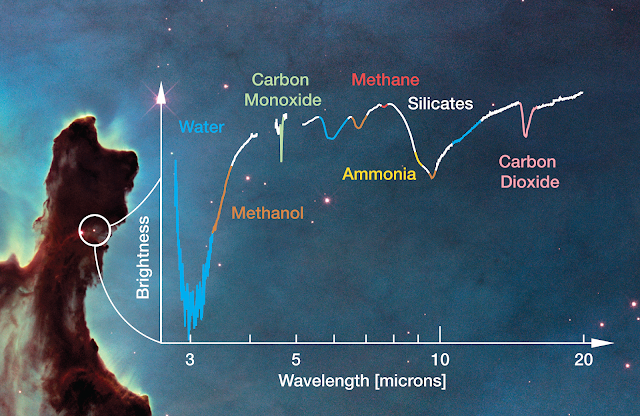 Image above: This simulated spectrum from the Webb telescope illustrates the kinds of molecules that may be detected in star-forming regions like the Eagle Nebula (background). Image Credits: NASA, ESA, the Hubble Heritage Team, and M. McClure (Universiteit van Amsterdam) and A. Boogert (University of Hawaii).

“It will take years to fully mine the data that comes out of Webb,” Öberg added.

The James Webb Space Telescope will be the world’s premier infrared space observatory of the next decade. Webb will help humanity solve the mysteries of our solar system, look beyond to distant worlds around other stars, and probe the mysterious structures and origins of our universe and our place in it. Webb is an international project led by NASA with its partners, ESA (European Space Agency) and CSA (Canadian Space Agency).