Most precise test of general relativity outside the Milky Way 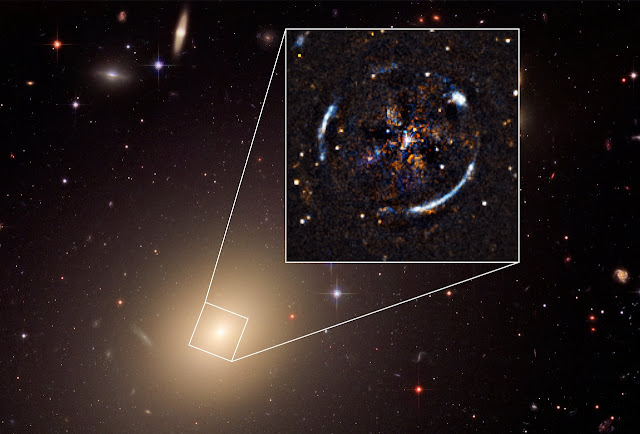 An international team of astronomers using the NASA/ESA Hubble Space Telescope and the European Southern Observatory’s Very Large Telescope has made the most precise test of general relativity yet outside our Milky Way. The nearby galaxy ESO 325-G004 acts as a strong gravitational lens, distorting light from a distant galaxy behind it to create an Einstein ring around its centre. By comparing the mass of ESO 325-G004 with the curvature of space around it, the astronomers found that gravity on these astronomical length-scales behaves as predicted by general relativity. This rules out some alternative theories of gravity. 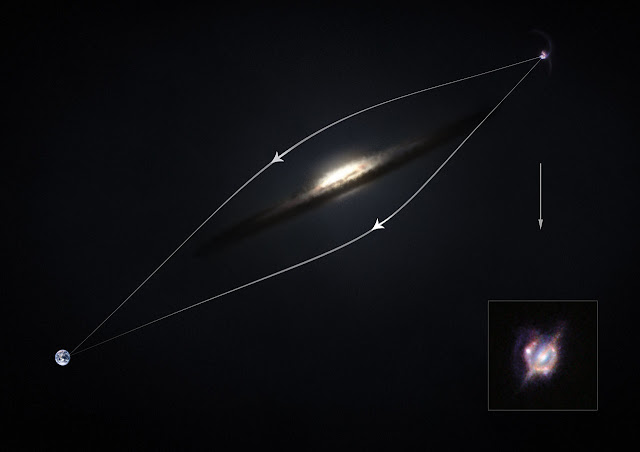 How gravitational lensing acts as a magnifying glass — diagram

Using the NASA/ESA Hubble Space Telescope and European Southern Observatory’s Very Large Telescope (VLT), a team led by Thomas Collett (University of Portsmouth, UK), was able to perform the most precise test of general relativity outside the Milky Way to date. 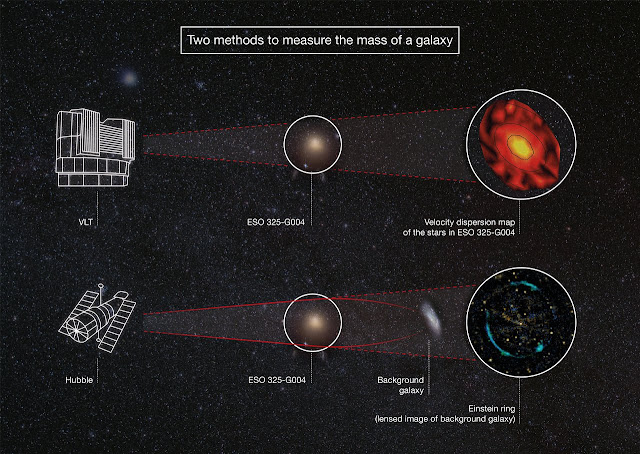 Two methods of measuring the mass of a galaxy

The theory of general relativity predicts that objects deform spacetime, causing any light that passes by to be deflected and resulting in a phenomenon known as gravitational lensing. This effect is only noticeable for very massive objects. A few hundred strong gravitational lenses are known, but most are too distant to precisely measure their mass. However, the elliptical galaxy ESO 325-G004 is amongst the closest lenses at just 450 million light-years from Earth. Collett comments: “We know the mass of the foreground galaxy from MUSE and we measured the amount of gravitational lensing we see from Hubble. We then compared these two ways to measure the strength of gravity — and the result was just what general relativity predicts, with an uncertainty of only nine percent. This is the most precise test of general relativity outside the Milky Way to date. And this using just one galaxy!”

General relativity has been tested with exquisite accuracy on Solar System scales, and the motions of stars around the black hole at the centre of the Milky Way are under detailed study, but previously there had been no precise tests on larger astronomical scales. Testing the long range properties of gravity is vital to validate our current cosmological model.


Interview with Thomas Collett about the research

These findings may have important implications for models of gravity alternative to general relativity. These alternative theories predict that the effects of gravity on the curvature of spacetime are “scale dependent”. This means that gravity should behave differently across astronomical length-scales from the way it behaves on the smaller scales of the Solar System. Collett and his team found that this is unlikely to be true unless these differences only occur on length scales larger than 6000 light-years.

“The Universe is an amazing place providing such lenses which we can use as our laboratories,” adds team member Bob Nichol (University of Portsmouth). “It is so satisfying to use the best telescopes in the world to challenge Einstein, only to find out how right he was.”

This research was presented in a paper entitled “A precise extragalactic test of General Relativity” by Collett et al., to appear in the journal Science.